Canada oh Canada, where did your spine disappear? The Canadian Foreign minister refuses to thank Taiwan 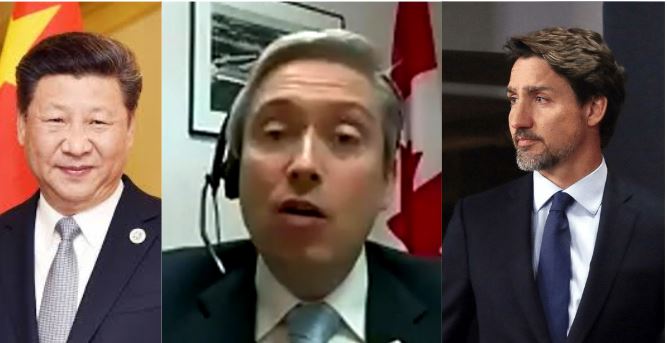 China’s pressure tactics in times of a pandemic lay bare recently, even as COVID-19, a disease birthed in China, continues to ravage large swathes of population around the world. China has been at the forefront of both, making the most out of the current pandemic monetarily, by means of ramping up production of essential medical supplies for the world, and also pretending to earn itself some sympathy by gifting supplies to certain strategic countries.

Canada received a consignment of PPE’s as a ‘donation’ from China recently, which was announced by the Communist state on March 28th. Within three hours of China making the said announcement, Canada’s Foreign Affairs Minister, Francois-Philippe Champagne turned to Twitter to thank the country directly. As a matter of fact, the man has personally tweeted his country’s immense appreciation for all other nation’s stepping up and helping Canada in times of need. However, the only country left out, incidentally, was the sovereign island-nation of Taiwan.

Thank you for this donation.

In the face of a global pandemic, supporting each other is not only the right thing to do, it’s the smart thing to do. https://t.co/rE1BZZfrCR

During a virtual sitting of Canada’s House of Commons on Thursday, Conservative MP Ed Fast accused the Trudeau government of not thanking Taiwan for their delivery of half a million surgical masks to Canada, free of cost. He also pointed out that Canada had gone out of its way to thank China, even as the PPE’s gifted by them were sub-standard and ‘defective’. On the other hand, Taiwan donating 500,000 masks to Canada barely made it to the news.

The Conservative MP asked the Foreign Minister no less than two times whether he would thank Taiwan, even as the Minister dodged the questions and did not even do so much as to name Taiwan, leave alone using the words “Thank You” and ‘Taiwan’ in the same sentence.

Want to know how to spot a panda hugger? Here's a clue: During a virtual meeting of Canada's House of Commons, Foreign Minister François-Philippe Champagne avoids mentioning Taiwan's name despite being asked twice to thank Taiwan for donating over half a million masks to Canada. pic.twitter.com/HtrH1aoqel

“Canada is grateful to all who have given supplies to Canada. This is a common endeavour,” the rather servile Minister said. “We are thankful, we are grateful to every nation. We will continue to do so. Like I said, when it comes to global health, when it comes to helping each other, I think it is the duty of all to come together,” he added, clearly refraining from acknowledging the existence of Taiwan.

Embarrassed rather publicly, Prime Minister Justin Trudeau was forced to thank Taiwan himself, as the media caught his government clearly towing the Chinese line and refusing to acknowledge Taiwan as a sovereign nation.

“Your foreign minister wouldn’t thank the country by name. Will you?” a journalist asked Trudeau during his daily briefing outside Rideau Cottage.

This is not the first time that Taiwan has been looked at as a taboo to even name. Earlier, during an interview with Hong Kong-based RTHK journalist, the WHO’s assistant director-general Bruce Aylward ended the video interview after the journalist quizzed him about Taiwan’s efforts to combat the Wuhan virus.

When asked as to whether the WHO would consider giving membership to Taiwan in the wake of the global COVID-19 pandemic and the tremendous job that the island-nation has done to contain the virus’ spread, Aylward first pretended to not hear the journalist’s question, for two consecutive times. When asked the same question a third time, the assistant Director General of the World Health Organization, bearing true faith to his Chinese masters, hung up on the journalist.

Such incidents, whether in Canada or at the hands of the WHO, go on to show how China has certain countries and organizations around the world by the collar, who dare not do so much as speak a word in defiance to their Chinese masters. China parades Taiwan as one of its own province, while the island-nation says it is a sovereign land. Acknowledging the global efforts of Taiwan in these times of a pandemic will mean that the world community recognizes the country as a separate entity from China, something which can infuriate the CCP.

In order to mollycoddle China, Canada’s Foreign Minister decided to lay prostrate in front of the CCP, even as Taiwan provided the country with half a million surgical masks, free of cost. Does one need a clearer specimen of global Chinese criminal hegemony any longer?

After unleashing coronavirus in the world, China is preparing to starve Laos, Vietnam and Cambodia