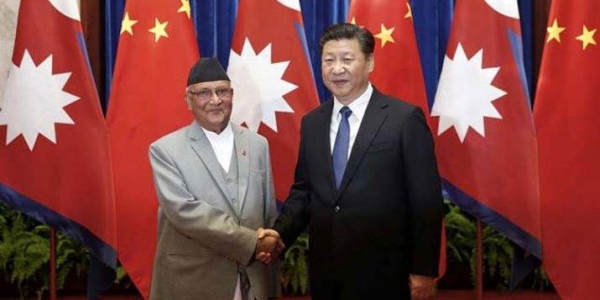 Days after Beijing rescued KP Sharma Oli, Kathmandu became suddenly hostile towards New Delhi. Days after China’s deep intervention into Nepal, India inaugurated the Dharchula-Lipulekh road link in Uttarakhand. The road is constructed on Indian territory. Construction on the project had started in 2008. For 12 years, Nepal did not object but now that India has gained a vantage point only 4 kilometres away from the LAC at the Lipulekh tri-junction, Nepal is up in arms.

The Nepalese government did not just object, it has also been making provocative moves against India. Earlier this week, it released a revised political map that shows parts of India’s territory- Lipulekh, Kalapani and Limpiyadhura, under Nepalese territory.

Nepal’s Prime Minister is himself speaking in extremely distasteful language, unbecoming of a head of government. On Wednesday, KP Sharma Oli made certain unsavoury remarks against India that can seriously jeopardise the civilizational links between the two countries.

“We are least bothered if anyone gets angry and will reclaim the land at any cost,” said Nepal’s Prime Minister taking a veiled jibe at India.

Nepal has never been as vocal about the Kalapani border dispute, but now it is ratcheting it all of a sudden. The minor territorial dispute has no strategic significance for Nepal, but it is crucial for India’s ambitions to thwart Chinese expansionism. KP Sharma Oli is helping Beijing by raking up the border dispute with India.

And KP Sharma Oli knows how raking such territorial disputes jeopardises India’s security situation. In an insensitive remark, he even brought up the 1962 Sino-India war and said, “India has deployed its troops in Kalapani since 1962 and our rulers in the past hesitated to raise the issue.”

The Communist government in Nepal downplays Chinese land grab in Nepal but blows minor disputes with India out of proportion. The next time there is a confrontation between India and Nepal, Kathmandu might support China, instead of supporting India.

KP Sharma Oli owes his retention in power to Beijing, and therefore he is speaking on the behalf of Xi Jinping instead of speaking for the Nepalese. He is threatening to severe ties with India which will adversely affect the people of Nepal, but Oli’s loyalties lie with Xi Jinping and not with the people of Nepal.

This fact is not lost on New Delhi either. Recently, Indian Army Chief MM Naravane made it clear that the Lipulekh Pass is not a dispute. He added, “There is reason to believe that they (Nepal) might have raised this issue at the behest of someone else and that is very much possibility,” in an indirect reference to China.

China is known to buy out the loyalty of leaders across the world in order to expand its influence, and it seems that Nepal’s Prime Minister KP Sharma Oli is the latest casualty.

After Huawei, Trump set to destroy Alibaba and Baidu by blocking them from American stock market