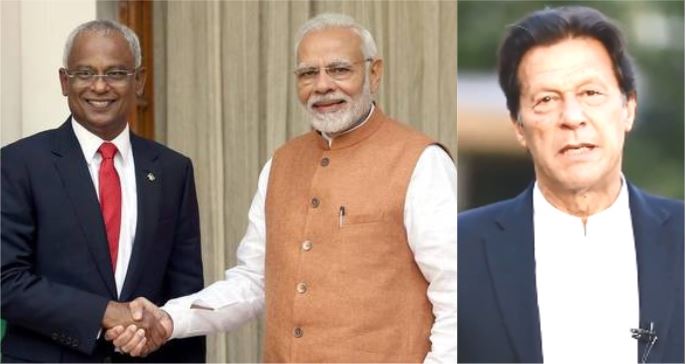 Pakistan is a desperate entity. The only platform which the joke of a nation thinks it has for flexing its muscles, is the OIC, or the Organization of Islamic Cooperation. However, thanks to the India’s increased diplomatic foothold and influence in almost every corner of the world, Pakistan was once again rendered incapacitated on the world stage.

At a virtual meeting of the OIC at the United Nations, Pakistan is believed to have undertaken a campaign to get an anti India resolution passed, which called out India for the supposed ‘Islamophobia’ that a section of people think has developed post-2014. However, Maldives thrashed the radical Islamist state called Pakistan left, right and centre for its brazen attempts at using the OIC as a platform to single out India and push its dirty agenda forward.

Ambassador Thilmeeza Hussain, the Permanent Representative of the Maldives in New York at the OIC meet said that India is the largest democracy in the world, a multicultural society paralleled to none other and home to over 200 million Muslims, which make up 14.2% of the total population, hence constituting the second largest religious group in the country. Alleging Islamophobia against such a country would be factually incorrect, he said.

Pakistan’s ambassador to the UN, Munir Akram, claimed at the online meeting of OIC that India was actively promoting an Islamophobic agenda.

“The Maldives stands firmly against such actions anywhere in the world, including Islamophobia, xenophobia or any form of violence to promote political or any other agenda. However, targeting a specific country will be like sidestepping the real issue. In this light, let me state that singling out India, the largest democracy in the world and multicultural society and home to over 200 million Muslims, alleging Islamophobia would be factually incorrect,” the permanent representative of the Maldives to OIC was quoted as saying. He further added, “Maldives cannot support any action within the OIC, that singles-out or targets India.”

Breaking: Maldives halts Pakistan's attempt to single out India on Islamophobia at OIC's virtual meet; Permant Representative of Maldives in New York Amb Thilmeeza Hussain at the meet says,"Maldives cannot support any action within the OIC, that singles-out or targets India." pic.twitter.com/A28cEWMo8V

The Organization of Islamic Cooperation is a powerful multilateral body consisting of declared Islamic nations exclusively, who work together in a bid to represent the Muslim brotherhood collectively. India has cordial relations with almost all members of the OIC, barring perhaps, Pakistan and Turkey.

In early 2019, the then Foreign Minister, Sushma Swaraj was invited to address the OIC meet in Abu Dhabi as the Guest of Honour. This showed how India, despite not being a member of the Islamic organization, had substantial foothold in it.

Meanwhile, in recent years, the relations between India and Maldives have only grown from strength to strength. India, in 1965, was among the first to recognize the independence of Maldives and establish diplomatic relations with it.

Maldives was the first country to be visited by PM Modi last year, soon after he took oath as the Prime Minister for the second term following a magnanimous mandate.  There have been a number of high-level visits between the two countries since the new government under President Solih took over in November 2018.

Maldives standing up for India among a conglomeration of Islamic nations is a testimony to the fact that no matter how hostile some fronts may look like, India has its friends everywhere, who will strive to foil all anti-India propaganda which is dolled out by an inconsequential few.