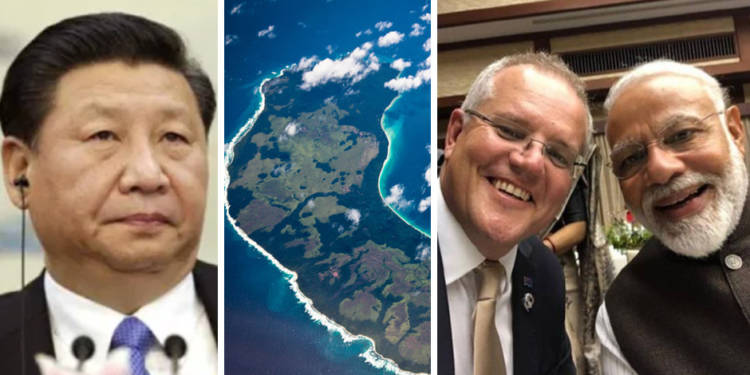 The upcoming virtual summit between Prime Minister Modi and Australia’s Prime Minister Scott Morrison could prove to be a watershed moment in maritime cooperation between India and Australia. In a development that could boost Maritime Domain Awareness (MDA) for the two countries, it has been reported that the virtual meeting could lay the foundation for mutual use of two strategically located islands- India’s Andaman & Nicobar Islands and Australia’s Cocos Islands for military purposes.

The Indian Ocean cannot be controlled by any one country due to its sheer vastness and multitude of stakeholders, unlike the South China Sea and this is why strategically located islands like the Cocos Island are crucial.

Apart from enhancing India’s presence in the vast Indian Ocean, it plugs a major loophole when it comes to India’s situational awareness in the Indian Ocean Region (IOR).

Roughly a quarter of all oil transported by sea passes through the Strait of Malacca, and this is why it is important for India. Currently, India’s presence is concentrated to the Northwest of the busy trade checkpoint through the Andaman and Nicobar Islands. Since, India’s territorial waters are limited to the North-western approaches of the Strait, much of the vast South-eastern approaches to the Malacca Strait remain a blind spot for India.

The Sunda and Lombok chokepoints which are viable Sea lines of Communication (SLOCs) remain outside India’s presence. Mutual use of Cocos Islands in the Australian external territory can correct these blindspots for India, as the Islands lie close to the Indonesian straits of Sunda, Lombok, and Ombai-Wetar.

This also helps India in capitalising upon its ambitions to make full use of its exclusive rights to explore poly-metallic nodules from the seabed in the Central Indian Ocean Basin (CIOB), which were extended by five years in the year 2017. China has been trying to make full use of sea resources through extensive research activity and has also been venturing into this part of the Indian Ocean Region (IOR).

Recently, a Chinese oceanographic ship had been detected conducting deep-water surveys around the Christmas Island, which along with Cocos Islands forms the Australian Indian Ocean territory. Such research activity is generally carried out for naval intelligence purposes and primarily submarine warfare.

What a pact on mutual use means for Australia is that it can come closer to the heart of the Indian Ocean with presence in the Andaman and Nicobar Islands, in close proximity to the Strait of Malacca.

While the Andamans lie close to the Strait of Malacca, Cocos Islands lie in close proximity to the Indonesian Straits which together form the entry and exit points of the Indian and the Pacific Oceans. This is crucial for Canberra which has a vital interest in securing the sea lanes and trade routes in the Indian Ocean Region.

Access to the Andamans will help Australia in keeping an eye on what China is upto at the Strait of Malacca. Last year, a Chinese research ship was found operating in India’s Exclusive Economic Zone (EEZ) in the region before it was ejected by India. But access to the Andamans will allow Australia to extend its military engagement to this part of the Indian Ocean- a current loophole in its Indian Ocean Policy.

Maritime collaboration through a mutual port use pact is the most ingenious way for growing diplomatic conversation amongst the Quad (India, Australia, Japan and the United States). Without losing too much to each other, Australia and India are coming close to check Chinese hegemony and allow each other to gain a significant advantage in the Indian Ocean Region (IOR).