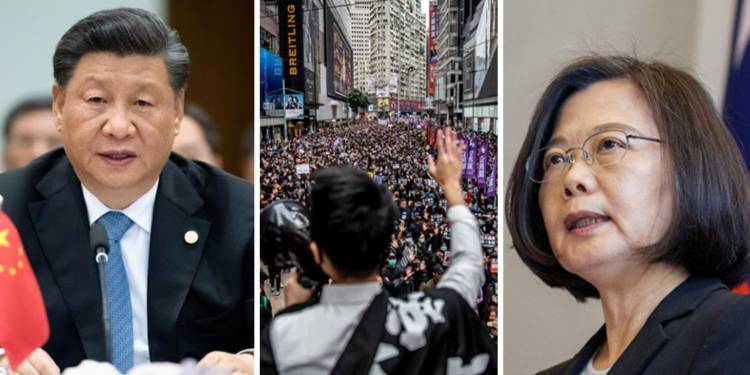 Hong Kong is again erupting against the Chinese Communist Party as China has yet again tried to undermine Hong Kong’s freedom.  In fact, it now plans to pull the plug on Hong Kong’s freedom once and for all. But protesters are already charged in the city and as things get ugly in Hong Kong, Taiwan, an island nation that is fearlessly taking on the CCP has pledged its support to Hong Kong as they jointly take on their common bully: China.

The pro-democracy protests in Hong Kong last year brought out the ugly side of the CCP as it violently cracked down on the protesters. The coronavirus pandemic saw the protestors taking a step back, but now they are out again as China plans to bring in a highly controversial national security legislation.

Under Hong Kong’s Basic Law, which is in place since 1997, it is largely has responsibility for its own internal security. However, China wants to change this and cease control of the internal security affairs of the city. This is directly aimed at the pro-democracy protests which the CCP has been trying to equate with “terrorism”

So, The new National Security legislation is a tool of the CCP to crack down and stifle any dissenting voices.

Through this legislation, Beijing plans to stop mass protests by banning acts of treason, secession and subversion which would effectively signal the end of the “one country, two systems” principle which China had promised to the UK when it took over the reigns of Hong Kong in 1997 and pledged to keep the city semi-autonomous until 2047.

But pro-democracy protesters are not giving in so easily, Hong Kong’s popular activist, Joshua Wong said, “We must stand up and fight, and let Beijing know that we will never surrender. We would describe it as the beginning of the end. We don’t have enough time but we still need to continue the fight.

There is an increasing fear that Hong Kong will lose its independence with this move of the Chinese. US Secretary of State Mike Pompeo said that the new national security legislation will effectively act as a “death knell” for the autonomy of the city. The US has also threatened to Slap China with sanctions over this.

As the CCP cracks down on the protests, Taiwan has promised help for the people of Hong Kong who are continuously subjected to brutality and face an uncertain future. Taiwan President Tsai Ing-Wen took to Facebook to reiterate her support for the Hong Kong protestors.

In her Facebook post, Tsai said that Taiwan will provide the city with “necessary assistance” as she wrote, “In face of the changing situation, the international community has proactively stretched out a helping hand to Hong Kong’s people.” She further added, “Even more proactively perfect and forge ahead with relevant support work, and provide Hong Kong’s people with necessary assistance.” She stressed that bullets and repression is now the CCP’s way to deal with Hong Kong’s desire for freedom and democracy.

Taiwan President Tsai Ing-wen posted on Facebook to show support to people against the so called Hong Kong #NationalSecurityLaw Taiwan has been constantly helping HK civilians in diff means. Thank you President Tsai for standing with us all this time for universal democracy. pic.twitter.com/SQrDLXMz0G

Taiwan is seen by the CCP as a breakaway, dissenting province that will one day be unified with China . But Taiwan has been fighting the CCP and striving for recognition as a separate nation. It had been backing Hong Kong even before the pandemic in last year’s pro-democracy protests. Last year as over 30 protesters arrived in Taiwan, seeking sanctuary, the Taiwanese government sought to provide assistance to the protesters, thereby risking the ire of the Chinese Communist Party. The Hongkongers had escaped to Taiwan fearing prosecution by the CCP. Back then, Tsai had said, “These friends from Hong Kong will be treated in an appropriate way on humanitarian grounds.”

What we see today is Hong Kong and Taiwan unitedly fighting a clear adversary: the Chinese Communist Party.

It is UAE, Egypt, Saudi Arabia vs Turkey now: How the Libya War has divided the Muslim World into ‘Good Muslims’ and ‘Bad Muslims’