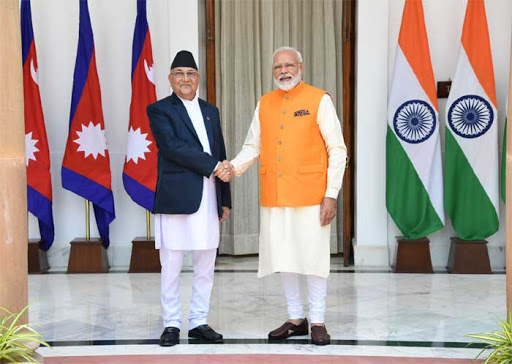 We at TFI have extensively reported how Nepal’s political leadership has been constantly undermining India’s strategic and security interests ever since the inauguration of Dharchula-Lipulekh road link by India. The Communist regime’s invective has been led by Prime Minister KP Sharma Oli himself. While the political leadership in Kathmandu continues to make invidious remarks aimed at New Delhi, the fact remains that this is not a permanent shift in geopolitical dynamics.

Nepal might seem like a friend turned foe, but this power play between India and China is not new. As China tries to encircle India in the Indian Ocean Region, don’t be surprised if regimes in these smaller countries keep oscillating between India and China. This power play is the new normal and it is going to leave an imprint on the smaller neighbours of India in the ongoing era of Sino-India rivalry.

While the ruling Nepal Communist Party has been making headlines for ratcheting irredentism against India, it should not be interpreted as an ally lost. Rather it can be seen as an ally gone rogue, which had also happened in the case of Sri Lanka in 2015 when the then President Mahinda Rajapaksa, shunned by the world including India over human rights violations, had found a friend in China.

Beijing had tricked Mahinda Rajapaksa into an alliance and soon India’s maritime neighbour was reeling under a debt of billions of dollars from China. But in 2015, Mahinda Rajapaksa was voted out of power in a shocking loss to Maithripala Sirisena that marked an end to the island’s pro-China and anti-India approach.

Similarly, ties between India and Maldives had temporarily soured due to growing Chinese influence in the archipelago, but India’s influence had worked when the pro-China Abdulla Yameen regime gave way for an India friendly President, Ibrahim Mohamed Solih.

This is only natural in the ongoing competition between India and China. To be precise, New Delhi and Beijing do not share a symbiotic relationship, and India is more of a rival to China not just on the borders but also in terms of economic prowess.

In this context, China’s goal is to encircle India in the Indian Ocean Region and its vicinity. The Belt and Road Initiative (BRI) project itself is a part of China’s goals to encircle India. By exercising influence in Nepal, Beijing might be able to cut through Himalayas and get hold of a geographically strategic vantage point over India. On the other hand, New Delhi wants to maintain the status quo, and doesn’t want to get checkmated in the area of its own influence.

The rivalry between the two powers influences the political landscape in the smaller neighbours, especially with Beijing looking to overshadow New Delhi. This is why we have witnessed abrupt rise of anti-Indianism in the region three times- Maldives, Sri Lanka and Nepal.

None of the three developments were organic and it was all about China pulling a few strings to evoke anti-India sentiment. But India doesn’t back off either- these countries are old allies and New Delhi does enjoy certain spheres of influence in these countries.

Therefore, China’s attempts in Sri Lanka were thwarted first in 2015 when a seemingly pro-China Mahinda Rajapaksa was replaced by Maithripala Sirisena and again last year when Mahinda’s younger brother Gotabaya Rajapaksa was elected to power, but he established strong ties with India instead of warming up to China.

China-backed Abdulla Yameen in Maldives was, of course, thrown out of power in 2018. But Beijing will not let India have its way as easily in Nepal because- one, China is more desperate today than it was say two years ago, and two, Beijing has already got a bloody nose- once in Maldives and twice in Sri Lanka.

China will throw in a lot of money and a lot of influence to retain the hold it has found in Nepal. And this has already happened as the Chinese Ambassador herself rushed to save the KP Sharma Oli government earlier this month. Had the Oli regime collapsed, India would have had its way in Kathmandu.

This means that while India and China are headed on the collision course, New Delhi will have to pull a few more strings in the Himalayan country and assert just the right amount of influence because China is not going to let Nepal go as easily as Sri Lanka or Maldives.

India and Nepal share centuries-old, cultural ties and ultimately Nepalese will notice how Chinese Communism is threatening their Hindu culture which will create a small window of opportunity to find its way into Nepal. Oli regime is temporary, but Nepal’s economic dependence on, and cultural ties with, India are permanent which might be a deciding factor in how the ongoing powerplay in the landlocked country pans out.