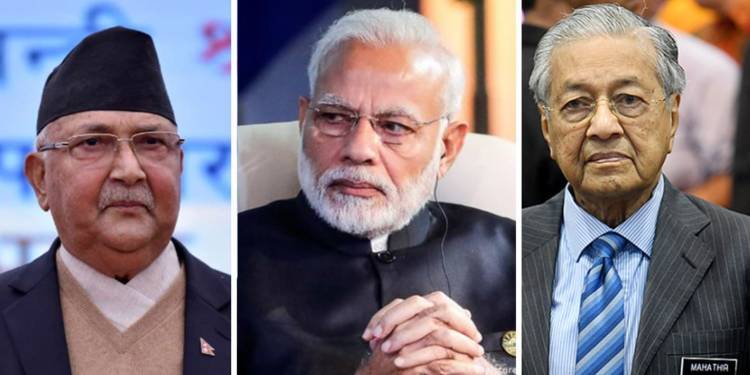 The Nepal government’s communist bravado which saw it taking a decidedly anti-India stance without any provocation has finally been made to alter its stance as not only Nepal Prime Minister Oli’s plan to change the country’s map which includes Indian territories have been put on hold, the Nepal government is also now seeking talks with India as it realises the cost of soured relations with India.

Malaysia has been one of the finest examples of Indian diplomacy as they tamed a radical Islamist Mahathir Mohammad who in his quest for Wahhabism saw him going on regular anti-India rants. Under a new leadership, Malaysia has now shunned its anti-India stance, and India’s decision to use trade as a weapon has worked wonders. Nepal is in for a similar ride.

India and Malaysia always had cordial relations both between the governments and the people but ex-Prime Minister Mahathir Mohammad chose to undo everything that the two countries have achieved together when he went on an anti-India rant at the United Nations General Assembly and things only went downhill from there. Mahathir repeatedly meddled in India’s internal affairs from Kashmir to CAA.

India didn’t take Mahathir’s rants lying down as it decided to leverage its economic might by restricting Palm oil imports from Malaysia, which devastated the South Asian nation’s economy.

India has severely punished Malaysia for Mahathir’s sins as the former has imported just 10,806 tons of palm oil in March which is the lowest monthly total since 2000. It is expected that the number is likely to fall below 10,000 tons in the coming months which won’t bode well for the world’s second-largest producer of palm oil.

Since Mahathir’s removal, the Muhyiddin government had made it a mission to placate India and improve the bilateral relations. In a significant move, earlier this month, Malaysia has now signed a record rice deal with India as the former is all set to import a whopping 100,000 tonnes of rice from India in the span of the next two months. This purchase by Malaysia is already double the average yearly volume of rice the country has imported from India in the past five years. This is a significant move as Malaysia on average imported around 53,000 tonnes per year for the last five years.

India is the world’s biggest exporter of rice and this move will help in reducing the country’s rice stockpiles. BV Krishna Rao, president of India’s Rice Exporters Association said, “After a long time, Malaysia is making substantial purchases from India.” Rao believes that India’s rice exports to Malaysia can rise as much as 200,000 tonnes this year.

Earlier in March, India’s exports of sugar to Malaysia nearly tripled over the 2019 figure despite it being less than 3 months into 2020. This is a significant development as India is a sugar surplus country and is the world’s biggest producer of sugar and this move will help India in reducing its stockpiles. “This year Malaysia was aggressively buying Indian raw sugar which was a pleasant surprise,” said the president of the All India Sugar Trade Association. In the first three months of 2020, Malaysia has imported 324,405 tonnes of sugar from India compared to around 110,000 tonnes in 2019. It is estimated that Malaysia’s raw sugar purchases this year will surpass 400,000 tonnes.

The Malaysian government is even asking its refiners to give preference to India when it comes to the purchase of raw sugar.

There is now a visible thaw in the bilateral relations as India has now resumed palm oil imports from Malaysia after the latter slashed its export duty on the commodity to zero for the month of June. It is important to note that the export duty on the commodity was 4.5% in May. Now, after a four-month gap India has finally started palm oil imports from Malaysia as leading Indian importers placed orders of up to 200,000 tonnes of crude palm oil from Malaysia which will be delivered in June and July.

For Nepal, Oli’s bravado was short-lived as he has realised the perils of siding with China and giving the cold shoulder to India. Oli has realised his folly and has now asked the Modi government to allow Nepalese traders to export palm oil and tea to India. Recently, the Modi government cancelled the permission to import over three lakh tonnes of refined palm oil from Nepal and Bangladesh as it found that the two countries were misusing the South Asian Free Trade Agreement. According to the agreement, free trade is allowed only in the case where there is the production of the commodity in the economy of origin. However, Bangladesh and Nepal don’t produce a single drop of palm oil and import entirely from Malaysia. It is important to note that this move happened before Oli’s decision to amend Nepal’s map and take a decidedly anti-India stance.

Nepal has taken a huge hit as about 2.93 lakh tonnes of palm oil was slated to be imported from the country while the rest 12,000 tonnes from Bangladesh which is now cancelled. This has resulted in Malaysia’s palm oil exports dwindling not just in India but also in Bangladesh and Nepal.

Sensing the impending blow to Nepal’s economy, the Nepalese government has dispatched two letters to the Indian government seeking a permit for the Nepalese traders to export tea and refined palm oil in the Indian market. The fact that India is seeking ways to restrict the flow of Nepal tea as due to the abundance of Nepal tea which is often sold as Darjeeling tea despite patent protection has made the Nepal government uneasy as in 2019, Nepal has exported tea worth Rs 63 crore to India.

Nepal is now seeking talks with India while the latter is stressing on rebuilding trust as a precondition of any bilateral dialogue. Trade will improve essentially when the Communist government of Nepal cuts down on its rhetoric against India.