Is China planning to invade Taiwan? There are some very clear signs of it

The rise of Tsai Ing-wen has rattled China 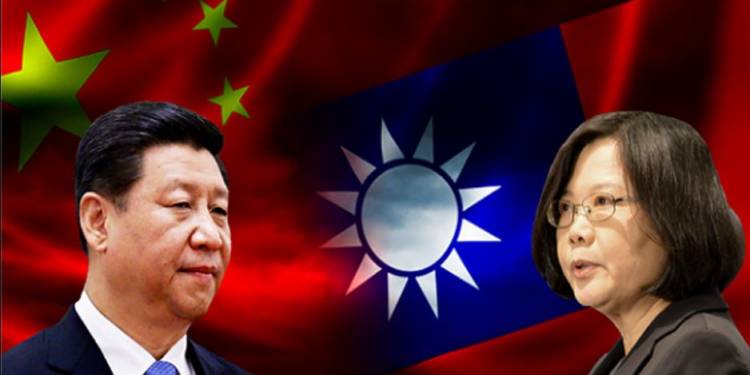 Ever since the rebels led by the tyrant Mao Zedong overthrew the People’s Republic of China in 1949, it has long been a dream of the Communist Party of China to take back the island country of Taiwan, where the surviving members of the Kuomintang Party fled to Taiwan and established a government in the island. The rise of Tsai Ing-wen has greatly scuppered China’s plans of forcefully reunifying Taiwan as the latter is increasingly slipping away from the hands of the CCP. If recent developments are anything to go by, the Chinese government is planning to invade Taiwan.

China has been aggressively expanding in the South China Sea at the cost of its neighbours as the CCP wrongly claims almost the entire seas despite an international tribunal judgement against it. In a recent development, China’s People’s Liberation Army is now readying its aircraft carriers to take part in combat readiness exercises which includes landing drills in the South China Sea.

Japanese media has also reported that the PLA is also planning a beach-landing exercise in August near the Hainan Province. The exercise will see the PLA simulating the takeover of geo-strategically important Pratas Islands situated in the north of South China Sea and controlled by Taiwan.

“An aircraft carrier strike group will pass through the Pratas Islands on its way to the exercise site to the southeast of Taiwan in the Philippine Sea,” said a military insider.

China has sought to negate the geo-strategic importance of the Pratas Island by build eight artificial islands with 3,000 metre airstrips on its man-made islands. The fact that there are only 200 Taiwanese troops on the Pratas Islands further increases the risk of a hostile takeover by China.

Ever since Xi Jinping took over the reigns of China, he has fastened the efforts of bringing back Taiwan to its fold, by force if necessary. However, Tsai Ing-wen is standing like a rock and scuppering Jinping’s plans and the pandemic, will only increase the statute of Taiwan. In 2015, just before Tsai was elected, as opinion polls showed a decisive lead for Tsai and her party, the CCP tried to threaten Taiwan by staging mock invasion of its Presidential Palace.

In China’s Zhurihe combat training base, the PLA has created a structure that is eerily similar to the streets of Taiwan’s capital city, Taipei. The CCP released a video in early 2015, where the Chinese soldiers are shown conducting as assault on a building which is strikingly similar to Taiwan’s Presidential Office.

Earlier this year, one of China’s top military generals threatened Taiwan with military action. “If the possibility for peaceful reunification is lost, the people’s armed forces will, with the whole nation, including the people of Taiwan, take all necessary steps to resolutely smash any separatist plots or action,” said Li Zuoheng who is a member of China’s Central Military Commission.

Li Zhanshu, the CCP’s third most powerful leader and the head of Chinese Parliament said, “As long as there is a slightest chance of a peaceful resolution, we will put in hundred times the efforts.” By the end of his speech, Zhanshu claimed that non-peaceful means are meant as a last resort, clearly indicating that the CCP will use military force if needed to reunify Taiwan.

Recently, some retired Chinese military leaders have suggested the USA is not in a position to defend Taiwan at present as the US Military battles the Wuhan coronavirus and hence, the time is ripe to bring back Taiwan.

China is witnessing a rising nationalist sentiment as there are growing calls to bring back Taiwan to its fold, especially considering the fact that the US Military has been crippled by the Wuhan coronavirus as its aircraft carriers are stuck in the Pacific region with the warships unable to move as the virus is spreading on the warships at an alarming rate.

It may be reminded that the USA recently passed the TAIPEI Act much to the chagrin of China as the USA attempts to scale up its engagement with Taiwan and help the latter gain diplomatic recognition, which it so desperately needs. Importantly, the TAIPEI Act also seeks to safeguard Taiwan against any Chinese aggression. The law mandates that the US President is required to provide weapons to Taiwan that mitigate the looming Chinese military threat.

The possibility of Taiwan getting international recognition is the worst nightmare for the CCP as it will make it impossible for the dragon to take back Taiwan, which has prompted the CCP to move towards taking back Taiwan at a time when the world is busy fighting the China made pandemic.