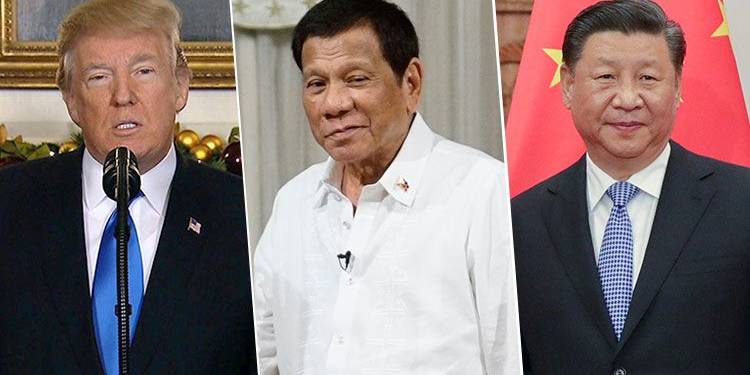 Owing to the Coronavirus Pandemic, and its hawkish behaviour in the South China Sea, East China Sea and land borders with India, Beijing has been losing friends around the world over the recent past. The latest ally that the Dragon seems to have lost is the Philippines President Rodrigo Duterte.

Duterte has been blatantly pro-China in his approach, ever since he took over in 2016 and recently he had announced that the Philippines would pull out of the visiting forces agreement with the United States, a two-decades-old military pact between the two countries. But now the Philippines has suspended plans to pull out of the military pact owing to ‘political developments in the region.’

The ‘political developments’ are China’s hawkish behaviour in the South China Sea, as is reflected from the Philippine Ambassador to the US Jose Manuel Romualdez’s statement.

He said, “Because of security issues … in that part of the world (South China Sea), both our governments have seen it would be prudent for us to simply suspend any implementation of the termination.”

President Duterte had warned in January that he would repeal the military pact that allows US troops in the country, and it was supposed to come to an end in August.

This was seen as a decisive shift towards China, and Washington was faced with the prospect of losing a key ally in the strategically crucial region. Duterte’s Presidency has been marked by a ‘pivot’ in the Philippines towards Beijing.

In fact, ahead of the 2016 Presidential polls in the Philippines, Duterte had said, “What I need from China is help to develop my country.”

This was too big an opportunity for Beijing to miss and by the end of 2016, Duterte secured 24 billion dollars in Chinese-pledged investments. He has been trying to sell his ‘pivot’ towards Beijing on the basis of developmental support from China.

In October 2016, the Philippine leader, Duterte, was on a State visit to China, where he announced that he had “separated” from the US to be “dependent” on China “for a long time”.

China has built artificial islands in the Philippines’ Exclusive Economic Zone, claiming “historical maritime rights” under its nine-dash line claim whereby China encircles 90 per cent of the disputed waterways running around 2,000 kilometres away from mainland China.

But it was ruled by an International Court that Chinese claims have no validity in international maritime law. China refused to participate in the arbitration case and now refuses to accept its findings. Duterte was playing into the hands of Beijing by allowing it to sidestep the arbitration award.

When the Coronavirus Pandemic struck the world, the Philippines was the first country after China to record a Coronavirus death. It led to an anti-China wave in the country, which has traditionally tilted towards the US.

The Philippines government was keen to allow Chinese tourists, but ultimately caved into extensive political pressure within the country and announced a blanket ban on February 3.

Duterte tried to support Beijing and said, “China has been kind to us, we can only also show the same favour to them. Stop this xenophobia thing.”

He also dismissed suggestions of deporting Chinese nationals as “xenophobia”. And again tried to garner support for China by suggesting that China might be the first one to find a COVID vaccine and said, “Just pray that the vaccine — ang target nila (their target) is September. September I think China will be able to distribute if I’m not mistaken. And the other countries are catching up. Every — everybody is at it so they are really trying their very best.”

What went wrong for China though is its bellicose behaviour in the South China Sea. Many, including the Communist Party of China (CCP) may have miscalculated Duterte’s perceived tilt towards Beijing.

The fact remains that his ‘pivot’ towards China was more of a shift away from the US, rather than a tilt towards Beijing. Within the Philippines, this was attributed to Duterte’s anti-neocolonial ideology.

It is recognised within the Philippines that geopolitical dynamics haven’t changed- China still maintains artificial islands in the Philippines’ EEZ backed by asymmetric military power in the Dragon’s favour.

For Duterte, it became increasingly difficult to sell the ‘development’ narrative by aligning with China. Chinese investments have been slow to materialise in the Philippines and in such circumstances, China’s bullying in the South China Sea proved to be the last straw.

China has thus lost another ally as the Philippines is leaving the pro-China bloc and moving towards Washington.