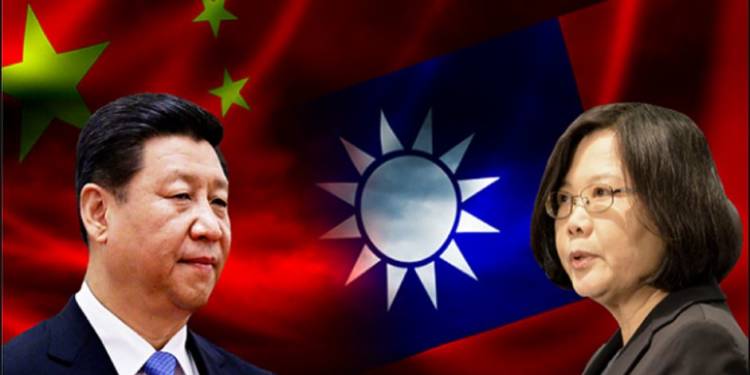 After the chip wars began between China and Taiwan, a rattled Beijing is making unnecessary fluttering and splashy waves to scare off Taiwan. However, the tiny island nation is giving the side–eye to China and not backing down one bit. According to Reuters, Taiwan’s air force on Tuesday warned off several Chinese fighter jets that briefly entered Taiwan’s air defence identification zone to its southwest.

The defence ministry stated that Chinese Su-30 fighters were given warnings to leave the airspace and the Taiwanese air force jets “drove away” the intruders.

In the month of April too, the Taiwanese Coast Guard had chased 40 illegal dredging vessels from an area at the northern end of the South China Sea.

Illegal fishing and sand dredging by ships from China has been a recurring problem leading to confrontation in the Taiwan Strait.

Beijing has been illegally dredging large swathes of ocean bed for sand in the region, thereby disturbing the ecological balance. According to news reports, Chinese ships are dredging more than 100,000 tonnes a day.

The Xi Jinping regime is deeply suspicious of Taiwanese President Tsai Ing-wen, whom it accuses of being a separatist bent on declaring formal independence. In the last few months, China has stepped up its military activities near Taiwan, using Coronavirus pandemic as a shield.

China considers Taiwan as a part of its territory under its ‘One China’ policy but Taiwan considers itself as an independent sovereign nation. The Taiwanese President Tsai Ing-wen has repeatedly irked the Chinese so much that they are looking to strong arm the nation to cede into Chinese territory.

Tsai Ing-wen has wooed the world with her mask diplomacy which brought praise from all quarters including the European Union which had tweeted out to acknowledge Taiwan for its contribution.

The European Union thanks Taiwan for its donation of 5.6 million masks to help fight the #coronavirus. We really appreciate this gesture of solidarity. This global virus outbreak requires international solidarity & cooperation. Acts like this show that we are #StrongerTogether.

Taiwanese President Tsai Ing-wen has been making political statements every now and then to use the escalating tensions between US-China to challenge the Chinese hegemony in the state. All in all, Taiwan is mounting a spirited fight against the egotistical Dragon.

These developments have really irked China, Reported earlier by TFI, Li Zuocheng, chief of the Joint Staff Department and member of the Central Military Commission of China had stated that China will attack Taiwan if there is no other way of stopping it from becoming independent. Li is one of the most senior generals of China and such a statement coming out from his side means that Taiwan is poking around where it hurts the most.

To compound China’s misery, Taiwan has upped the ante in the Chip-wars. According to various news reports Taiwan’s cabinet is planning to allocate more than NT$10 billion ($335 million) to entice foreign chipmakers to set up R&D facilities within the country, locally.

The Taiwanese incursion in the semiconductor (chip) field is to irk China and to also attract capital and new talent to maintain the island’s industry lead.

Taiwan Semiconductor Manufacturing Company (TSMC), a Taiwanese company that manufactures semiconductors based on secretive American design had also announced that the company would not be taking any new order from Chinese tech giant–Huawei.

With Taiwan pushing the Chinese jets off its territory and giving it a stern warning in the backdrop of recent developments, one needs to stand up and applaud the tiny island nation of standing up to China and going toe-to-toe with it. Countries around can take a lesson from Taiwan’s resilient fight against the Chinese.