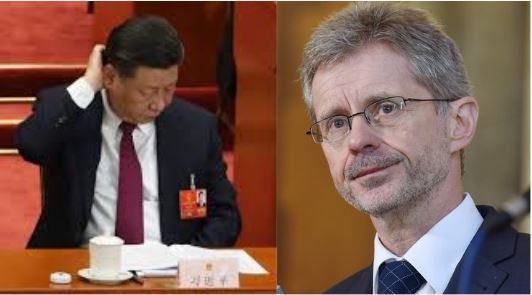 Miloš Vystrčil, the President of the Czech Senate is all set to visit Taiwan in August. Miloš Vystrčil belongs to the Civic Democratic Party (ODS) of the Czech Republic, which is the second most powerful party in the nation’s Chamber of Deputies, or lower house of Parliament. The Speaker’s office announced that the visit is tentatively set to commence on August 30, and that Miloš would be accompanied by a business delegation to Taiwan.

The announcement comes in the backdrop of China issuing stern warnings to the Czech Republic since January this year over a range of issues. According to Vystrčil, the decision of his to undertake a visit to Taiwan was driven by the fact that China was pressuring his country repeatedly, apart from issuing a warning to lawmakers  against congratulating Taiwan’s President Tsai Ing-wen on her re-election. “The People’s Republic of China believes it has a right to tell us what to do,” Vystrčil said.

Miloš Vystrčil is an ideological opponent of both the Czezh President, Miloš Zeman, as well as the country’s Prime Minister, Andrej Babiš. This is the precise reason why Vystrčil is being warned against visiting Taiwan by his own government, the President and Prime Minister of which are both seemingly pro-Beijing.

Miloš Vystrčil, however, is in no mood to budge. It must be mentioned here that the current Senate Speaker’s determination to enhance ties with Taipei are driven by the fact that his predecessor and colleague, late Jaroslav Kubera could not fulfil his commitment to visit Taiwan, due to his shady death just prior to the visit.

Kubera, the previous Speaker of Czech Senate was due to visit Taiwan in February this year, however, he died in late January after a visit to the Chinese Embassy in Prague. Jaroslav Kubera, three days prior to his sudden death, had visited the Chinese Embassy for dinner, during which the Chinese ambassador requested for a “private conversation” with Kubera. Kubera emerged angry and frustrated after the private meeting, and asked his wife to not eat anything at the embassy.

While the wife survived what many call a conspiracy, Kubera did not live to visit Taiwan. Kubera’s wife alleged that days prior to his untimely demise, the man had become astonishingly silent. Post his death, the family recovered two letters addressed to Kubera, one from the President of Czech Republic, and the other from the Chinese Embassy, both of which warned the Speaker against undertaking a visit to Taiwan.

Jaroslav Kubera, one of the most influential officials in the #CzechRepublic, suddenly died in late January after a visit to the Chinese embassy. His widow blames his death on pressure from Czech and Chinese authorities who threatened him not to visit #Taiwan. @ChinaInFocusNTD pic.twitter.com/fYQkPaJ9eN

The January 10 letter, which was sent by China’s embassy in Prague to the Czech president’s office, suggested that Czech companies operating in mainland China, such as Volkswagen, subsidiary Skoda Auto or lender Home Credit Group, would suffer if Senate speaker Jaroslav Kubera visited the self-ruled island, Reuters reported. Kubera died on Januray 20.

The pro-China President and Prime Minister of Czech Republic are increasingly being isolated in their own country, as Miloš Vystrčil now emerges as the new anti-China strongman, at a time when people are increasingly siding against the CCP and in support of Taiwan’s sovereignty. As a matter of fact, even the mayor of Prague, Zdenek Hrib, had hit out at China for being an “unreliable partner” in January, after having cancelled a sister city agreement with Beijing in October last year, and subsequently signing the same with Taipei, Taiwan’s capital in January.

Now, with Miloš Vystrčil all set to undertake a visit to Taiwan along with a business delegation, where he will also reportedly be meeting the Taiwanese leadership, China is bound to be frustrated and take radical steps befitting a headless dragon. That Vystrčil, despite knowing that such a visit could serve as a potential threat to his life, has decided to continue with the same, speaks volumes about the anti-China sentiment which is running high across the world, and even Europe. His visit would be a befitting tribute to the memory of Jaroslav Kubera, who died in mysterious circumstances prior to his Taiwan visit.