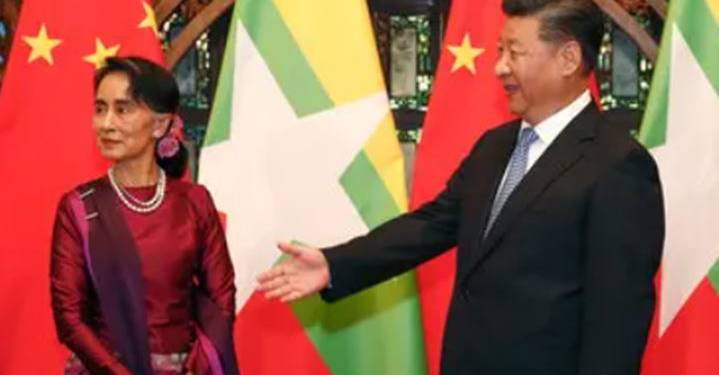 One of the Chinese President Xi Jinping’s topmost priorities has been the Belt and Road Initiative (BRI)- a trillion-dollar, intercontinental-infrastructure development project, whereby China wants to expand its influence in its vicinity and other parts of the world. This is not just an economic, infrastructure development initiative for China, but also a crucial foreign policy tool for the Chinese Communist Party. But off late, it has met opposition from several countries, and China’s shortcut to become a Superpower through the big-bang infrastructure project is facing bottlenecks across several countries. The latest country where the BRI has run into trouble is Myanmar.

The Irrawaddy, an independent online portal that covers Burmese politics has revealed that Myanmar is making a concerted effort not to go ahead with Belt and Road Initiative (BRI) projects relentlessly.

Recently, Myanmar announced a seven-point economic relief plan, dubbed CERP (COVID-19 Economic Relief Plan) which was aimed at mitigating the damage caused by the COVID-19 Pandemic to the Burmese economy. One of the objectives of the seven-point relief plan was “easing the impacts on labourers and workers”. To achieve this, the Myanmar government plans to work on implementing “Labour-intensive Community Infrastructure projects.”

It was being speculated that this could help China’s Belt and Road Initiative (BRI) megaprojects in Myanmar move ahead without adequate assessment in terms of conflicts possibility, unsustainable debt involved in the projects and their commercial viability, or the lack of it. There have also been apprehensions that this could also translate the vision of China-Myanmar Economic Corridor (CMEC) into reality.

But The Irrawaddy report clarifies that such apprehensions are unfounded. According to the website, a senior Burmese official, familiar with the development, said that so far, the CERP infrastructure projects do not include the Chinese megaprojects.

He also made it clear that there are no fears of China’s BRI megaprojects in the country being pushed through recklessly, without any scrutiny.

The official has been quoted as saying, “When it comes to choosing strategic infrastructure projects, they must already have been proposed but facing delays; they must be implemented by a reputable company with international experience, and the projects have to be commercially viable—not a burden on the country.” He added, “According to the criteria, BRI projects are not among those slated to be chosen.”

There are three major Chinese projects in Myanmar- New Yangon City, the Kyaukphyu Deep-Sea Port and Industrial Zone, and the China-Myanmar Border Economic Cooperation Zones. Interestingly, the official has suggested that the BRI projects do not meet the stated criteria.

In contrast to the fears, it has become clear that the Belt and Road Initiative (BRI) is probably being regarded as unfeasible by the Burmese government. The Myanmar government has grown aware of the commercial unfeasibility of BRI projects, and how the Xi Jinping regime’s “debt-trap diplomacy” has taken grip of other countries in the region such as Sri Lanka, Pakistan and Nepal.

Daw Khin Khin Kyaw Kyee, head of the China desk at the Institute of Strategy and Policy (ISP) told The Irrawaddy that key BRI projects like the Kyaukphyu SEZ are commercially unviable. This is a huge jolt for China as it wants to develop this SEZ so that the landlocked Yunnan Province can find access to the Indian Ocean.

Daw Khin Khin Kyaw Kyee said, “It would take at least 10 to 15 years to become commercially viable. But it is still not certain. Because the result will also depend on geopolitical factors, as the project’s implementation is being planned from a strategic perspective [of giving China access to the Indian Ocean].”

Similarly, the CMEC hasn’t come into being, even two years after it was envisaged. Daw Khin Khin Kyaw Kee said, “The government is cautious when it comes to BRI projects. The preliminary agreement for the CMEC was reached in 2017. It has been more than two years, but implementation of the backbone projects is still being negotiated.”

Meanwhile, the Myanmar government has added a new condition of being allowed to seek financing for projects from international financial institutions like the World Bank and Asian Development Bank to avoid incurring unsustainable debt obligations to China. This defeats the very purpose and essence of the BRI wherein China tries to usurp the territorial sovereignty of other countries through heavy debt obligations.

Myanmar is strategically located, and growing Indo-Burmese cooperation also threatens Beijing’s interests in the country. As such it seems that Beijing’s BRI is falling apart and now it has hit a major roadblock in yet another country.