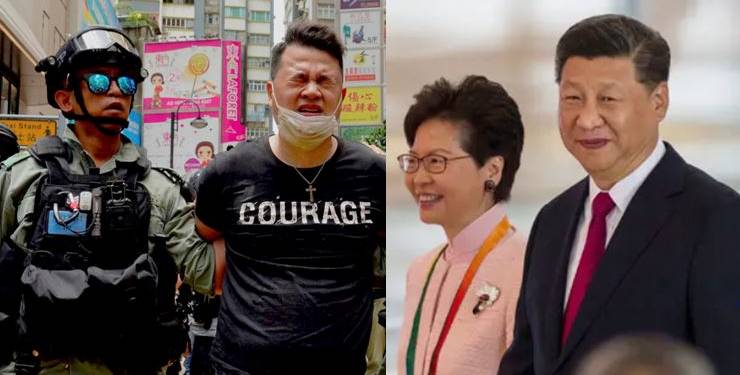 China has drawn first blood in its ongoing streak of expansionism. The country has brutally enforced the Law of the People’s Republic of China on Safeguarding National Security in the Hong Kong Special Administrative Region, or the controversial National Security Law that it is being called worldwide.

Hong Kong is now officially no different from mainland China as the CCP has bypassed the Hong Kong legislature to criminalise acts of secession, subversion of state power, terrorist activities, and collusion with foreign or external forces to endanger national security.” Essentially, all political activities which the CCP does not like, are now banned in Hong Kong.

Beijing has been not only ruthless but also sadistic in its approach towards Hong Kong. It chose to enforce the National Security Law on the eve of the 23rd handover anniversary, that is, July 1 when the British had handed over the colony City-State to the People’s Republic of China in 1997.

Till now, Hong Kong was a Special Autonomous Region with people of the City-State enjoying liberties unlike mainland China. But not any longer. Zhang Xiaoming, Executive Deputy Director of Beijing’s Hong Kong and Macau Affairs Office said, “The law is a birthday gift to (Hong Kong) and will show its precious value in the future.”

Beijing’s method of presenting the birthday gift is rather grotesque though. For starters, it brought in a CCP hardliner, Zheng Yanxiong as the head of a newly formed all-powerful agency in Hong Kong that will oversee the implementation of the National Security Law.

He is infamous for cracking down on the Wukan village protests in 2011. The villagers were protesting over compensation for land grabbed by the CCP. They had also aired their grievances to foreign media. But the 56-year old official was heard making some nasty comments.

He looked down upon the villagers and insinuated that they were “colluding with foreign media to create trouble”. Zhang had also said that “pigs will fly before the foreign press can be trusted,” apart from calling foreign media “rotten”. Most recently, he served as the Secretary-General of the Communist Party committee of the Guangdong province.

Zhang has never really held a post outside Guangdong, but now Xi Jinping is moving the despotic official so that he can trample upon the liberties of the citizens of Hong Kong.

He has started already and how- hundreds of arrests, some of them under the new National Security Law, and the use of lethal methods including water cannons, pellets, pepper sprays and tear gas.

China is stifling dissent in Hong Kong. As a part of its ‘birthday gift’ to Hong Kong, Quick to implement the new law, China arrested over 300 people as thousands marched into streets chanting “resist till the end” and “Hong Kong independence”.

By virtue of the National Security Law, mainland security agencies can now enter Hong Kong and protesters will be extradited to mainland China where they will be tried by the Kangaroo courts of the Communist country.

China doesn’t want Hong Kong to speak and this why it says it will “strictly enforce” the new security laws. The Hong Kong Police has also added a new tool to its arsenal- a purple flag warning for protesters.

The warning reads, “This is a police warning. You are displaying flags or banners/ chanting slogans/ or conducting yourselves with an intent such as succession or subversion, which may constitute offences under the “HKSAR National Security Law”. You may be arrested and prosecuted.”

For the record, “arrested and prosecuted” in China means enforced disappearances and mysterious murders.

Hong Kong Chief Executive, Carrie Lam, has basically got her own city ravaged by claiming that she stands for Hong Kongers and then allowing the Chinese mainlanders to ransack the city.

Yet both the Chinese and Hong Kong governments continue to claim that the new security laws being enforced are going to affect an “extremely small minority”. Beijing claims that the law is supposed to protect the “legitimate” rights of Hong Kongers. But the law imposes archaic measures beyond imagination.

One can be declared a “terrorist” for even marching on the road, as the law defines terrorism as hindering or damaging public transport. The first man to become a victim of the National Security Law is a 23-year old man Tong Ying-kit.

China says he was carrying a “Liberate Hong Kong” while he drove a motorbike into police at a protest. He has been charged with inciting separatism and terrorism.

Life imprisonments can be handed for “acts of secession, subversion of state power, terrorist activities, and collusion with foreign or external forces to endanger national security.” All of which are deliberately defined in vague terms.

People have already been arrested for outrageous reasons- a man holding a black independence flag and a woman with a sign reading, “Hong Kong Independence” were detained by the police.

China’s actions in Hong Kong are a threat to the world. Rajiv Kumar Chander, India’s Ambassador and Permanent Representative to the UN said, “Given the large Indian community that makes the Hong Kong Special Administrative Region of China its home, India has been keeping a close watch on the recent developments. We have heard several statements expressing concerns on these developments. We hope the relevant parties will take into account these views and address them properly, seriously and objectively.”

The concerns are genuine. The repercussions of the National Security Law go beyond Hong Kong. You land up in Hong Kong and you could be arrested under the draconian law, and you will never find out what your fault is. China has thrown the ideals of due process and equity out of the window.

The US, the UK and Taiwan have taken measures to let Hong Kongers escape China and take refuge in these countries, as the democratic world plans to rescue the city which has been sieged by China.

But China won’t let Hong Kongers escape either. Consider this- a man was about to depart for Hong Kong from London. But a Chinese Inspector received an anonymous call claiming that this man had stabbed a police officer. Within 12 minutes, the man was taken into custody. And who are we to insinuate that the Chinese authorities made up a story to restrain the accused man from flying.

Hong Kong is a major victim of Chinese expansionism, and a message to the world- brace up for a belligerent Beijing.