Macau also has the “One Country, Two Systems” in place 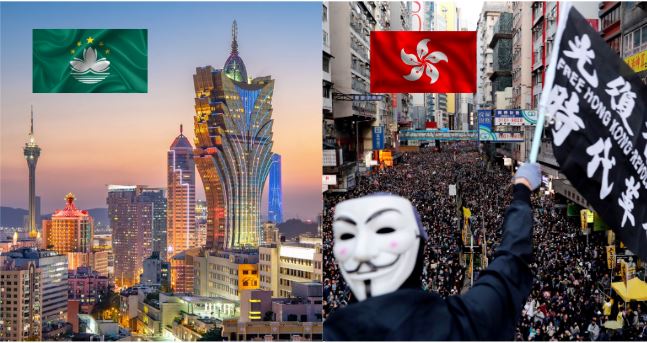 The world is perturbed by China’s unilateral decision to curtail Hong Kong’s autonomy as the controversial National Security Law all but establishes the brutal regime of the Chinese Communist Party in the city of Hong Kong. The US is thinking of placing sanctions against China while the United Kingdom has offered visas to Hongkongers who are looking to escape the city as China has come under increasing international pressure over its actions in Hong Kong. Just 65 km away from Hong Kong, lies the tiny Macau, which was earlier besieged by the Chinese Communist Party but hardly anyone noticed as at that time, the world was living under the bubble of ‘Peaceful Rise of China’.

Macau, just like Hong Kong, also has the “One Country, Two Systems” in place and is one of the most prosperous regions in the world. While Hong Kong was an erstwhile British territory which was handed over to China in 1997, Macau was a Portuguese territory which was handed back to China in 1999 under the “One Country, Two Systems”. This principle grants autonomy to Hong Kong and Macau.

Just like Hong Kong, the people of Macau don’t elect its chief executive. The Chief Executive is elected by a Beijing backed 400 member panel who then acts as a loyal lapdog of the CCP. Macau which measures just 31 square kilometres and is home to little over 600,000 people records the third highest GDP per capita in the world.

Hong Kongers vociferously protested against the controversial national security legislation as previous attempts to introduce the legislation in 2003 was met with protests and was subsequently withdrawn. Through this legislation, Beijing plans to stop mass protests by banning acts of treason, secession and subversion which would effectively signal the end of the “one country, two systems” principle which China had promised to the UK when it took over the reigns of Hong Kong in 1997 and pledged to keep the city semi-autonomous until 2047.

Macau which willingly introduced the bill in 2009, has a far less stringent national security bill as compared to Hong Kong perhaps because Macau has willingly subjected to the throngs of the CCP, unlike Hong Kong, which has constantly challenged the rule of the CCP.

The global financial hub, Hong Kong has a population of 7 million whose futures have now been grown into a state of quandary after national security legislation. Hong Kong will now have a dedicated mainland agency to ensure the bill is enforced and oversee the region’s national security in tandem with the three CCP officials appointed by Xi Jinping.

However, Macau doesn’t have any dedicated CCP official or a mainland agency to oversee its national security with Macau’s leader chairing a national security commission comprising local officials since the last couple of years.

Unlike in Macau, the CCP’s national security law for Hong Kong, allows the central government to exercise jurisdiction if cases involve “complicated situations” of meddling by foreign forces; or when national security is under “serious and realistic threats” – which effectively means that the dissenters of the regime can be extradited to the mainland.

While in Macau non-violent acts do not constitute secession, in Hong Kong’s version of the bill, even acts like raising flags is considered promoting secession as under Article 20 of the law, secession covers acts to separate from China “whether by force or threat of force”. Whereas, in Macau if one is charged with secession, evidence must be presented that individual indulged in violence or “grave illegal acts” like crimes against life or crimes involving the use of nuclear energy and firearms.

Macau’s Chief Executive Edmund Ho Hau-wah in the past has stated that peaceful demonstrations or writing articles critical of the Central government won’t warrant punishment under the national security law. However, that doesn’t seem to be the case in Hong Kong as even before the law journalists from international media houses were harassed and interrogated after they wrote pieces critical of the CCP.

In Hong Kong, in grave cases of offences like terrorism, secession, subversion and collusion with foreign and external forces would amount to life imprisonment whereas in Macau, the same offences carry a sentence carry a sentence of up to 25 years.

Macau isn’t a worry for China as the region not only has willingly submitted itself to the CCP in return for economic prosperity as in 2018, the Macau government handed out approximately $1,246 to its permanent residents as a part of its wealth sharing programme, but is also inundated with people from the mainland. Almost half of Macau’s present day residents are immigrants from the mainland, hence the pro-China tilt and an absence of any dissent whatsoever.

One of the other reasons behind the CCP’s takeover of Hong Kong is the pearl river delta megacity. Now renamed as the “Greater Bay Area” (GBA), the CCP envisions the area will emerge as a rival to urban areas such as New York, San Francisco, and Tokyo.

The GBA is one the verge of completion and aims to integrate Hong Kong, Shenzhen and Guangzhou. The three cities have a combined populations of 71 million and GDP of a whopping $1.5 trillion.

Since the last 10 years, various infrastructure projects have been completed in the cluster as the CCP aims to make Hong Kong and Macau into a seamless zone. Macau was never a problem, but Hong Kong was a constant thorn. The rapid steps taken to strip Hong Kong from its autonomy can be due to the Greater Bay Area.

While no one batted an eye when Macau fell, the world is waking up to Hong Kong’s imminent fall. Only time will tell whether the world will allow China to go scot-free.

Kra Canal: China is creating another naval route to escape a blockade by India and only Thailand can stop it