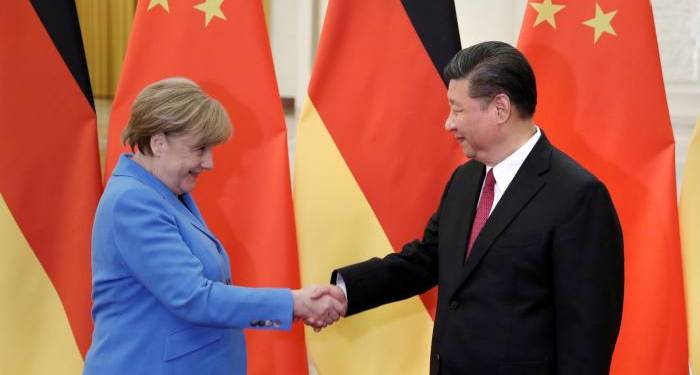 The European Union (EU) has been failing to stand up to Chinese misadventures and driving the intergovernmental organisation’s diabolically pro-China policy is the German Chancellor Angela Merkel.

The de facto head of the EU, Merkel has a strong personal dislike for the US President Donald Trump. She doesn’t want a Trump-led American world order and therefore advocates strong trading ties between Berlin and Beijing. Consequently, she is forcing the entire EU to support China even if it means going against the global backlash on China and letting Beijing play into divisions within the EU.

Germany’s reluctance to take on China became clear during a recent press conference involving German Foreign Ministry’s Deputy Spokesperson Rainer Breul. A controversy erupted after it was found that the German Foreign Ministry website had replaced Taiwan’s official flag with a white flag. Naturally, a reporter asked Breul if this signified a surrender to China.

The Foreign Ministry Deputy Spokesperson could only manage an awkward reply and said, “it isn’t a current change.” The reporter insisted on enquiring further. He asked, “whether currently or not, is it missing? Why did you remove it?” Breul then suggested that Berlin abides by Beijing’s ‘One China Policy’.

He said, “You know Taiwan’s special status, you know our position, our ‘one China policy,’ we have no diplomatic relations with Taiwan, and Taiwan is not a country we recognize, so this is not surprising. When we introduce regions of the world, we distinguish them from countries with diplomatic ties.”

Breul was only trying to sidestep the real issue here with a flimsy excuse. The reporter pointed out that the Palestinian flag could still be found on the German website. Even Palestine is not a recognised country, and therefore it doesn’t really make any sense for Germany to wave a white flag only in case of Taiwan.

Germany is flowing against the tide of popular opinion against China. In fact, Berlin seems to be the biggest obstacle in the path of a strong and coherent EU policy on China. Berlin has not spoken up in harsh terms even on critical human rights abuse issues like imposition of the brutal National Security Law in Hong Kong and Uighur Muslim concentration camps in China occupied Xinjiang.

Angela Merkel herself values Berlin’s trade ties with Beijing. This is a part of her strategy to undermine the Washington-led rules-based world order. She is giving greater space to China in order to undermine the United States.

Over the past 15 years, Merkel has visited China 12 times, bringing Berlin and Beijing unprecedently closer. As criticism of China grew over a host of reasons this year, Germany preferred to stay silent. Germany has taken over EU’s six-months rotating presidency since July 1 and its reluctance to take on Beijing has also affected the entire EU policy on China.

China is Germany’s biggest trade partner with the trade volume hitting a new high of 233 billion US dollars in 2019. Merkel has always been careful not to offend China.

Within Germany, there is opposition towards giving China greater space only because of trade ties. German Social Democrat (SPD) and former President of the European Parliament Martin Schulz told DW that a European appeal to China “must be linked to clear economic messages.”

Schulz added, “Access to the market for Chinese goods could be blocked if [China] will not respect international responsibilities and duties [it] subscribed to.”

Christian Lindner, party leader of the Free Democrats (FDP) also argued that business and democracy should not be pitted against each other. He added, “We cannot let our values be bought.”

But the Merkel administration is not giving in to such criticism. The Economy and Energy Minister Peter Altmaier, in fact, went to great lengths in defending Germany’s close trade ties with Beijing. He said, “It has always been the policy of the Western international community, including the EU, that international trade relations cannot be based solely on how democratic a country is.”

Merkel administration is clear in its approach. It feels that illegal organ transplants, secret Chinese jails and a brutal security law that takes away human rights is not enough of a provocation to speak up against China.

Meanwhile, Beijing is literally celebrating how it has been able to defeat Trump in the European Union. In an editorial titled, “US fails to rope in others against China”, Chinese Foreign Ministry overhang, Global Times quotes the obnoxiously pro-China remarks made by Altamier.

The EU has prospered for decades as the US remained a net security provider for the region during the Cold War era and valued its ties with the Atlantic countries. Now, the EU led by Merkel herself is supporting China. Beijing naturally interprets this as a trans-Atlantic split and a diplomatic victory over Donald Trump.

Civil War, Angry US, Angry India, and a loan shark China – Iran has just signed its own death warrant