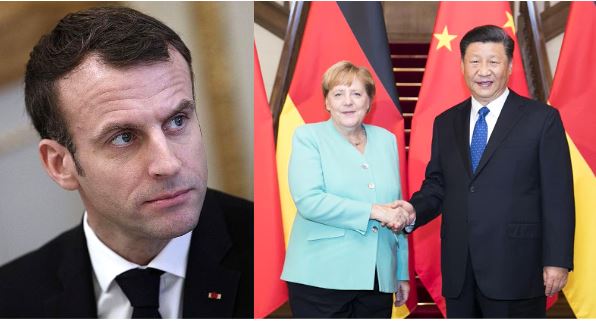 France and Germany- the two biggest powers of the European Union seem to be at loggerheads with each other over the intergovernmental bloc’s China policy. German Chancellor Angela Merkel, the de facto head of the European Union (EU), has led the entire regional grouping into a soft China policy. However, the French President Emmanuel Macron seems to be at odds with Angela Merkel.

Macron’s China stand is visibly more aggressive. As per a latest Reuters report, Paris has started restricting Chinese airlines to one passenger fight per week.

This is a retaliatory measure from France, after Beijing went against a June 12 reciprocal arrangement wherein Air France is authorised to operate three flights per week to China. But in reality, Beijing is allowing only one French flight per week.

The French Embassy in Beijing has stated, “From July 13, Chinese companies will only be authorised to make one weekly trip.” It added, “Discussions are underway between the two governments with a view to reaching a satisfactory solution.”

France says that it is applying diplomatic pressure on China in order to get a go ahead from China for extra flights. Macron has dug his heels on the flights face-off with China. France has advised travellers to be prepared for disruptions in air links between the two countries.

The Chinese Embassy is, of course, being hawkish in its approach. In a social media post, the Embassy argued that the French government wants to land all three flights operated by Air France in Shanghai. But Beijing cannot allow it owing to the high volume of international flights at the Shanghai airport.

The Chinese Embassy has, in fact, given a subtle threat to France by stating, “We hope France would re-examine relevant decisions in consideration of the broad Sino-French relations, return to the path of dialogues and consultations, meet China halfway and properly resolve flight-related matters between the two countries.”

It is clear that France is going to approach the issue in a very different way from Germany. And to put it on record, this is not for the first time that the Macron administration has taken a strong China stance. France and Germany disagree on every controversy involving China.

On the issue of Taiwan too, the reactions of France and Germany have been remarkably different. The German Foreign Ministry has replaced Taiwan’s official flag with a white flag. Admittedly, Berlin abides by Beijing’s ‘One China Policy’.

On the other hand, Paris recently decided to sell arms to Taiwan much to the ire of China, with the Dragon as usual resorting to threats against France in a bid to stop France from selling arms to the self-ruled Taiwan. In response to China’s protests, France minced no words as it boldly told China to focus on the coronavirus pandemic instead.

Not just Taiwan, even when military tensions escalated between India and China, France was the only EU country to have taken India’s side. Otherwise, the Germany-led spineless bloc did not really have the steam to take on an expansionist China.

Paris had however fast-tracked the delivery of Rafale fighter aircrafts to bolster the Indian Air Force (IAF) and Florence Parly, the Defence Minister of France had also offered her condolences to her Indian counterpart Rajnath Singh.

She had said, “This was a hard blow against the soldiers, their families and the nation. In these difficult circumstances, I wish to express my steadfast and friendly support, along with that of the French armed forces. I request you to kindly convey my heartfelt condolences to the entire Indian armed forces as well as to the grieving families.”

Finally, on the issue of Huawei too, France has decided to take Trump’s side. Paris has decided to side-line and phase out the controversial Chinese telecom giant from its 5G network.

France is poking holes in Berlin’s pro-China diplomacy. Ever since the anti-China sentiment started building up. Germany ensured that the EU played down the criticism of Beijing.

Germany maintains strong trading ties with China and believes in the flawed policy of “Wandel durch Handel (change through trade)” as far as Beijing is concerned. Merkel wants the entire EU to follow this policy, even when Member-States including France, Estonia, Czech Republic, Sweden and Spain are being troubled by China.

Led by Merkel, the EU has embarrassed itself time and again by bending its knee to China. Beijing has been able to get EU into dialling down China’s criticism in an official report. In May, even the Chinese State media published a censored version of a friendship letter written by EU Ambassadors to China.

Due to Merkel’s ambitions to side-line Trump and forging closer ties with Beijing, it is the interests of the individual EU States that have suffered. France seems to take none of Germany’s pro-Beijing approach. It is embarrassing Germany at a global level.

Macron’s insistence on standing up to Chinese bullying can potentially open up the EU to a major break-up. Once that happens, the European Continent itself might get divided into a new binary, viz. pro-Beijing and anti-Beijing.