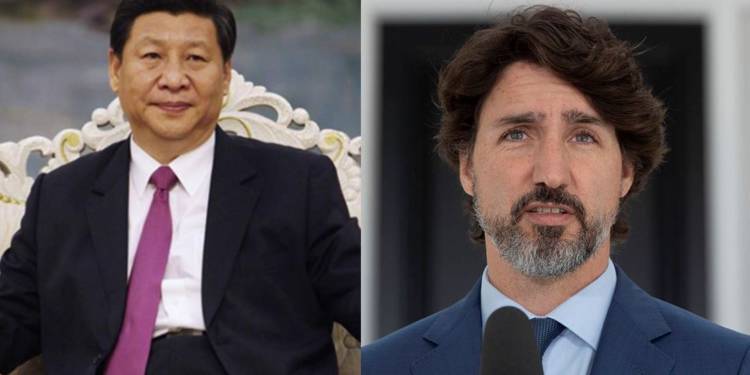 Canada is one of the many countries that are fighting endless battles with a hawkish China. But Justin Trudeau is also facing a unique challenge back home. Canadians feel that their Prime Minister’s China policy is not aggressive enough, especially when it comes to saving the two Canadians– Michael Kovrig, a former diplomat, and Michael Spavor, a businessman who are in essence, imprisoned and held hostage by China in retaliation to Huawei CFO Meng Wanzhou’s detention in Canada.

In fact, the latest survey conducted by Nanos Research, a premier Canadian public opinion and research organisation has revealed that more than half of the Canadian citizenry feels that PM Justin Trudeau should take more aggressive action for persuading Beijing to release the two Canadian nationals.

53% of the respondents surveyed say Canada should step up the heat on Beijing by taking strong action such as blocking China from buying Canadian companies or denying entry to Chinese government servants and their families who want to settle down or study in the North American country.

The arbitrary detention of Kovrig and Spavor has become the tipping point of the Canadian outrage against Beijing. The two Canadians were detained by China in a barbarian tit-for-tat measure against the arrest of Huawei Chief Financial Officer (CFO) Meng Wanzhou by Canada in December 2018, on an extradition request from the United States.

The Huawei CFO was arrested because she was accused of violating the US sanctions on Iran. Apparently, Wanzhou is very important to China. She is not only a senior Huawei executive, but also the daughter of Huawei founder Ren Zhengfei. Therefore, China resorted to primitivity and barbarity. The two Canadian nationals have been arrested for no reason.

No other modern country encourages “hostage diplomacy” except China. Beijing’s message to Canada is loud and clear- release Meng Wanzhou or let the two Michaels die. Chen Weihua, the European Union (EU) Bureau Chief of the State-owned China Daily newspaper even tweeted, “People often fail to note that Meng is worth 10 Kovrig & Spavor, if not more.”

Trudeau himself has been anti-Beijing in his approach in line with the global and Canadian backlash against China.

However, from the beginning of the COVID-19 Pandemic, Trudeau has been facing intense criticism for his weak line on China. The opposition- Conservative Party has made a big issue out of Trudeau’s failed China policy, which has led to Canada’s Prime Minister taking rare swipes at Beijing.

In between Trudeau’s anti-Beijing remarks, there have been certain awkward moments too.

During a virtual sitting of Canada’s House of Commons in May, Conservative MP Ed Fast accused the Trudeau government of not thanking Taiwan for their delivery of half a million surgical masks to Canada, free of cost. Surprisingly, the Canadian PM dodged the questions and did not even do so much as to name Taiwan, leave alone using the words “Thank You” and ‘Taiwan’ in the same sentence.

Embarrassed rather publicly, Prime Minister Justin Trudeau was forced to thank Taiwan himself, as the media caught his government clearly towing the Chinese line and refusing to acknowledge Taiwan’s existence.

Trudeau’s inability to take stern action also arises out of Canadian inexperience on geopolitical matters. This is probably the first time that Ottawa is fighting a hostile foreign regime. Otherwise, the country with the world’s longest undefended land border and three surrounding Oceans has never gone through conflicts and international crises.

Nanos said, “Canada’s default position all along has been to focus on diplomacy because we are a middle power.” He added, “Usually being tough with superpowers is not part of the Canadian DNA, but it looks in this current environment that Canadians are at the point where they would be supportive of the government being much more aggressive with the Chinese.”

Within the democratic world that is taking on Chinese belligerence, Trudeau appears as a real weakling. Prime Minister Modi had taken no time in banning 59 Chinese apps after the Galwan Valley bloodshed, Australia PM Scott Morrison has been leading a tirade against China at a great economic cost and the US President Donald Trump has been damaging China’s export-based economy with steep tariffs.

Beijing’s actions against Canada are no less provocative, yet Trudeau hasn’t really done anything to hurt the Chinese economy.

With passage of time, Trudeau would realise the cost of not matching up to Chinese aggression. The narrative that Canadians do not care about foreign policy might no longer hold true. If Trudeau doesn’t understand this, the Canadian voters will make him understand when the country goes to Federal Elections in 2023. Taking an anti-China line is not enough. Trudeau must act and act fast to hurt China.

Civil War, Angry US, Angry India, and a loan shark China – Iran has just signed its own death warrant