George Floyd’s killing caused outrage across the world, but no one cares about White farm murders in South Africa 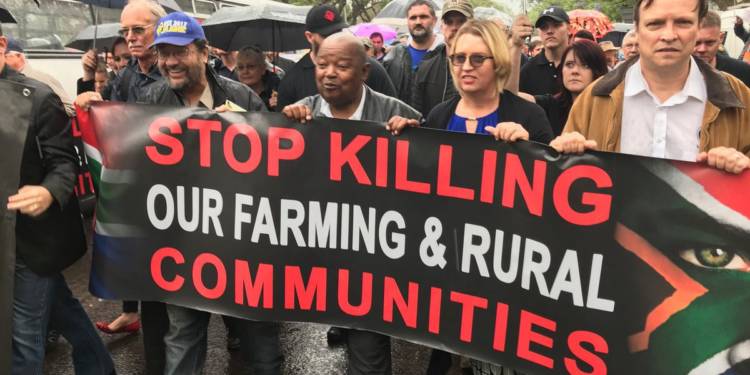 At a time when there is much discourse in favour of ‘Black Lives Matter’, as should rightfully be, what is appalling is the violent dismissal by a few to even recognize ‘All Lives Matter’ as a legitimate movement seeking to put forward the plight of various persecuted groups of people in front of the world community. One such group of people is that of Whites in South Africa. To be precise, White farmers, as reported by TFI earlier, have almost accepted that they are all living on borrowed time, and that an attack on their lives is not a question of ‘if’, rather that of ‘when’. Sadly, nobody is speaking up for the white farmers of South Africa, who are reportedly being killed in hordes every year for their skin colour.

Some argue that such killings are not racial in nature, instead, bear similarity to any other small-time crime committed across the country, and the world. However, what they fail to recognize is the fact that White farmers are killed in the most gruesome of ways possible, which would put even a devil incarnate to shame. Take for instance the recent slitting of throat of a 26-year old pregnant woman in Weenen, KNZ, South Africa. The lady, mother to two children already, was pregnant with a third, and was killed by a racial mob hunting white farmers in the country. The murder of the pregnant woman has stirred a much-needed debate in South Africa – that of the brutalities inflicted upon white farmers by mobs of marauders. Interestingly, while many claim that a majority of White farmers are attacked with the motive of robbing them, absolutely nothing was stolen from the slain woman’s house. She is survived by two children and a husband.

In another similar case this month, Former Royal Navy sailor Julian Stobbs was killed after having taken multiple gunshots to the head and chest while defending his partner, Myrtle Clarke in an early morning raid on their farmhouse. The couple, also known as “The Dagga Couple” were a household name in South Africa, for it is them who had marijuana decriminalized for personal consumption in the country. A statement on the couple’s Facebook page ‘The Dagga Couple’ hailed Julian as “our hero.” It said: “During the early hours of Friday, 3 July, 2020, an armed robbery took place at the property of Jules Stobbs and Myrtle Clarke – best known as The Dagga Couple. The attackers entered the couple’s bedroom and shot and fatally wounded Jules Stobbs. Myrtle was physically left unharmed and the attackers made off with two cell phones and two laptops.”

TFI had earlier reported how farm killings in South Africa are not spoken about. A piece of land in Plaasmoorde houses over 2000 white crosses, each cross signifying a white farmer killed in racial attacks in the country since 1994. In 2017 alone, independent figures suggest 84 white farmers were killed. Such are the conditions of white farmers in South Africa, that they are forced to resort to seeking training by means of a tactical survival course. According to AfriForum’s 2019 statistics on farm attacks and murders released in February this year, there were 552 farm attacks and 57 farm murders.

Meanwhile, the South African cricket team and the game community at large could not get more dismissive about the rampant killings of Whites in South Africa. Those in the cricket circles of the country are not even pretending to be sympathetic to the cause of white farmers, and are instead explicitly dismissive of their plight. Faf du Plessis, South Africa’s former Test and T20I captain, showcasing a similar sentiment, stated, “All lives don’t matter until black lives matter.”

Former South African cricketers Rudi Steyn, Pat Symcox, Boeta Dippenaar and Brian McMillan criticised Lungi Ngidi for not showing solidarity against White farmers in the country. South African speedster Ngidi’s comments on the Black Lives Matter movement had prompted the said cricketers to dissent, and also call upon people to speak against crimes being committed more frequently than ever now, on Whites in the country. As a matter of fact, the four players who did actually speak up for Whites, are now being subtly referenced to as ‘racists’ by the colleagues.

However, death is not all that white farmers have to fear in South Africa. The government too is doing all it can to effectuate socialist practices upon the people, the hits of which are going to majorly be taken by whites. The ‘land expropriation without compensation’ will give the government the power to usurp white owned farmlands (without paying for them), and equally distribute them among the black population. Whites in South Africa allegedly own over 70 percent of the farm and agricultural holdings in the country despite people of colour making up 90 percent of the population. Already, the affirmative action laws, while noble in concept indeed, have immensely diluted South Africa’s institutions. Meant to provide a healing touch for people of colour who were colonized and treated in an inhuman fashion, the affirmative action was supposed to carry out ‘Black Empowerment’, but has instead ended up side-lining the Whites, and snatching away deserving opportunities from them.

Now, however, amidst a growing spate of violence against White farmers, there is a growing political consensus, minus the ruling African National Congress, that the issue must be finally addressed for what it is. The Democratic Alliance (DA), which is the second largest political front in South Africa said that they are lobbying to hold an urgent debate on farm murders, after a series of gruesome crimes were reported during the Coronavirus related lockdown. They also said that the killing of the pregnant woman demanded urgent reform.

‘All Lives Matter’ can very much co-exist alongside ‘Black Lives Matter’ as a movement. BLM activists cannot go about dismissing and abusing those who speak of the plight of various people, who may or may not be of colour. The gruesome killings of White farmers in South Africa should send shivers down the spines of all people. It is high time that the world, while speaking out against racial discrimination meted out against the Blacks, also starts addressing threats to life faced by a multitude of people around the globe, who do not have the backing of a massive global campaign behind them.

Amid outrage over China claiming Vladivostok, a desperate Xi Jinping reaches out to Putin to ask for help against USA