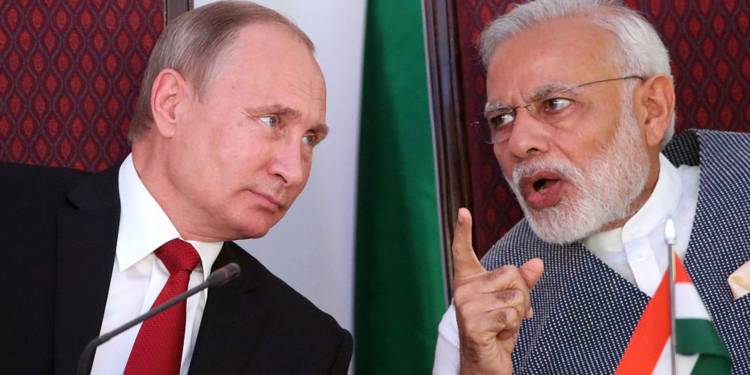 As matters heat up in the Indo-Pacific with the Sino-India tussles and military tensions at the core of geopolitical equations, both India and China have been competing to draw Russia closer to them. PM Modi is increasingly aware of Russia’s unique challenges in the Indo-Pacific and the Indian government has therefore been able to effectively avert a Sino-Russian alliance.

With the Chennai-Vladivostok sea route, India has been pulling Russia deeper into the current geopolitical equation in the Indo-Pacific. China’s territorial claim on Vladivostok is another icing on the cake.

Recently, the Indian envoy to Russia, D. B. Venkatesh Varma said that India wants Russia to be more involved in the Indo-Pacific. While New Delhi is now inviting Moscow to play a bigger role in the Indo-Pacific, the foundations were laid last year itself when the India signed a pact with Moscow for the development of the Chennai-Vladivostok sea route.

The sea route connects the Russian Far East with India and it passes through the South China Sea, which is claimed by China.

The Kremlin claims that the Indo-Pacific is an artificial concept that is divisive and aims to contain China. Due to its transactional relationship with Beijing, Moscow tries to give the impression that it has nothing to do with the Indo-Pacific. But both India and Russia know that Moscow has a lot to do in the Indo-Pacific.

Putin understands that Chinese territorial claims never remain moribund, and the Chinese Communist Party (CCP) brings them up sooner or later, like it did in the Himalayas or the South China Sea. The Chinese wolf-warriors have already dropped hints about their country’s so-called territorial interests in the Russian Far East.

Russia is aware of the threat that China poses it and India hasn’t really let this opportunity go. This is the reason why the Indian Ambassador to Russia has said that Moscow should look towards its own interests in the region which will create a mutual basis for cooperation.

The mutual basis for cooperation is, of course, the Chennai-Vladivostok sea link that will bolster Russian security in its Far East by increasing Indian influence in the sparsely populated region. The link will also make Russia a key power in the Indo-Pacific as an operational link passing through both the Indian and Pacific Oceans will dominate the strategic region.

There is a lot to achieve in the crucial maritime region as far as Russia is concerned. Apart from bolstering its security and territorial sovereignty, the sea link will allow Moscow to emerge as a much bigger naval power. In the post-Soviet era, Russia has never been able to emerge as an influential naval power. Russia’s geography hinders its naval prowess.

The Chennai-Vladivostok sea link that PM Modi envisaged much before the Sino-India powerplay allows Russia to expand its horizons to what seem like largely unexplored areas for a post-Soviet Russia. Ultimately, the sea link could emerge as the precursor to Indo-Russian naval cooperation at the expense of China.

India’s attempts to draw Russia deeper in the Indo-Pacific seem to have unnerved China too. After his overzealous diplomats went overboard with the Vladivostok debate, Jinping himself tried to make amends for the grave error. Earlier this month, Jinping himself called Putin and about safeguarding each other’s “sovereignty, security and development interests.”

According to Chinese state media Xinhua news, the Chinese foreign minister Wang Yi also had a conversation with his Russian counterpart Sergei Lavrov on Friday. Beijing is trying to twist the narrative and therefore Wang Yi brought up the issue of “US unilateralism” while alleging that the US was pursuing a “Cold War mentality” in its policy toward China.

The Sino-India rivalry is giving way to serious diplomatic powerplay. Both countries want key players and influential countries to be their side. Russia is, of course, the biggest of such key players that neither India nor China would want to lose. But India’s has remained a step ahead with Russia, despite getting close with the US.

Italy wants ITALEXIT! Italy is raging against the EU and Giuseppe Conte may not be able to stop Italy now