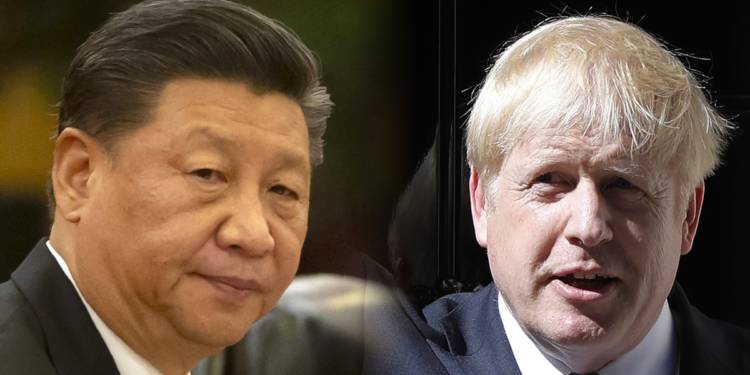 From Huawei to South China Sea to the Uighur Muslims concentration camps and Hong Kong, the United Kingdom has got Beijing cornered on all key issues. And China has no answers. The Chinese Communist Party (CCP) is rattled and has literally no answers. Over the past two days, Beijing and the Chinese state media have been only issuing threats- both blatant and subtle, to the UK.

In the past couple of days, London and Beijing have crossed swords over all these issues. Speaking about the Uighur Muslims concentration camps being run in the far-Western province of Xinjiang in China, the British Foreign Secretary Dominic Raab said that the Uighur community is being tortured and suffering from abuse of their human rights.

“It is clear that there are gross, egregious human rights abuses going on, which is why in Geneva at the UN we raised this with 27 partners … to call out the government of China for its human rights abuses of the Uighurs, also of Hong Kong,” Raab added in a local radio interview.

On the issue of Huawei too, the UK has asked Japan for Huawei alternatives in 5G networks. Ever since the UK banned the controversial Chinese telecom giant- Huawei, Beijing has been warning that the United Kingdom’s 5G telecom market would suffer in absence of Huawei.

But now the Nikkei business daily has reported that London has asked Tokyo to help the UK build its 5G wireless network without Huawei. The UK is reported to have cited Japanese tech firms- NEC Corp and Fujitsu Ltd as potential suppliers.

Meanwhile, The Times has also reported that British military planners have formulated plans for deploying the HMS Queen Elizabeth carrier in the Pacific as a part of an international alliance to confront Beijing.

Moreover, the UK has also reportedly decided to suspend its extradition treaty with Hong Kong amidst rising tensions with Beijing. Australia and Canada have already suspended their extradition treaties with the former British colony after the brutal enforcement of the draconian National Security Law in the city by the Chinese Communist Party (CCP).

China has been trying hard to explain its excesses and misadventures but it has failed miserably. On the issue of Uighur Muslims, for example, the Chinese Ambassador to the UK Liu Xiaoming got driven out of his wits during an interaction with the BBC’s Andrew Marr.

Appearing on Marr’s show, the Chinese Ambassador acted like a true wolf-warrior from China. He hit out at “so-called Western intelligence” and accused the West of making false allegations against China. On the question of forced sterilisation and concentration camps in Xinjiang, the Ambassador said, “There is no so-called massive forced sterilisation among Uighur people in China. It is totally against the truth. I cannot rule out single cases for any country. There is no such concentration camp in Xinjiang.”

Xiaoming was however taken aback on being shown a shocking footage of blindfolded people being loaded into trains. All that the Chinese Ambassador could say was that “did not know” what the video was showing.

The sudden British push-back has rattled China, which has naturally started threatening and criticising the British moves. The Chinese Ambassador to the UK, the Chinese Foreign Ministry and CCP mouthpiece Global Times have been constantly trying to warn London against more such moves aimed at containing Beijing’s influence.

On the issue of British military planners considering stationing an aircraft carrier in the Pacific, Xiaoming said that it would be a “very dangerous move”. Beijing’s top envoy in the UK further warned that as London cuts trading ties with the European Union, it should not “gang up with the United States on the Chinese.”

The Global Times has suffered a habitual melt-down amidst renewed British criticism of the Chinese excesses. And there is increasingly a tendency to play down the British push-back as a result of Brexit. Beijing is trying to play victim here by suggesting that the UK has ganged up with the United States against China after cutting ties with the EU.

Hu Xijin, the Tiananmen protester-turned-Global Times Editor-in Chief tweeted, “Is the UK a European country? Chinese people now see it more as a Five Eyes member which is tightly controlled by the US. China will certainly counter UK’s sanctions on China. But to be honest, those reciprocal sanctions are all in areas that are insignificant.”

Is the UK a European country? Chinese people now see it more as a Five Eyes member which is tightly controlled by the US. China will certainly counter UK’s sanctions on China. But to be honest, those reciprocal sanctions are all in areas that are insignificant.

Moreover, on the issue of London searching Japanese alternatives for Huawei, the Global Times has quoted the Chinese Foreign Ministry as saying, “We are opposed to any violations of market rules and principles of fair competition to exclude specific companies or using national security to suppress foreign companies and block cooperation.”

We are opposed to any violations of market rules and principles of fair competition to exclude specific companies or using national security to suppress foreign companies and block cooperation: Chinese FM said after the #UK asked #Japan for #Huawei alternatives pic.twitter.com/VKt8euGlDF

The Chinese reaction on the Uighur Muslims issue too is an exercise in self-denial. The Chinese state media has quoted Chinese Foreign Ministry spokesperson Wang Wenbin as saying that Dominic Raab’s claims of the so-called “forced sterilization” is “utter nonsense.” The Chinese official went on to say that Xinjiang-related issues were not about human rights, religion or ethnicity, but about counterterrorism and anti-separatism.

The Global Times has also quoted the Chinese Foreign Ministry as urging the UK not to go further down the “wrong path” in order to avoid further damage China-UK relations, over the UK’s plans to suspend the extradition treaty with Hong Kong.

China urges the #UK not to go further down the wrong path to avoid further damage to China-UK relations, Chinese FM said after the @DominicRaab said he may suspend the UK's extradition treaty with #HongKong. https://t.co/IwGIknKen2 pic.twitter.com/qeupe9jS6B

The UK has cornered the paper dragon on the most contentious of issues. As the UK prepares to punish China for its misadventures, all that a rattled Beijing can do is turn restless and issue a spate of threats to London.