The beginning of Cold War-II 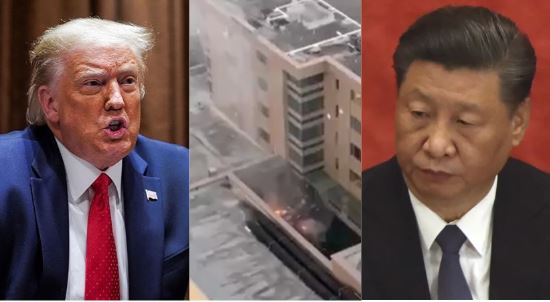 The Trump administration has made it official- Washington is going to lock China in an all-out Cold War. The US has drawn first blood by asking China to shut its Consulate in Houston, Texas.

In a strongly worded statement, the US State Department spokesperson Morgan Ortagus said, “We have directed the closure of PRC Consulate General Houston, in order to protect American intellectual property and Americans’ private information.” This comes at the heels of reports of China stealing American intellectual property and enriching itself at the cost of compromising Washington’s interests.

Ortagus came down heavily on China and added, “The United States will not tolerate the PRC’s [People’s Republic of China] violations of our sovereignty and intimidation of our people, just as we have not tolerated the PRC’s unfair trade practices, theft of American jobs, and other egregious behaviour.”

The State Department spokesperson further cited the Vienna Convention to argue that States “have a duty not to interfere in the internal affairs” of the receiving country.

The Trump administration was planning tough action against China over the issue of intellectual property theft for quite some time. The Federal Bureau of Investigation (FBI), the principal Federal law enforcement agency of the US was already unleashed on Beijing.

Recently, FBI Director Christopher Wray had himself revealed that the domestic intelligence body of the United States is opening a China-related counterintelligence case every ten hours. It was expected that this would lead to a major pushback against the Chinese campaign to steal American Intellectual Property (IP).

The FBI Director had also claimed that the Chinese IP theft is on a level “so massive that it represents one of the largest transfers of wealth in human history.”

It seems that the Trump administration found actionable material against Beijing and therefore decided to take the extreme step of ordering China to shut its Consulate. Meanwhile, China has gone bonkers after the US gave a firm blow to the rogue State.

China has vowed revenge after the latest move from the US. The Chinese Foreign Ministry spokesperson Wang Wenbin has said, “It is a political provocation unilaterally launched by the US side, which seriously violates international law, basic norms governing international relations and the bilateral consular agreement between China and the US.”

He further said, “China strongly condemns such an outrageous and unjustified move which will sabotage China-US relations. We urge the US to immediately withdraw its erroneous decision, otherwise, China will make legitimate and necessary reactions”.

Meanwhile, the CCP mouthpiece Global Times has suffered a huge meltdown even by its own standards. It is publishing propaganda stories with representative images of an intense clash between the US and China.

The mouthpiece has described the US move to order closure of the Chinese consulate as “a reckless and dangerous move which analysts said will further flare up ongoing tensions between the two largest economies in the world.” The ‘analysts’ in Global Times terminology is a pseudonym for Chinese wolf-warriors and Foreign Ministry officials.

According to WION, China could order the closure of the American consulate in Wuhan- the notorious Chinese city where the COVID-19 Pandemic was manufactured. The initial reactions from China too suggest that Sino-American tensions would most probably escalate from here.

Meanwhile, the Trump administration’s decision to shut the Chinese Consulate is getting vindicated in Houston. Hours after the US asked China to vacate, the Houston police received a firefighter call. Smoke was observed in the courtyard area. Beijing is believed to have been burning secrets- stolen American IP to be precise, in its Houston Consulate.

Houston Police tweeted, “Officers were not granted access to enter the building.”

BIG: Hours after US asked China (as per @HuXijin_GT) to vacate its Consulate in Houston, now firefighters can be seen responding to reports of people burning documents at the Chinese consulate. What secrets are Chinese diplomats burning? Via @alexsalvinews pic.twitter.com/J0iPLHma0F

About 8:25 pm on Tuesday, our officers responded to a meet the firefighter call to the China Consulate General in Houston building at 3417 Montrose Blvd.

Smoke was observed in an outside courtyard area. Officers were not granted access to enter the building. 1/2

Moreover, Beijing has also been trying to influence top American officials and academicians as a part of its IP theft campaign.

The US is cracking down on Chinese spies. The US Justice Department has also charged two Chinese men accused of spying on American companies doing COVID-19 research.

Apart from the IP theft issue, tensions were peaking between China and the US already. The US President Donald Trump and his administration have decided to put China in its place. The US has triggered a global outrage against Huawei, a Chinese telecom major and the biggest private company in China.

Trump has also led the global fury over Chinese belligerence in the South China Sea, Hong Kong and Taiwan. The Trump administration has also slammed Beijing for “instigating” a deadly confrontation against India in the Himalayas.

Trump’s move to shut an entire Chinese Consulate in Houston is going to trigger a pattern of tit-for-tat reactions between the US and China. The closure of the Houston Consulate is most likely the turning point in US-China relations that will lead to spiralling tensions and ultimately push the world into a new Cold War era.