China harasses Vietnamese fishermen with impunity. Not anymore. US has come to its rescue 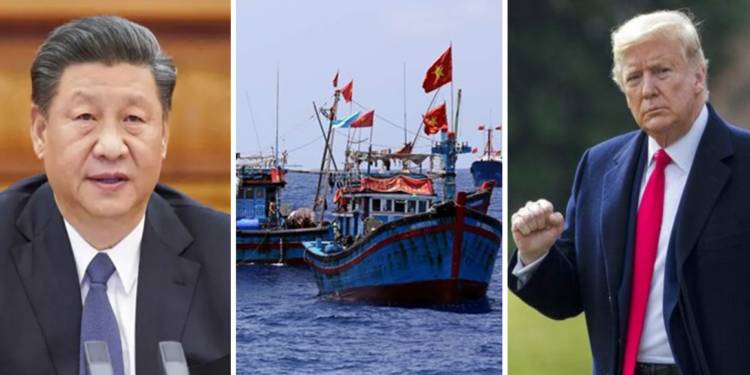 China’s attempts to placate Vietnam have boomeranged, as Hanoi is defying the belligerent Dragon all over again. And the issue of escalating Sino-Vietnamese tensions is unsurprisingly the South China Sea disputes. Miffed with the annual Summer fishing bans that China imposes in the entire South China Sea in order to harass Vietnamese fishermen, Hanoi has warmed up to Washington.

As per VnExpress, a popular Vietnamese newspaper, the US and Vietnam have inked a Memorandum of Understanding (MoU) which includes support for Vietnamese fishermen against illegal “intimidation” of the latter’s fishermen in the disputed waterways of the South China Sea.

The MoU bolsters Vietnam’s capabilities when it comes to fisheries management and law enforcement. The MoU has been signed between the American Ambassador to Vietnam Daniel J. Kritenbrink, and the Director-General of the Directorate of Fisheries (DFISH), Tran Dinh Luan.

Kritenbrink said, “The United States has a great deal of experience in managing fisheries and enforcing regulations, which we are more than happy to share.”

The US-Vietnam MoU comes in the backdrop of Sino-Vietnamese unilateral ban on fishing in the entire South China Sea.

As per its “Nine-dash line” theory, China encircles 90 per cent of the South China Sea waters as far as 2,000 kilometres away from mainland China. Beijing claims exclusive maritime rights even in the territorial waters and EEZs of other countries in the region like Vietnam. In order to affirm its “historical maritime rights”, China has been imposing unilateral fishing bans since the year 1999 in the entire South China Sea.

Every year, the Chinese State media announces the unilateral fishing bans in the Summer season with much fanfare. This year too, China declared the annual fishing ban from May 1 to August 16, and also vowed to enforce it strictly. The vow of strict enforcement was a threat to arbitrarily and bully local Vietnamese fishermen.

China has been particularly adamant about enforcing the fishing ban this year because it wants to leave Vietnam and other fisheries-dependent countries in the South China Sea starving for food amidst the Coronavirus Pandemic. However, Vietnam, which is currently leading the ASEAN, too has been far more defiant in opposing the Chinese fishing moratorium this year.

Days after China declared the annual ban, Hanoi had told its citizens not to care for the Chinese diktat and to keep fishing. In the month of May, the Vietnamese Ministry of Agriculture and Rural Development had sent a letter to the local governments asking them to apprise the fishermen of China’s “invalid” fishing ban, but also to “encourage fishers to stick to normal production within the limits of Vietnam’s territorial waters.”

Moreover, a report appearing on VietnamNet, which is operated by the Vietnamese Ministry of Information and Communications had stated, “The People’s Committees of provinces and cities shall direct functional agencies to intensify the management and supervision of fishing activities of fishing ships at sea.”

Later, the Eurasian Times suggested that Vietnam was bolstered by support from major Indo Pacific powers- India, the US and Australia, and therefore it defied the Chinese fishing ban in the South China Sea.

The Vietnam Fisheries Society, a leading Vietnamese NGO in the fisheries sector, has also been highly critical of the fishing ban imposed by China. In the month of May itself, it had asked the government to take “strong action” against China’s fishing ban.

Last month, the Chinese Coast Guard harassed Vietnamese fishermen. A Chinese vessel and a speedboat had chased, rammed and damaged a fishing boat owned by a 42-year old Vietnamese fisherman identified as Nguyen Loc. Loc and 15 other fishermen were on the boat when the Chinese Coast Guard troops attacked it. The Vietnam Fisheries Society had described the Chinese action as “inhumane”, and had also demanded compensation from Beijing.

The Vietnamese Fisheries Society had also shot off a letter to the Government Office, the Central Commission for External Relations, the Ministry of Agriculture and Rural Development, and the Foreign Ministry. The NGO that represents hundreds of thousands of Vietnamese fishermen stated that China’s “inhumane actions, which threatened the life and damaged the properties of Vietnamese fishermen.”

Pressure has thus been building upon Hanoi to do more about China’s annual fishing ban. Beijing’s unilateral actions and the harassment of Vietnamese fishermen by the Chinese Coast Guard directly impinge upon Hanoi’s sovereignty.

Vietnam did not really have any option but to warm up to Washington, especially after the US Secretary of State Mike Pompeo recently said, “Beijing uses intimidation to undermine the sovereign rights of Southeast Asian coastal states in the South China Sea, bully them out of offshore resources, assert unilateral dominion, and replace international law with ‘might makes right’.”

The Trump administration promises to stand up for the rights of the Southeast Asian nations and Vietnam has no qualms about joining hands with the US to give China a bloody nose. A defiant Vietnam promises to stand up to Chinese belligerence and nip Beijing’s salami-slicing tactics in the bud.