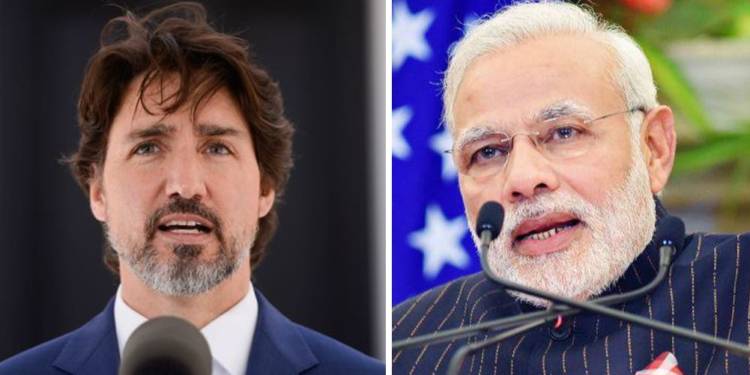 Sikhs for Justice, the joke of a terror organisation funded by Pakistan is adamant to move forward with its ‘Referendum 2020’, which is a sort of a plebiscite seeking to carve ‘Khalistan’ out of Indian Punjab, even as the puppets of Pakistan parading themselves around as Sikh political activists continue to foolishly ignore the fact that Pakistan is under the occupation of the larger share of Punjab. Interestingly also, for a new country like ‘Khalistan’ which is dreamt of by Khalistani terrorists and SFJ secessionists, Lahore being the erstwhile capital of the Sikh empire is a fact they choose to ignore, for how can they dare demand a pound of flesh from those who are funding them? Such is the buffoonery of ‘Sikhs for Justice’ that not even Prime Minister of Canada, Justin Trudeau, is taking ‘Referendum 2020’ seriously any longer.

The referendum, which is scheduled for November this year has so far found no backers in India. As a matter of fact, SFJ had to resort to morphing images of Gurdwara Bangla Sahib, New Delhi, to give their deranged supporters the impression that the Referendum is finding large-scale support in India. If the stupidity of it all wasn’t enough already, the referendum for breaking India will also be conducted worldwide, and will take into account the votes of even those individuals who are not stakeholders in the same.

The Canadian government under Justin Trudeau, in an attempt to fix its ties with India, has now explicitly stated that it will not entertain or accept the results of the Referendum 2020. A spokesperson of the country’s Foreign Ministry told Hindustan Times, “Canada respects the sovereignty, unity and territorial integrity of India, and the Government of Canada will not recognize the referendum.” The statement further said that the bilateral relationship between Canada and India “is a priority for the Government of Canada.” As a matter of fact, the same has also been conveyed to New Delhi via diplomatic channels, and Indian officials are calling the development ‘significant’, because as opposed to previous instances, the stand of the Canadian government on the issue was this time put in writing, and was a change from their earlier stance that the referendum was protected by freedom of speech and expression rights in Canada

Captain Amarinder Singh, the Chief Minister of Punjab and a staunch critic of Khalistanis lauded the move by Trudeau led government of Canada, saying that the categorical stand taken by Justin Trudeau government on this issue is exemplary. He hoped other nations and governments would come out, and be against SFJ as well—which has been banned by India as a terrorist organisation. In a statement, he also added, “failure to openly oppose the separatist SFJ could set a dangerous precedent for any country as it could be seen as a case of covert support to an organisation that is freely propagating secessionist activities”.

Justin Trudeau has no liking in India, particularly among the ruling dispensation. Trudeau has historically not shied away from pandering to Khalistani sympathisers and extremists, and has provided a safe haven in Canada to anti-India elements. As such, India’s approach viz. Canada has been simple: There cannot be a meaningful bilateral relationship with a country from whose soil secessionist activities are being orchestrated against India. Justin Trudeau is now desperately trying to make amends with India, but he must realise that a lot more needs to be done by his government when it comes to taming rogue Khalistan fantasizers.

Justin Trudeau’s apparent shift in policy with regards to Indian sovereignty and the issue of Khalistan has multiple reasons behind it. Trudeau has realised that making a foe out of India will not serve his country and its interests well. Moreover, India’s soft-power stature has risen tremendously across the world in the past few years, leading to a global consensus in the world community that the future is bound to see India exercising immense influence across the seas. As such, no country wants to be in the bad books of India.

Canada, however, has been, and perhaps still is in our bad books, and its recent move of not recognising ‘Referendum 2020’ is merely a small step in the right direction. Canada has a long way to go when it comes to fixing ties with India and winning the trust of Indians.

Meanwhile, Canada’s shift towards recognising India’s territorial sovereignty and integrity is also driven by the fact that Justin Trudeau ’s foreign policy has been a catastrophic disaster off late. Last month, two non-permanent UNSC seats were up for grabs for member states from Western Europe and other countries, but Canada could not win the same, despite campaigning for the same since 2016. A total of 128 votes were needed to secure a two-thirds majority. Norway secured 130 votes while Ireland got 128. On the other hand, even as Canada lost its bid to countries like Norway and Ireland, India won a seat at the UNSC with a thumping 189 votes. The UN has 192 members in all. The victory of India seems to have served as a cue to Canada to get its act straight and fall in line when it comes to dealing with India.

Realisation seems to have dawned upon Justin Trudeau; however, he will be well advised to eliminate all Khalistani elements in Canada before expecting a reciprocation from India. If he does not pursue the correct path in the near future, he will continue being cold-shouldered by the Indian government, much like when he was paid no attention during his state visit to India and indulged in a daily fancy dress competition.