It's nothing more than a suicide campaign 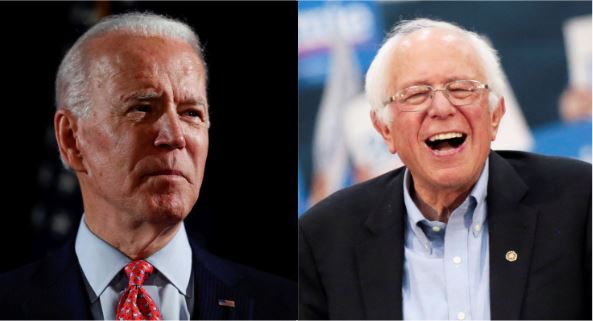 As the November Presidential elections are fast approaching, the democrats are increasingly making a joke of themselves and paving way for Donald Trump to stage a comeback. Septuagenarian Joe Biden, a known moderate and the Democrat presidential nominee is seemingly being swayed to the leftist corner as his previous rival Bernie Sanders and his coterie of ‘progressive’ thinkers are quietly hijacking the Biden campaign. (Indian context: Progressive thinkers—the likes of Ranas and Barkhas)

After being defeated by Joe Biden in the nomination, Sanders’ staff joined the former’s campaign and innocuously started injecting their own ‘liberal’ ideas. To be fair, Biden’s original campaign wasn’t drenched in any glory either but Sanders has taken it a couple of notches below and if political scholars and their assessment is to go by–has left Biden to fend for himself as Trump prepares to launch the campaign onslaught. (Side note: Trump raised 20 million dollars in his first virtual re-election campaign, doubling the mark set by Biden earlier)

A Biden-Sanders unity task force, earlier this month published a policy paper that lays down the democrats and their game plan for the upcoming elections.

After releasing the policy recommendations, it is clear as day that Sanders’ progressive staffers and supporters have been successful in pushing the former vice president to the leftward side.

And if releasing a potential ‘election-manifesto’, albeit together was a big challenge, the differing voices of opinions that are coming from within the Democratic Party are surely providing the required ammo to Donald Trump who is getting in his election groove. Trump even canceled the yearly ball-pitching event at the Yankees as he gears up for the grueling election campaign.

Ohio State Senator Nina Turner, a Democrat who was a national co-chair of Sanders’ 2020 campaign, was not as satisfied with the task forces’ policy results.

When asked by a website to rank her assessment of Biden-Sanders unity statement on a scale from zero to 100, she said: “60” on a superficial level and “one” on a substance level.

Turner was also critical of the policy paper for not including universal healthcare and cast her aspersions on the entire feasibility of the paper.

“People are dying, losing their livelihoods. If the pandemic doesn’t wake this party up to the need for universal health care. I don’t know what will.” said the senator.

The most distinguishable poll issue between Trump and Biden is the border and immigration issue. While Trump is looking to build on his border security and anti-immigration policies of the last four years, Joe Biden on the other hand is looking to take a 180-degree approach on it, possibly influenced by Sanders.

Earlier this month, the former vice president announced that under his presidentship, over 11 million illegal immigrants will be accommodated in the USA. Again, taking a leaf out of Sanders’s socialist book of campaigning.

Bernie Sanders’ campaign was built around a lot of ideological retorts. Donald Trump on several occasions has called Bernie Sanders a “socialist-slash-communist” and therefore it doesn’t come as a surprise that Biden has been forced to take this route with pressure coming in from Sanders.

The policy recommendations, jointly developed by Sanders and Biden duo has a clear influence of former written all over it. USA will be back to square one and possibly pushed even back if Biden is to take the stage.

The policy paper calls for an immediate 100-day halt to all deportations and would unleash an army of overseers to police the way the Border Patrol and ICE’s deportation officers enforce immigration policy.

The Latino voters of California, Colorado, and Nevada had voted in big numbers for Sanders on the immigration issue in the primaries he had won here. Sanders is only looking to please his vote bank. However, Biden, putting his entire campaign around such a small percentage of voters is no less than political suicide.

Bernie Sanders through the backdoor wants to keep his voters happy and with the policy paper, he is doing nothing but sabotaging Biden’s candidature.

The Presidential nominee has found himself in the murky waters for his super-ambitious $2 tn four year plan to eliminate all greenhouse gas emission from the US electricity grid. Before Sanders and his minions swooped-in, Biden’s plan was to spend $1.7 trillion over a decade. The astronomical leap in the figures is sure to leave the US exchequer in a tizzy!

While Joe Biden has batted long for an outright ban on the fossil fuels in the initial days of his candidature, it seems like he has toned it down a bit. There is no fracking ban in his policy paper but it still leaves a lot to be desired. One of the biggest issues is employment and curtailing the oil and petroleum sector (shale) is surely going to affect millions of livelihoods.

According to the Wall Street Journal, at least $1 trillion of U.S. economic output is related to the shale revolution, and more than 1.5 million Americans are employed by the industry.

Ohio and Michigan have a combined total of more than 400,000 workers in the shale industry Pennsylvania has another 320,000. Colorado and Florida each have more than 200,000 workers in oil and gas. And all the aforementioned states are the swing states.

With millions of job losses facing Biden, the former vice-president during Obama’s tenure has made ostentatious claims that he will create millions of jobs in the clean energy sector.

Meanwhile, Biden is the same person who in December last year had suggested a mind-numbling idea that if coal miners lose their job due to his policies then they should learn to code.

Although, it seems quite a stretch, to provide such a large number of jobs but if one gives the benefit of doubt to Biden, then also there is another monstrous challenge facing him, right in the face.

David Keith, a climate and energy expert at Harvard in 2018 had published a research that found that America’s transition to solar and wind would require up to 20 times more land area than previously thought. Acquiring such vast multitudes of land and then relocating the people, getting their nods, getting Court’s nod and everything in between seems like one gargantuan task.

From opposing huge solar farms in Virginia to the installation of new wind turbines on the Hawaiian island of Oahu, the protests have been steadily taking place, even against green sources of electricity.

Joe Biden might not win the elections and despite the poll pundits saying Biden holds an edge over Trump, one cannot help but oversee the general perception. Also, the American media hasn’t been exactly hitting the bull’s eye in public sentiment either. (Read: 2016 elections)

Biden’s campaign is nothing but a giant political petri dish. In a nutshell, his campaign his half-cooked with another cook by the name Sanders coming every now and then spoiling the broth.

We have heard an idiom on similar lines, isn’t it? Too many chefs..err! Biden might have forgotten the idiom by now.

There was a reason that leftists like Bernie Sanders and Warrens had to drop out of the presidential race. America doesn’t want a radical leftist in power and if Joe Biden sticks with Sanders then whatever little hope he had of making it to the front will be diminished slowly.

‘We support One China Policy, but cancel our debt too,’ Africa has trapped China in its famous BRI debt trap