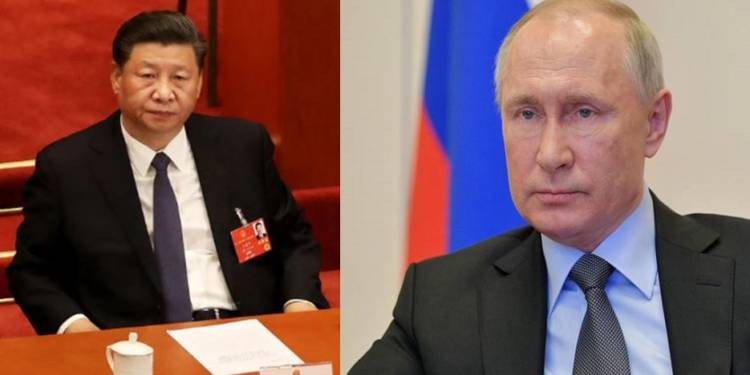 The Russian Navy plans to become a supreme naval power with these new generation arms and while it has generated a lot of fears in the United States due to anachronistic formulations of the Cold War-era, Moscow seems to be preparing itself against a more realistic threat posed by an expansionist China right in its backyard. From the Arctic to the South China Sea, Russia has a lot of interests to protect from China.

A post-Soviet Russia became a not-so-powerful naval force because the geography played to its disadvantage. But now there are new threats and opportunities on the horizon which have encouraged Putin to envisage a powerful Navy. Make no mistake, the latest threat to the Russian sphere of influence does not come from the West or the US, rather it comes from an increasingly belligerent and intrusive China.

Putin is thinking about how geopolitical equations will change in the medium-term and the long-term, while it will continue to share an “axis of convenience” with the Chinese Communist Party. In the medium-term, Russia is getting pulled into the Indo-Pacific by an increasingly assertive India, an old friend of Russia.

In fact, recently Chinese wolf-warriors staked claim on the Russian Far East city- Vladivostok. India hasn’t let the opportunity go. New Delhi has been pushing a Chennai-Vladivostok sea route that passes through the South China Sea, which too China claims as its own. In this backdrop, the Indian envoy to Russia, D. B. Venkatesh Varma recently said that India wants Russia to be more involved in the Indo-Pacific to protect its own interests, amid the rising threat posed by China.

Russia seems to have eyed an opportunity to become a more powerful Navy. In the long-term, however, Putin doesn’t only have to protect the sparsely populated Russian Far East, but he also needs to take care of the Arctic region. As global warming melts the polar ice cap, the Arctic region is coming closer to becoming a new maritime trade route. Ports will become operational for longer parts of the year and more amenable to commercial transportation.

The Kremlin believes that the Arctic is Russia’s “privileged sphere of influence.” Russian officials strongly asseverate the primacy of the five Arctic Ocean coastal countries. The Putin administration thinks that it is in line with the international maritime law as the five countries have direct access to the Arctic Ocean, and have Exclusive Economic Zones (EEZs).

Sino-Russian bonhomie is a myth and favourable transactions with China can never really earn Chinese goodwill. Putin would be watching closely how Beijing is bullying its second-biggest trade partner, Japan in the East China Sea. There is no reason why China will not turn belligerent when things get down to the wire in the Russian Far East and the Arctic. Putin wants his Navy to be prepared for such an eventuality.

While conspiracy theories about Russia amassing hypersonic nuclear missiles to counter the US are bound to do the rounds, the fact remains that nothing has really changed in the Russian relationship with the Western world. The only new factor on the global scene is the Chinese belligerence that hasn’t spared even Russia.

Moreover, Putin had threatened to deploy hypersonic missiles on ships and submarines lurking outside the territorial waters of the USA, if the US deployed intermediate-range nuclear weapons in Europe. But Washington hasn’t deployed any such weapons in Europe. Therefore, Russia is not really responding to any Western threat.

Russia is looking at a bigger game here, and therefore deploying missiles that can travel five times the speed of sound and can even change their course mid-way making it very difficult for radars to track and intercept them. With the massive upgrade, the Russian Navy has sent a clear message to its problematic neighbour.

From Chile to Brazil, China is losing Latin America. One country at a time