Not a good scenario for Xi Jinping 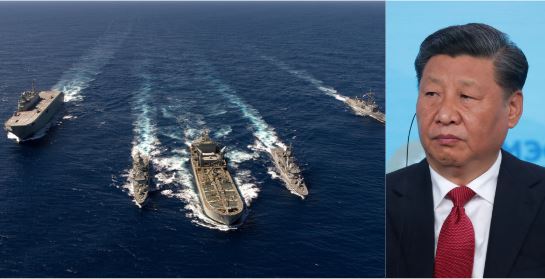 China has been rejected by the entire world for its revisionist policies, and therefore the Chinese People’s Liberation Army (PLA) Navy has turned belligerent. The Chinese Communist Party (CCP) is trying to unilaterally extinguish the claims of every other country in the entire Indo-Pacific from the South China Sea to the East China Sea and the Indian Ocean Region.

Every single Indo-Pacific power has come to recognise China as a threat and now they have started to upgrade their naval armory to take on a belligerent China. India, Australia, Vietnam, Taiwan, Japan and South Korea- all major powers have unveiled plans to match upto Chinese aggression by augmenting their own naval strength.

South Korea has traditionally devoted bulk of its resources to ground troops and close-air-support, the reason being that Seoul’s main military threat comes from North Korea, a huge land army just 30 miles away from Seoul.

But the focus is shifting to naval power for a reason. South Korea has some major maritime disputes with China in the Yellow Sea. Both China and South Korea claim an Exclusive Economic Zone (EEZ) of 200 nautical miles from their coastline in the Yellow Sea. The EEZs of the two countries overlap with each other.

Since both Beijing and Seoul are parties to the UN Convention on the Law of the Sea (UNCLOS), the maritime boundary must be determined by the Median line principle. But the CCP prefers expansionism over the UNCLOS, and claims a larger EEZ on account of its larger population and longer coastline.

Now, by strengthening its own Navy, Seoul wants to keep Chinese aggression and illegal fishing in the Yellow Sea at bay.

South Korea is not the only country to strengthen its naval power in face of Chinese aggression. Earlier this month, it was reported that Japan has developed a ‘Stealth’ anti-ship missiles that can penetrate Chinese defences.

Dubbed as the ‘smashing super-missile’, the ASM-3, which has been developed by Mitshubishi Heavy Industry, can travel five times the speed of sound and make adjustments in its trajectory making it very difficult for the enemy systems to detect and intercept it. According to the EurAsian Times, ASM-3 can sink or disable several warships in a single strike.

The warhead is in line with Japan’s primary objective of preventing the Chinese warships from reaching the open Pacific Ocean, if and when, a military conflict breaks out in the Indo-Pacific.

Australia too is looking to upgrade its naval capabilities in face of the growing Chinese threat.

Canberra recently announced a 40 per cent hike in its defence budget. The country will spend 270 billion Australian dollars (approximately 186 billion USD) on its defence programme, as against the 195 billion Australian dollars (134 billion USD) committed for the next ten years in 2016. The budget has been enhanced as a part of the new 2020 Defence Strategic Update and Force Structure Plan.

As a part of this defence upgrade, Canberra is set to buy new anti-ship cruise missiles from the US Navy. The AGM-158C Long Range Anti-Ship Missile that Canberra is set to purchase has a range of over 370 kilometres. Initially, it will be fired from the F/A-18F Super Hornet aircraft and will also be programmed into other aircraft later on.

Moreover, as part of the 400 billion Dollars plan extending upto 2030, Australia will power its Navy by replacing older frigates, adding patrol vessels and support ships. More importantly, Canberra plans to add more muscle to its naval forces in the Indo-Pacific by doubling the number of submarines. Six Collins-class diesel-electric submarine boats, each displacing 3,000 tons and a dozen new attack-class Submarines, each displacing 4,500 tons are going to form part of a power-packed Australian Navy.

Australia is also the only country outside the ASEAN to approach the United Nations on China’s claim in the South China Sea.

As far as India is concerned, it has made several moves that hint at plans of keeping the Chinese PLA Navy in check. India is using its geography to advantage and strengthening its hold on the Strait of Malacca- a narrow choke-point that connects the Indian and Pacific Oceans and serves as a critical oil supply route for China. The Andaman & Nicobar Islands lie to the Northwest of the Strait of Malacca giving India a clear opportunity to create a blockade in case of a military escalation.

According to TOI, India has moved all its frontline warships and submarines in the Indian Ocean Region (IOR). Moreover, India is also looking to buy six more long-range, maritime surveillance Poseidon-8I aircraft. This will augment India’s capacity to keep a tab over the Indian Ocean Region and track any Chinese movement in the crucial maritime zone.

And now New Delhi is also making all efforts to militarise the Andaman & Nicobar Islands, which would serve as an unsinkable aircraft carrier for India, close to the Strait of Malacca. According to a report in the Hindustan Times, the Union government has expedited the plans for basing additional military forces, including facilities for additional warships, aircraft, missile batteries, and infantry soldiers at the strategically-located Andaman Islands.

Last month, PM Narendra Modi held a virtual summit during which the two countries finalised the Mutual Logistics Support Agreement. This allows the Navies of the two countries to access each other’s ports for logistics such as food, water, and petroleum. Australia and India are thus weaponizing their strategic locations with which they can totally jeopardise China’s trade routes and oil supplies in event of a major conflict in the Indo-Pacific.

As for Vietnam and Taiwan, a proposed 6.9 Billion US dollars military initiative would benefit both these Indo-Pacific countries. Vietnam is also slated to receive a second US Coast Guard cutter this year so that it can match the Chinese build up in the South China Sea.

Every single country in the Indo-Pacific region therefore understands the need of boosting naval power in order to beat back a belligerent China, if and when, it becomes inevitable.