‘Be more like Pakistan,’ China launches a sadder version of Quad to counter the real Quad

A Made in China Quad 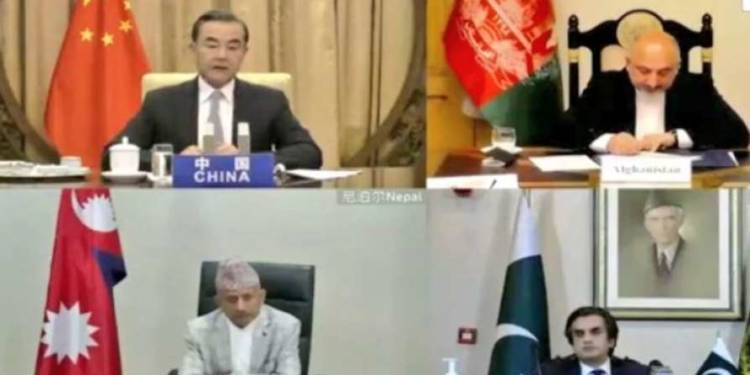 If there is one thing China is proficiently good at then it is counterfeiting products and services from other countries. For years it has imitated the applications from the Silicon Valley and shamelessly launched them in its market. Now China has employed similar counterfeiting skills but not in aping any app but in cloning a poor version of Quad to counter the real Quad. Perturbed by India’s growing clout in the neighborhood, Xi Jinping is looking to imitate the group India is a part of.

The Quad is an informal strategic grouping consisting of the US, Japan, Australia, and India and has been in existence for over a decade, but in recent times, it has become China’s Achilles heel.

Even for China, it is rare to call for four-party cooperation in South Asia without involving India. But desperate times call for desperate measures and the paper dragon is currently running amuck with the tails between its legs as international pressure continues to mount over it.

Chinese Foreign Minister Wang Yi, who hosted the call, said the four countries should strengthen their connections for regional peace and security, and called for more cooperation to prevent the cross-border spread of the virus, according to a foreign ministry statement.

China also asked Afghanistan and Nepal to be more like ‘iron brother’ Pakistan and urged to forge four-party cooperation to overcome the challenge of coronavirus.

Although the meeting started by discussing the pandemic and its effect on the countries but quickly veered off into areas that concern India, apparently at China’s behest, which wants to poke India continuously.

Wang Yi, one of the high ranking members of the Politburo said that the four countries should “actively promote the construction of the China-Pakistan Economic Corridor and the trans-Himalayan three-dimensional interconnectivity network, support the extension of [CPEC] to Afghanistan, and further release the regional interconnection dividend”

The same CPEC has crippled Pakistan and brought it onto its knees in front of China. But Pakistan seems to be in such magnificent stupor that it continues to worship China as if it is its savior. China continuously dangles the money over Pakistan’s bankrupt Imran Khan Government’s head and he like a polite servant jumps for it.

Formation of an Asian-NATO giving sleepless nights to Jinping

The formation of an Asian-NATO or the Quad is already giving the Chinese sleepless nights. Recently the navies of India, Japan, Australia, and the USA conducted naval exercises in the Indo-Pacific region.

Although the Quad so far hasn’t proclaimed itself to be a military group but the changing dynamics of the region due to China’s misadventure has given indications that this group can certainly head down the path, in the future, if necessary.

Every single Quad country is engaged in military and trade tensions with China and therefore the group has only been strengthened by China’s misdeeds.

If India invites Australia in this year’s Malabar exercise with the USA and Japan, then it will be the biggest indication that the Quad has taken the next big step.

Anticipating such moves, Beijing is looking to corner India and thus invited all the neighboring countries of India to its virtual meeting. However, a quick customary comparison of the two alliances is quick to tell one that China has grossly misplayed its hand here.

‘Immigrants are welcome,’ Post-Pandemic Japan will attract the world, to reclaim its throne from China