‘We won’t let you leave,’ China is turning Hong Kong into a jail with 3 million prisoners

CCP is getting desperate 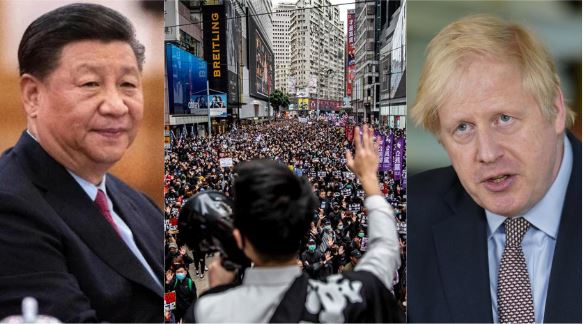 Having blatantly run over the freedoms, liberties and autonomy of the erstwhile semi-autonomous region of Hong Kong, the Chinese Communist Party (CCP) is now turning the financial city into a prison, and has threatened to not allow those who wish to migrate out of the city to settle in the United Kingdom an exit out of the city. With the imposition of the draconian National Security Law, the CCP has curbed on free speech and pro-democracy activism in Hong Kong, incarcerating all those protestors who stand up against Chinese monstrosity in their city.

The Guardian has now reported that China will not recognise the British national (overseas) passport as a legal travel document, raising the prospect that the 3 million Hong Kong citizens eligible for the passport will be banned from leaving Hong Kong by the Chinese government. Announcing the same, Chinese ambassador to the UK, Liu Xiaoming said in a press conference that the offer made by the Boris Johnson government breached the 1984 Memorandum of Agreement that promised the UK would not provide a permanent right of abode to BNO passport-holders. “Since the UK have violated their commitment, we have to let them know that we have to take measures not to recognise the BNO passport as a valid travel document,” he said.

The world community had heavily criticised China for its imposition of the security law, which the CCP claims is aimed at curbing ‘sedition’ and foreign involvement in Hong Kong. Since Hong Kong was a British colony until 1997, the blatant trampling of the rights of Hong Kongers by the CCP did not auger well with Great Britain, which early last month announced an unprecedented citizenship drive for all those citizens of Hong Kong who wish to move out of the city.

Great Britain decided that all those Hong Kongers who hold a BNO passport would now be eligible to apply for citizenship and permanent residency in the UK. The announcement served as a ray of hope for close to 6 million Hong Kongers to move out of the clutches of a tyrannical and oppressive CCP regime. While 3 million citizens of Hong Kong already hold a BNO passport, an additional 2.5 million were last month cleared by the UK to apply for the same.

The British National (Overseas) passport, or the BNO, is an exclusive travel document provided to a substantial amount of Hong Kong’s residents, born before June 30 1997, which allows them visa-free travel to the UK and a stay of up to six months in the country.

The UK had last month brought in drastic changes to its BNO passport policy, and had made it a ticket for Hong Kongers who no longer feel comfortable in the city, to avail British citizenship.  The six-month limit on the stay of Hong Kongers in the country was waived off by the United Kingdom, and the path of them applying for permanent residency in the country was also cleared.

With China now all set to derecognize the BNO passport as a valid travel document, bilateral relations between the paper dragon and UK are all set to nosedive. The latest move of China threatens to clamp down on the free will of a people, who no longer wish to reside in Hong Kong. With the imposition of the security law, it was a given fact that large swathes of the city’s population would be moving out to settle in other countries. However, China now aims at locking up people against their will in the city, and forcefully make them to face the brutalities of the CCP.

The African water wars are here: Egypt and Ethiopia could go to war over river Nile