Back in the game: Emboldened by Chinese backing, Iran steps up aggression against US 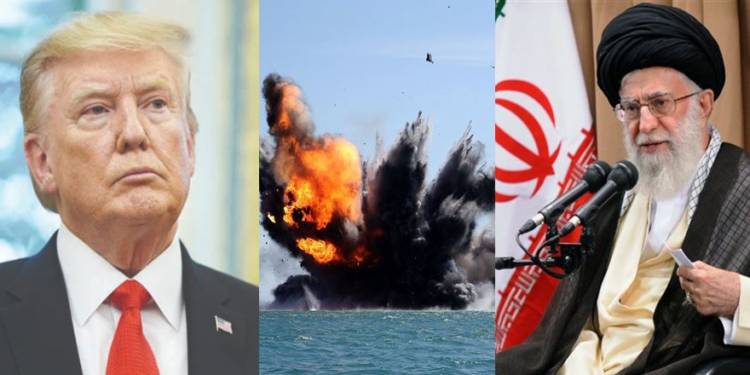 What is more dangerous than two enemies? It is two enemies combined. Iran and China have now teamed up against the United States. And days after the announcement of mega Chinese investments worth 400 billion US dollars in Iran, Tehran is turning more and more aggressive against the United States. Over the past few days, three Iranian actions have suggested that an emboldened Tehran is going to heighten tensions with the US.

Firstly, the Iranian Supreme Leader has made it clear that Tehran will not negotiate with the US. Secondly, Iran has said that it has detained the head of the US-based  “terrorist group” accused of being involved in the 2008 bombing attack in Shiraz. And thirdly, the Islamic Revolutionary Guard Corps have been bombarding a fake dummy of USA’s Nimitz-class Aircraft carrier, in an aggressive message to the US.

In a televised address, Iran’s Supreme Leader Ayatollah Ali Khamenei went high on his anti-America agenda. Insisting on remaining defiant in face of Trump’s “maximum pressure” policy, Khamenei said that Iran would expand its nuclear program and would not negotiate with the US.

The Iranian Supreme Leader was addressing his country on the occasion of  Eid al-Adha on Friday. He also drew a link between the US Presidential polls and the nuclear deal. Khamenei said, “He (Trump) is going to benefit from negotiations.” The Iranian Supreme Leader added, “This old man who is in charge in America apparently used negotiations with North Korea as propaganda.”

Ayatollah’s comments come a couple of months after Trump urged Iran to negotiate a deal with the US. Trump had said, “Don’t wait until after U.S. Election to make the Big deal.” The US President had added, “I’m going to win. You’ll make a better deal now!” Earlier in 2018, Trump had himself backed out of the Nuclear deal with Iran and had reinstated sanctions against the Shia-majority country.

Not just the Nuclear deal, Ayatollah has also said that Iran would maintain close relations with local militias as its proxies in the region. Therefore, denying another American demand.

Iran has also detained the head of the US-based  “terrorist group” accused of being involved in the 2008 bombing attack in Shiraz, a Southern Iran city that killed 14 people and injured 215. The detained Iranian-American has been identified as Jamshid Sharmahd.

A statement from the Islamic Republic’s Intelligence Ministry read, “Jamshid Sharmahd, the ringleader of the terrorist Tondar (Thunder) group, who directed armed and terrorist acts in Iran from America, was arrested following a complicated operation, and is now in [our agents’] powerful hands.” Tehran is now also alleging that Sharmahd was planning more terror attacks in Iran.

The military exercise called “Prophet Mohammed 14th” was held near the Strait of Hormuz- a crucial oil choke-point that accounts for one-fifth of the global oil output.

Two American bases- Al-Dhafra Air Base in Abu Dhabi, UAE and Al-Udeid Air Base, Qatar went on temporary alert after the launch of underground missiles.

It has been reported that US officials have said that though no missile struck the military base but prudent precautionary measures were taken and personnel was told to take cover for several minutes.

Moreover, missiles are said to have landed close enough to the military bases to be a cause of concern. The US Central Command has stated, “The United States condemns these irresponsible missile launches in the vicinity of a congested maritime shipping lane.”

CNN has learned US bases at Al Udeid and Al Dhafra went on alert this am when intel indicators showed an Iranian missile possibly headed that way. Personnel told to take cover for several minutes. No missile struck, US officials say they took prudent precautionary measures

Two bases in Middle East housing U.S. troops and aircraft went on high alert when 3 Iranian missiles splashed down in waters near the bases Tues. as part of Iran’s military exercises: official

Interestingly, Al-Dhafra Air Base is where India’s five Rafales had stopped for an overnight halt en route their way to the Ambala Air Base from France. Eurasian Times has reported, “Indian Rafale Jets Come Under Attack By Iranian Missiles In The UAE – Reports.”

According to EurAsian Times, at least three Iranian missiles landed near the Al-Dhafra Air Base in the United Arab Emirates (UAE) on July 28 where the five Rafale fighter jets were stationed.

Iran’s actions have pointed to renewed vigour with Chinese backing. The Shia majority country is weaponizing its geostrategic location near the Strait of Hormuz. It is also refusing to budge on the question of its nuclear program and is also making it clear that it won’t stop using proxy militia forces in the region.

It is no coincidence that Iranian belligerence has picked up after the sanctions-ravaged country finalised the roadmap for a comprehensive strategic partnership with China. Beijing has thus opened up a new front against the US and it is showing in the face of a belligerent Iran.