Lebanese people want to be free of terror group Hezbollah 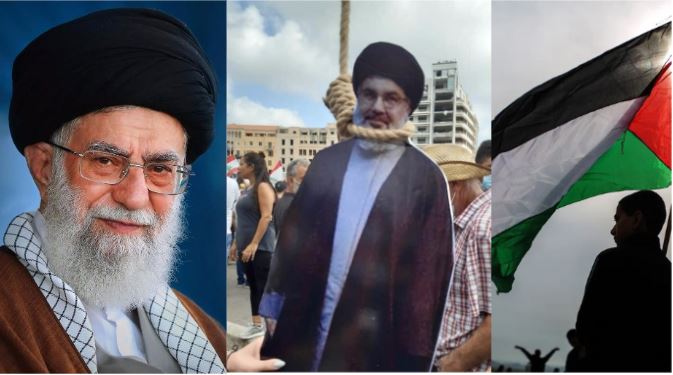 Hezbollah, an Iran-sponsored and Lebanon-based terror organisation supporting the Palestinian cause, finds its foundations shaken. And it took a huge blast to get the Lebanese people to demand a full exit of Hezbollah from Lebanon. A massive blast in Beirut’s port shattered window panes more than a mile away and engulfed the entire city in smoke and debris- the aftershock of the blast so nauseating that even Cyprus felt it 150 miles away.

Seismological monitors in Jordan recorded the Beirut blast as a minor earthquake. The Lebanese President has speculated the possibility of ‘external interference’ and Hezbollah has denied responsibility. “Experts” suggest that the humongous blast was probably preceded by a fire, possibly of firecrackers. But protests in Lebanon suggest that people know who is responsible when the government talks of ammonium nitrate and firecrackers. The anti-Hezbollah protests now threaten to bring Tehran and Palestine to its knees.

Large protests have broken out in Lebanon, demanding governmental accountability. The Beirut blast has left 137 dead, injured thousands, hundreds of thousands displaced and yet several hundred missing. The death toll is expected to rise and the protests are also bound to escalate. We are talking of a Lebanon without Hezbollah which will drastically alter the geopolitical situation of the region.

On Saturday, massive protests broke out with two primary targets- Hezbollah and the Hezbollah-backed government. Protesters even hanged an effigy of the terror group’s leader Hassan Nasrallah during the protests. A regime change is around the corner as prominent politicians and even government workers are missing. A banner reading “resignation or hang” was also spotted at the protests.

The government seems to have taken the hint and Lebanon PM Hassan Diab, backed by Hezbollah, is now looking for early elections to quell the protests. Two Lebanese Ministers have also resigned and protesters have stormed government buildings, empty Foreign Ministry buildings and the headquarters of the country’s banking association.

While the rage is directed at the government, but the ultimate target is the Hezbollah. The Iran-sponsored terror organisation has its safe havens in the country. The port where the explosion took place itself described by the former Ambassador to the UN Danny Danon as “Hezbollah’s port”- used to transfer weapons and render financial support to the terrorist group as it developed advanced missiles to be trained against Israel.

However, Hezbollah’s safe havens in Lebanon did not mean that it had the popular Lebanese support. Lebanon has always been at the crossroads when it comes to Hezbollah.

For starters, Palestine is a Sunni-majority entity, a Shia-majority Iran is the most fervent supporter of its cause, within Lebanon, there is an equal proportion of Sunni and Shia Muslims. The Hezbollah itself traces its roots to a group of Shiite Muslims in Lebanon who were in awe of Iran’s theocratic government which stormed to power after the Iranian revolution of 1979.

Iran’s Islamic Revolutionary Guard Corps (IRGC) had then eyed an opportunity to fund the budding militias and use it as a proxy in the Arab region. Hezbollah is driven by its ideology to oppose Israel and resist the West’s influence as necessary trappings of its sworn allegiance to Iran.

Today, Hezbollah is the single-biggest threat to Israel in line with Tehran’s objective of wiping the Jewish country from the face of the planet. the terror group has targeted Israel through the Lebanese, Syrian and Gaza borders with sophisticated anti-ship and anti-armour weapon presumptively supplied by Iran. Moreover, it has also targeted Israelis and Jews in foreign locations.

Meanwhile, relatively progressive voices in Lebanon too challenge Hezbollah presence. Same-sex couples marching with conservative women in headscarves show how Hezbollah has not been able to dominate the Lebanese society. Moreover, Lebanon still bears the imprint of its days as a French colony. Thus, while French President Macron visited the site of the Beirut blast, many local politicians avoided doing so.

While he visited the Beirut port, the French President was greeted by protesters shouting “revolution”. And as he walked through a Christian area in Beirut, some people shouted- “Mr. Macron, free us from Hezbollah.”

Hezbollah has been fighting for political dominance in Lebanon. The Lebanese have been the biggest victims. In 2006, for example, Hezbollah captured 2 Israeli soldiers that led to a bloody 34-day war resulting in 1,200 Lebanese casualties. Then in May 2008, clashes between Hezbollah militants and government supporters left 100 dead.

Currently, Hezbollah has been controlling Lebanon’s political fortunes. In October 2016, Hezbollah-backed candidate became the President, and then in May 2018, Hezbollah dominated the legislative elections. However, protests have been happening in Lebanon since September last. But earlier they railed against austerity measures, corruption and poor infrastructure. The protests after the Beirut blasts too are anti-government but they are now more anti-Hezbollah than anti-government.

Iran and Palestine are the ultimate losers of a Lebanon without Hezbollah. Iran loses out on a major proxy militia that has been the bulwark of its presence in the Middle East for several decades. On the other hand, Palestinian cause becomes even weaker than it already was. The Lebanese protests are therefore bound to bring Iran and Palestine to their knees.

After insulting Christians with Hagia Sophia move, Erdogan targets Jews as he wants to “liberate” Al-Aqsa mosque in Jerusalem