Taiwan is not intimidated anymore 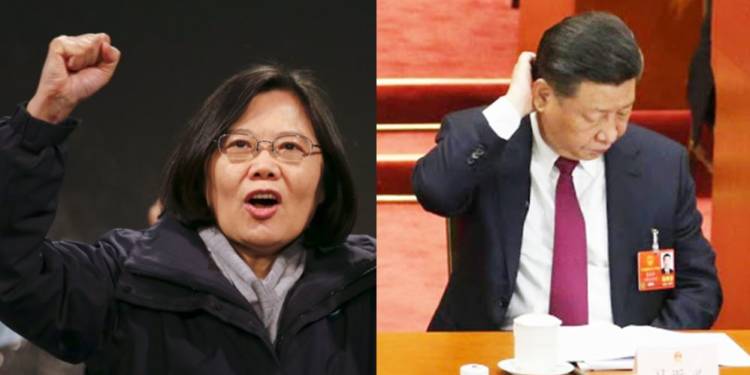 Ever since Tsai Ing-wen assumed the reigns of Taiwan, China is behaving like a jilted lover as its plans of occupying the island country have been scuppered. As Taiwan gains increasing recognition on the back of the country’s successful battle against the Wuhan coronavirus pandemic, the USA in a significant move dispatched a high level delegation led by Health Secretary Alex Azar to Taiwan, much to the chagrin of China. In a blatant attempt to undermine Taiwan’s sovereignty, China sent its fighter jets to crossover into Taiwan’s airspace as Azar met Tsai at the Presidential Palace, seeking to scare Taiwan. Taiwan refused to cower down and instead reacted strongly as it locked its surface missile systems on the Chinese fighter jets forcing them to quickly run back to China.

In yet another instance of Chinese provocation, two Chinese warplanes, Shenyang J-11 and a Chengdu J-10 crossed the Taiwanese median line around 9 AM as US Health Secretary Alez Azar met Tsai Ing-Wen at the Presidential Palace on Monday.

Taiwan quickly activated its patrol planes and its air defense missiles forcing the Chinese warplanes to meekly return to China. China was enraged as a high level US delegation visited Taiwan to convert President Trump’s support to the island country. China had promised retaliation and in its desperate attempt to coerce Taiwan, it ended up making a fool of itself.

State-run Global Times has already labelled Azar’s visit to the island country as a “serious provocation” and the calculated move to undermine Taiwan’s sovereignty ended up backfiring as the Chinese fighter jets were being tracked right from their take off, and subsequently intercepted by the Taiwanese jets and forced out with the Chinese warplanes running the risk of being annihilated as Taiwan had also activated its missile systems.

The country’s defence ministry announced, “In addition to broadcasting a warning, our reconnaissance and patrol aircraft were in full control throughout the course and drove the [Chinese] fighter jets out of our air space.”

Chinese provocations have only increased as Taiwan gets increasing diplomatic recognition in the wake of the China made pandemic. Recently, a Chinese oil tanker illegally entered into Taiwanese waters with the Taiwan government wasting no time to detain the tanker and immediately arrested the six-member crew.

In its devious plans to intimidate and eventually occupy Taiwan, China has been planning large-scale simulated invasion as China has been steadily increasing its presence in the disputed water of South China Sea. Taiwan has refused to be intimidated and hence has sent a marine company to reinforce the garrison on a small outpost in the South China Sea. A company of around 200 Marines has been sent to the Pratas Islands to support the coastguard as intel reports revealed that China was planning a simulated attack on the islets.

Taiwan has also started flying its F-16A Vipers which are armed with live AGM-8 Harpoon anti-ship missiles in the wake of increasing Chinese military exercises to capture Taiwan.

The series of events further prove that the island nation is more than ready to give a befitting reply to any Chinese misadventure as it is determined to protect its territory from the dragon.