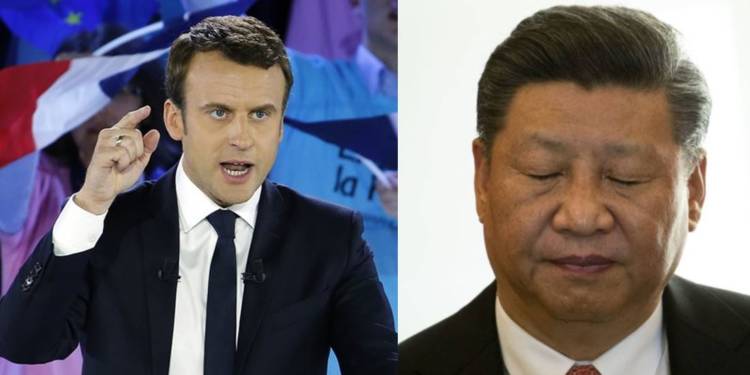 The humongous Beirut blast in Lebanon is having long-term political repercussions- the biggest of them all being the downfall of the Hassan Diab government, which was backed by Iran-sponsored terror group Hezbollah. Lebanese Prime Minister Diab actually gave in to the vociferous protests across the country targeted at Hezbollah and the ousted government.

The downfall of the Hezbollah-backed government has also come as a bolt from the blue for China, which had found an ally in Hezbollah within Lebanon. But now Hezbollah itself seems to have lost political influence in Beirut. Looking at the grim political situation in Lebanon, French President Emmanuel Macron has jumped in to the scene marginalise the growing Chinese influence in the country.

The blast in Beirut’s port is the driving cause behind the downfall of the Hezbollah-backed government. But make no mistake, Lebanon was in a lot of trouble even from the blasts shook the entire country. Lebanese economy is in deep trouble with rising inflation, a rapidly deteriorating currency and a breakdown of the power sector leading to frequent outages.

Traditionally known as the outpost of Western values in the Middle East, Lebanon failed to secure financial aid from the United States, the oil-rich Arab economies or the International Monetary Fund (IMF). The Hezbollah kept Lebanon away from Western/ IMF aid.

In fact, Hassan Nasrallah, leader of the Iran-sponsored militant group, Hezbollah himself made it clear that he preferred Chinese aid to an IMF bailout. During a televised address last month, Nasrallah said that Lebanon must “Look East” in a reference to Chinese aid.

He added, “Chinese companies are ready to inject money into this country.” The Hezbollah chief argued that Beijing’s aid could be more effective than a 10 billion US dollars IMF aid.

Moreover, the political and financial elite of Lebanon developed cold feet on political and economic reforms which include halting corruption, austerity measures and restricting debt-ridden banks in order to secure an IMF bailout.

As for the US, a war of words ensued. While the outgoing Hezbollah-backed government blamed Washington for stopping the flow of dollars into the cash-strapped economy, the US argued that Hezbollah hoarded dollars, apart from indulging in large-scale smuggling.

China, on the other hand, promises investments in Lebanon. Beijing’s interests were of course guided by the Belt and Road Initiative (BRI). Beijing was looking to build power stations, an ambitious tunnel connecting Lebanese Capital, Beirut to the Bekaa Valley in the Eastern part of the country and a rail line along the Lebanese coast. Lebanon was poised to become yet another victim of Chinese debt-traps by gaining favour with an influential Hezbollah.

However, China will now have to give up its ambitions in Lebanon. After Beirut plunged into a crisis due to a massive blast at a port believed to be used and controlled by Hezbollah, a political vacuum has been created in the Middle East country. France, and not China is filling this vacuum now, which means Beijing stands marginalised.

After the Beirut blast, French President Emmanuel Macron has emerged as the most popular face in the country. Macron is the only political leader to have visited the Beirut port blast site, even though local leaders stayed at bay.

Macron assuaged the distraught crowds across Beirut, promised to reconstruct the city and assured the Lebanese people that France relates strongly to their pain. The French President said, “France will never let Lebanon go.” He added, “The heart of the French people still beats to the pulse of Beirut.”

Leabenese people are even more forthcoming in their affection for the French President. Desperate Beirut residents praise him for visiting explosion-hit areas of Lebanon’s capital and call Macron their “only hope”.

Wearing a black tie in mourning, Macron was greeted by Lebanese crowds who were chanting “Revolution” and “The people want the fall of the regime.”

Macron’s visit to Lebanon has pumped up anti-Hezbollah, anti-government sentiment in the country. People of Lebanon see a saviour in the French President. More than 50,000 people signed a petition calling upon Macron to take control of Lebanon. When the French President visited a Christian locality, some shouted, “Mr Macron, free us from Hezbollah.”

Paris has past colonial connections with Lebanon. France-Lebanon ties have remained strong after Lebanese Independence in the year 1943. And Lebanon’s estimated 40 per cent Christian population has further kept it close to Paris.

Therefore, Macron’s visit to Lebanon and direct interaction with Lebanese people hasn’t come as a surprise to many. But as per Maximilian Felsch, a professor at Beirut’s Haigazian University this doesn’t amount to post-Colonial interference.

People of Lebanon have strongly sought a French solution. Before the Beirut blast, an Iran-sponsored Hezbollah was strongly pulling Lebanon away from its Western connection but the blast in Beirut’s port has prompted the rise of a new political order which will be much closer to France. Macron himself tweeted, “Lebanon’s future is being decided now, by Lebanon itself, and with its international partners at its side.”

Lebanon's future is being decided now, by Lebanon itself, and with its international partners at its side.

Chinese influence in Lebanon was dependent on Hezbollah, but Hezbollah itself stands to lose out. A new Lebanese government will be pro-France and much closer to the Western world, including the US. Macron has thus swept Lebanon off China’s feet.