As US leaves, China has plans to loot the $3 Trillion Mineral wealth in war ravaged Afghanistan

China's has its eyes on Afghanistan! 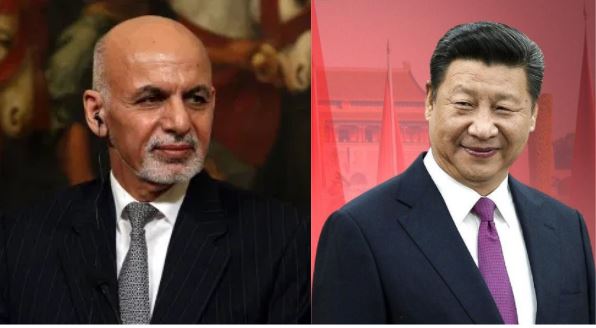 As Trump withdraws American troops from war-ravaged Afghanistan, China’s predatory eyes are turning towards the hordes of mineral wealth worth 3 trillion dollars underneath the ground in Afghanistan. In fact, China is already in process of usurping the war-scarred country. Beijing is said to be secretly in talks with the civilian government of Afghanistan to build its own military base in the country. At the same time, China is also said to have secured an understanding with Taliban leaders not to aggravate the Uighur situation within China’s far-Western Xinjiang province.

The massive Afghan mineral wealth had always been at the top of Chinese agenda. When in 2018, Pakistan-US relations soured due to Islamabad’s support for terror groups that the American military was trying to fight, Washington had announced aid cuts to Pakistan. Chinese President Xi Jinping himself had faced stinging criticism for the investments he made in Afghanistan in the prior years.

Till now, Chinese investments in Afghanistan running into billions of dollars have failed to tap into the country’s mineral wealth primarily because of the longstanding conflicts and violence in the country. But with the US trying to find an exit from Afghanistan, China has found a new path to Afghan wealth.

And China’s tactics are going to be remarkably different from Washington’s Afghanistan strategy. Unlike the imperial policy of sending boots on the ground, China will hedge its bets with both the civilian government and the Taliban by buying influence in the landlocked country. China is also strong-arming Pakistan to pursue its interests with the Taliban in a much better way than the United States.

Beijing generally refrains from getting involved in military engagements beyond its borders. Yet in 2018, Fergana News, a reputed media outlet covering Central Asian developments had reported that according to the Afghan Defence Ministry spokesperson, a new military base of the Afghan Armed Forces would come up in the country’s Northern province of Badakhshan with Chinese support.

China has multiple objects to achieve out of Afghanistan- one of them being to get an understanding against the Uighurs in Xinjiang. China has imposed brutal security measures against Uighurs by lodging them in concentration camps and snatching their passports. Yet Beijing fears that Uighurs might find support and provocation from Islamist elements in Afghanistan and greater Central Asia.

An Afghan Defence Ministry source has told Fergana News, “The Chinese side fears that the Chinese Uyghurs, who are among the terrorists now, can cross the territory of China through Afghanistan and make problems for the Chinese authorities.”

A retired Afghan General further explained that ethnic Uighurs were seen amongst the Taliban regime, who received good training at Al-qaeda camps. China, of course, fears that its 76-kilometres border with Afghanistan on the far West could provoke militancy in Xinjiang.

By financing a military base in Afghanistan, China is dropping hints to the Afghan civilian government and armed forces. Beijing is suggesting that both Afghanistan and China can benefit out of enhanced cooperation.

But China is also using the Pakistan axis to earn goodwill with Taliban. Beijing knows that Taliban still controls majority of Afghan territory and Kabul’s future also hangs in balance. Therefore, China cannot put all its eggs in one basket and wants to position itself comfortably on both sides.

Deals with Taliban cannot be out in the open, and thus China is using Pakistan as a client state for cutting a ‘behind the curtains’ deal with Taliban. US News has reported that China and Pakistan have started an intelligence sharing mechanism to augment Beijing’s influence in the war-ravaged country at the expense of the United States.

Islamabad and Beijing have reportedly managed to convince the Taliban leadership not to provide safe havens or support to the Uighur Muslims from China-occupied Xinjiang entering Afghanistan. Both Chinese and Pakistani governments, of course, remain silent about the secret deal. But China’s success curry favour with Taliban are rather unprecedented.

The US itself, for example, has never been able to use the Afghan intelligence network to obtain an assurance about Al-Qaeda, the enemy-in-chief of American interests in Afghanistan. And while Taliban has repeatedly made it clear that it has nothing to do with Pakistan’s Kashmir agenda, it has never really refused to provide safe havens to Kashmir-focussed Jihadist-terror groups like Lashkar-e-Taiba (LeT) and Jaish-e-Mohammed (JeM).

China wants to become the principal regional force by gaining favour with both the Afghan civilian government and the Taliban. Vikram Singh, a former top official at the Pentagon for South and Southeast Asian affairs said, “If the Chinese are bringing Pakistan more ‘behind the curtain,’ in terms of intelligence and military cooperation, it will be tailored to their common interests like confronting India over territorial disputes.”

Within the American strategic circles, China’s new-found understanding with the Taliban has become a source of worry. US News quoted a US assessment source as saying, “The reality is now dawning within the intelligence community.” The source added, “We are now leaving Afghanistan, but who are we leaving it to?”

Afghanistan’s mineral wealth is the key to its future prospects. But with a belligerent China eyeing these resources and also gaining favour with Afghan political leadership, it is very much possible that Beijing steals Kabul’s prosperous future, enriching itself and putting the war-torn country through still greater misery.

UAE-Israel relations: Trump’s genius, the changing geopolitics of West Asia and the rejection of Palestine