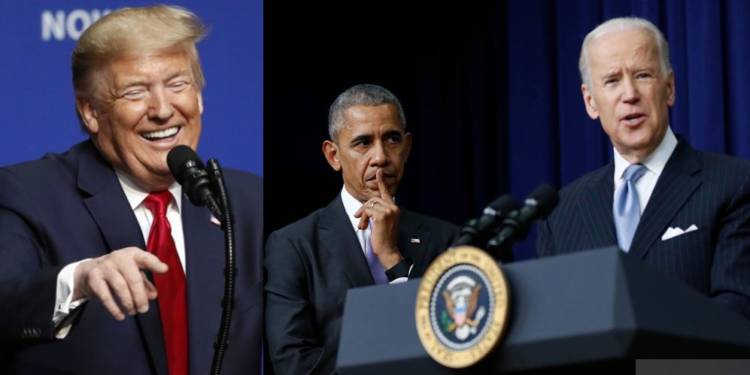 As the race for the US Presidential election heats up, the Democrats yet again present a divided house as the party clearly lacks a well defined strategy to take on President Trump and the Republicans. Ever since Joe Biden won the Democrat ticket after a frantic 72 hours where he miraculously turned the tables on Bernie Sanders, there has been a sense of unease as section in the Democrats continue to remain unconvinced over Biden’s ability to defeat Trump. In a sensational revelation, Obama is skeptical about Biden as he has privately voiced concerns over Biden’s leadership to his trusted aides.

The Obama administration had one of the best PR in recent history, with the bromance between Obama and his Vice President Joe Biden often hogging all the limelight. Turns out it is not hunky dory between Obama and Biden with the former President laying bare his concerns over Biden’s abilities.

Politico reports that President Obama during this year’s Democrat primaries privately admitted to an unnamed Democrat that, “Don’t underestimate Joe’s ability to f–k things up.”

It is important to note that Obama chose not to endorse any candidate during the Primaries and has only recently endorsed Biden for his Presidential campaign. Obama’s major concern over Biden is that he feels that the latter does not have an intimate connection with the electorate.

“And you know who really doesn’t have it? Joe Biden,” confessed Obama to another Democratic Party candidate during the primary run clearly hinting at Biden’s lack of an intimate bond with the Iowa electorate.

Biden on his part is also miffed with Obama as he has lamented to his colleagues that Obama failed to “lift a finger” to help him win the South Carolina primary. Biden felt since Obama didn’t come out and support him, he himself had to go out and win the support of the black voters.

“[Biden] did feel that he needed to go out and earn it himself, as opposed to having people see it as an extension of a third Obama term or having it be any kind of referendum directly on Obama,” said a Biden adviser, Anita Dunn.

The cracks between Obama and Biden have been there ever since Obama endorsed Hillary Clinton for the 2016 election. Almost the entire team of Obama joined Hillary in her failed campaign to become the first woman President in the history of America. Obama while endorsing Hillary in 2016 had said, “I don’t think there’s ever been someone so qualified to hold this office.”

Compare that to Obama’s endorsement of Biden this year as he said, “I believe Joe has all of the qualities we need in a president right now … and I know he will surround himself with good people.” Obama’s statement feels like a half-hearted endorsement and doesn’t give the fence sitters any confidence in Biden’s leadership.

Despite the PR telling us a different story, officials during the Obama administration used to treat Biden dismissively. In his memoir, Ben Rhodes, Obama’s deputy national security adviser wrote, “In the Situation Room, Biden could be something of an unguided missile.”

Former FBI Director James Comey in his book claimed that, Obama would have a series of exchanges heading a conversation very clearly and crisply in Direction A. Then, at some point, Biden would jump in with, “Can I ask something, Mr. President? Obama would politely agree, but something in his expression suggested he knew full well that for the next five or 10 minutes we would all be heading in Direction Z. After listening and patiently waiting, President Obama would then bring the conversation back on course.”

Obama knows Joe Biden better than anyone else thanks to their 8 year stint at the Oval Office. Perhaps that’s why Obama discouraged Biden from fighting the 2016 elections and is only half-heartedly endorsing him as he is left with no option.

Unlike Bernie Sanders or Hillary Clinton to an extent, Biden doesn’t have a dedicated following due to his lack of charisma and connect with the voters. The 77-year-old leader has serious health concerns as over the course of his campaign, Biden has committed various gaffes and appeared to lose his chain go thought mid way through his address.

Biden’s Presidential campaign is lazy and lacks any comprehensive plan or a strategy to defeat Donald Trump who is appearing to be far more energetic and knows the pulse of his electorate. The Democrats are using all their power to avoid the three debates with Trump under the garb of Coronavirus as they know more the public exposure of Biden, lesser the chances of him winning the election.

As things stand, Trump has a far superior hold over his electorate and just needs an internet connection to connect with his voter base and capture their imagination. Biden and the Democrats are characteristically overconfident and lazy, and Obama perhaps appears to have conceded the election to Trump or perhaps is opening a backdoor for his closest aide Hillary Clinton.