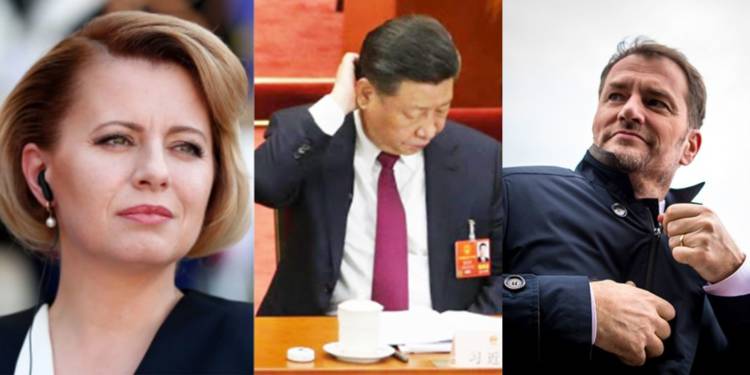 China’s diplomatic heft in the European Continent is going downhill despite the close ties between the Brussels-based European Union and the Chinese Communist Party (CCP). Notwithstanding, German Chancellor Angela Merkel’s de facto EU leadership and her ambitions to forge close trading relations with Beijing, even the smaller countries like Slovakia have started to speak up against the Chinese belligerence.

Over the past three months or so, Slovakia has stood up firmly against Chinese belligerence. The Central European country has raised contentious issues like calling upon Beijing to release the Panchen Lama- the second-highest-ranking monk in Tibetan Buddhist tradition, Taiwan’s inclusion in the WHO, the brutal imposition of the draconian National Security Law in Hong Kong and the Chinese disinformation war in wake of the COVID-19 Pandemic.

Traditionally, Slovakia has been pro-China. Since 2006, the Social Democracy party was in power and the ruling party did not concern itself with security or human rights issues associated with China. However, things have changed this year- Social Democrats were shown the door during the February 29 elections and a coalition of right-of-centre parties were voted to power.

The right-of-centre parties tend to make a more values-based assessment of China, which is why Slovakia is witnessing a sudden upsurge of sentiment against a Communist China. Therefore, the new government led by Igor Matovic has altogether snubbed China.

Anti-China sentiments started building up in May itself when the Slovak Defence Ministry published a report titled “Infodemic” mentioning both Russia and China for spreading COVID-19 related disinformation. At around the same time, the Slovak cybersecurity portal Infosecurity.sk also noted that “The Chinese embassy in Slovakia has started an information offensive.”

The Slovak assessment of a Chinese information offensive was triggered by the Chinese Embassy’s setting up of a Facebook page in February. The Chinese Embassy in Bratislava, Slovakia actively used Twitter and Facebook to spread lies like “there are no wet markets with wild animals in China” or that Chinese whistleblower-doctors were not punished, but rewarded for their efforts.

Many within Slovakia believe that this is a part of China’s worldwide attempts to revamp its image. But MEP (Member of European Parliament), Victor Breiner thinks this is more serious. He said, “They (China) want to popularize conflicting narratives and criticize the current ones presented by the foreign minister or the minister of defence. That is basically their enemy.” He also suggested that Chinese disinformation efforts should be addressed in Slovakia’s new security strategy.

In the month of May itself, a group of 22 Slovak lawmakers, including two Deputy Speakers of the Slovak Parliament, also issued a joint statement condemning the illegal detention of the Panchen Lama by China. The statement read, “It is a tragic milestone evincing the continuous crime being perpetrated by China not only against Gedhun Choekyi Nyima and his family but also against all the Tibetans.”

The Slovak lawmakers also noted that China is persecuting people of faith including the Tibetan Buddhists, Uyghur Muslims and Christians.

Slovak Parliamentarians have also backed Taiwan’s accession to the World Health Organisation (WHO). On the issue of Hong Kong, last British Hong Kong Governor, Lord Patten had issued a statement on May 24 decrying ‘flagrant breach of the Sino-British Joint Declaration’ by China. As of date, 27 Slovak lawmakers had signed the statement. Slovak lawmakers constitute the second largest group of signatories, next only to the British legislators themselves.

The initiative taken by the Slovak legislators had permeated into the executive as well. In June, Slovakia signed a cross-regional statement on Xinjiang and Hong Kong was delivered to the UN by UK’s Ambassador to the WTO and UN in Geneva, Julian Braithwaite on the behalf of 27 countries.

In fact, the new Slovak government led by Igor Matovic, developed a cold feet about China from the word go. While the previous Prime Minister Peter Pellegrini and Interior Minister Denisa Sakova helped China’s disinformation campaign with their photos of receiving Chinese medical assistance spreading like wildfire, the present government has made no public appearances praising Chinese assistance.

Matej Simalcik, Executive Director of the Central European Institute for Asian Studies, CEIAS said, “They understood that welcoming these cargos at the airport helped China the most.” Matovic has rubbished Chinese health supplies. Early into his term as the Slovak Prime Minister, Matovic claimed that 1, 00,000 Chinese testing kits purchased by the previous government were ineffective and useless. He said, “These tests won‘t help us.”

Matovic has therefore successfully pulled Slovakia out of China’s grip. Slovakia itself is becoming an example of how to take on Chinese disinformation campaigns and belligerence. Smaller countries like Slovakia that stand for human rights and democratic values are therefore taking an anti-China stand even if it comes at the cost of antagonising a Germany-led European Union.