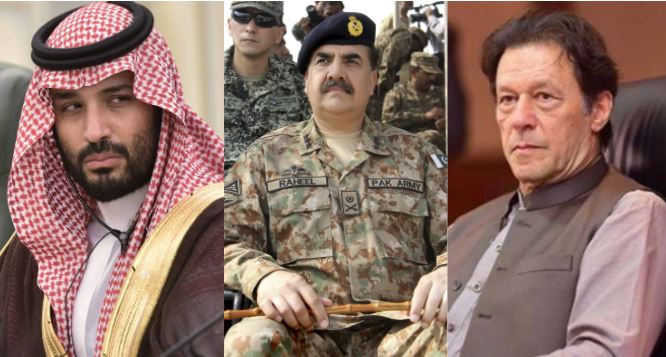 Pakistan is staring at an imminent coup, and while on most occasions the country’s 111th infantry brigade, also called the ‘Coup Brigade’ of Pakistan marches on the roads of Islamabad to oust a civilian government, this time around, the intricate details of the same are being scripted in Saudi Arabia and the Gulf. Also, a coup this time around is likely to be executed by the current Pakistani Chief of Army Staff, General Qamar Javed Bajwa to install his predecessor – General Raheel Sharif as the leader of the country.

According to reports, General Raheel Sharif is being excessively persuaded by the Gulf countries, including Saudi Arabia, to enter politics in Pakistan and take greater responsibility upon him. Saudi Arabia has had enough of Pakistan’s buffoonery and is irritated enough with the Imran Khan’s dispensation and rather explicitly plots its ousting from Islamabad. The reports of General Raheel Sharif replacing Imran Khan have led to positive speculation on whatever Pakistan calls its social media, and the people are confidently claiming to cite media reports that Khan’s days in office are now numbered.

The news of General Raheel Sharif joining politics and possibly replacing Imran Khan as Prime Minister comes at a time of heightened bilateral tensions between Pakistan and other Gulf nations over a multiplicity of factors, the primary of them being Pakistan’s unending obsession with India’s Kashmir. Having been repeatedly snubbed by the Saudi-led OIC and other Gulf countries on the issue, Pakistan had gone berserk, with its Foreign Minister threatening Saudi Arabia on live television that his country would have to look toward other “like-minded” Islamic countries for support on its Kashmir rants.

Riyadh was visibly outraged with such comments, as it then took to grandly snub the Pakistani Army Chief while he was on a visit to Saudi along with the ISI chief. The crown prince of Saudi Arabia, Mohammad Bin Salman had even refused to meet General Bajwa owing to his country’s politicians going rogue. With the Islamic countries of the Middle East actively plotting a coup against the Imran Khan Government, and Saudi also making Pakistan economically bleed by stopping oil supplies and asking immediate repayment of loans, Imran Khan has decided to rush his Foreign Minister, Shah Mehmood Qureshi to Beijing today.

Qureshi will be meeting his counterpart, the Chinese foreign minister and state councillor Wang Yi. Discussions linked to belt and road projects, bilateral ties and preparations for President Xi Jinping’s visit to Pakistan expected later this year are on the agenda. Qureshi is also expected to seek support for Pakistan’s stand on Kashmir and discuss the India-China standoff along the LAC in Eastern Ladakh.

Having been snubbed by the Saudis and other Gulf countries, Pakistan has once again turned to its “all-weather” ally – China. However, China is just as much a global pariah, isolated and a rogue country as is Pakistan. Earlier, Imran Khan had melodramatically said, “China is our only friend which has remained politically steadfast with Pakistan during good and bad times.”

Pakistan is refusing to let go of the boring Kashmir bogie which it shamelessly tries to convince the world as a subject which deserves international addressal. Imran Khan, particularly, has abandoned all of the country’s domestic and international issues and is solely focussing on Kashmir. In the process, he is steering Pakistan away from the Saudi and Gulf countries, and towards rogue nations like Turkey, Qatar and China.

General Raheel Sharif, on the other hand, is widely respected by the passive Pakistani populace, who regard him as a man who made lives a bit easier for the common citizens of the country. As such, people expect that he would be focussing on solving domestic issues first, rather than shouting like a maniac about Kashmir alone upon becoming Prime Minister. General Raheel Sharif attacked the “bad terrorists” in Waziristan as soon as he took over as the Chief of Army Staff. After such an offensive, the attacks in North Pakistan were reduced considerably, which led to the man gaining immense popularity in the country.

If the indications are anything to go by, it is only days before the 111th infantry brigade of the Pakistani Army marches down the streets of Islamabad to oust Imran Khan as the Prime Minister.

‘Let’s kick China out of supply chain,’ Japan gets India and Australia as allies in its new front against China