‘Let’s kick China out of supply chain,’ Japan gets India and Australia as allies in its new front against China 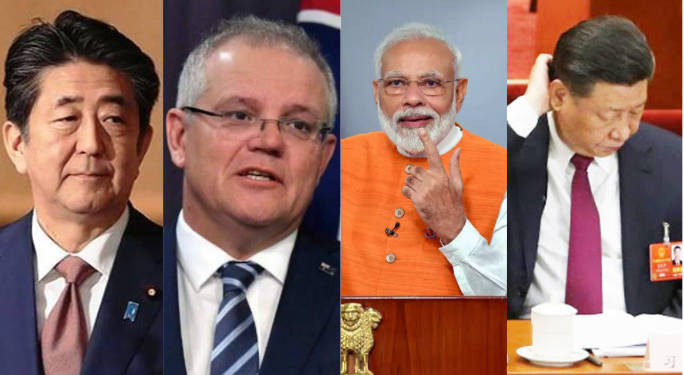 Xi Jinping’s blind expansionist policy is coming back to bite China as the world is in no mood to let China off the hook this time. The past few months have seen India, Australia and Japan taking a decidedly anti-China stance as China’s aggressive behaviour has enraged the trio. The troika understands that China’s strength lies in its standing in the global supply chain and hence, have started taking steps to end China’s dominance. India, Japan and Australia have initiated discussions on launching a trilateral Supply Chain Resilience Initiative (SCRI) to reduce China’s foothold in the global supply chain.

In the backdrop of China’s aggressive political and military posturing, India, Japan and Australia are jointly countering the Chinese challenge as the troika has started deliberations to launch a trilateral Supply Chain Resilience Initiative (SCRI) to reduce the dependency on China. The initiative was first mooted by Japan and is now taking shape, reports the Economic Times.

Japan has pressed on the urgency of the initiative on India with dates being worked out to hold the first meeting of the commerce and trade ministers of the three countries by next week as Tokyo is keen for the initiative to take-off by November.

ET reports that India has shed its non-alignment strategy and is seriously moving on the proposal in the backdrop of the tense border stand-off between India and China. The Indian government is determined to emerge as an alternative to China and hence, it appears to have decided to become a part of the global supply chain.

The main objectives of the initiative are to attract FDI in doves and make the Indo-Pacific region into an “economic powerhouse” by improving the supply chain resilience across the region while building a mutually complementary relationship among the partner countries.
India has been planning to kick China out of the supply chain ever since the Galwan clash. Following the border scuffle, India amended its FDI norms to restrict Chinese investments and has also introduced sops to attract global investors to compete with China and offer itself as an alternative.

The Print has reported that the Modi government is likely to announce the final guidelines for its Production Linked Incentive (PLI) Scheme worth Rs. 6,940 crore, which is meant to augment domestic production of the Active Pharmaceutical Ingredients (API).

The government had approved the PLI Scheme in March, as the government wants to reduce India’s dependence on raw materials from China for the production of crucial antibiotics, anti-HIV drugs, vitamins, and cardio medicines.

The SCRI can emerge as a credible alternative and assuage the concerns of companies and economies that have concerns about the global supply chain that can get derailed due to China’s aggressive political posturing.