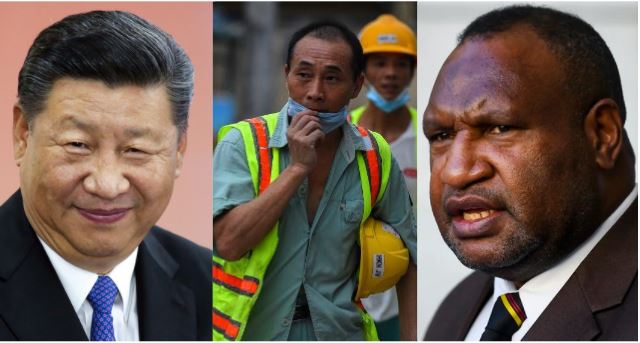 As if one Pandemic wasn’t enough for the world, China has been caught red-handed trying to create a second Chinese virus Pandemic in Papua New Guinea. A Chinese state-owned company, the  China Metallurgical Group Corporation (MCC), which controls a major nickel mine in Papua New Guinea has said that 48 staffers who returned from China earlier this month may test positive for COVID-19 because they have been vaccinated.

The only issue is that no Coronavirus vaccine has been discovered till date. Therefore, it is being believed that China is using workers from State owned companies as lab rats and testing them on foreign soil. On Thursday, China faced some tough questions from Paua New Guinea authorities over the shocking development. As such the vaccine controversy seems to be adding up to the ongoing differences between Beijing and Port Moresby.

A statement from the MMC subsidiary NiCo Ramu stated that any positive Coronavirus vaccine results were “the normal reaction of the vaccination and not due to infection.” The statement further read, “It takes around seven days to produce antibodies in the vaccine recipient’s body after being vaccinated.” It added, “If they need to be tested again for COVID-19, it is suggested to be conducted at least seven days after the vaccination date.”

The outrageous claims made by the Chinese State-owned company has become a flashpoint between China and the island country in the Oceania. Papua New Guinea’s Pandemic tsar David Manning told AFP that he demanded an answer from China and also blocked a Chinese flight carrying 150 workers on board due in Port Moresby.

While demanding an immediate clarification from China, Papua New Guinea’s Pandemic tsar has also made it clear that Papua New Guinea “does not currently acknowledge a vaccine” for the Chinese virus and has no plans to do so unless a vaccine is approved by health regulators. He has also issued a decree prohibiting Coronavirus testing, trials and vaccine treatments without approval within the Island country.

Meanwhile, the Chinese Ambassador to Papua New Guinea is acting just like any other wolf warrior from the Communist State- nonchalantly and irresponsibly. He told AFP, “We don’t have any comments for the moment. However, one thing is for sure, China is not doing (coronavirus) tests here in PNG.”

The small Island country of Papua New Guinea has already given China a cold shoulder. Recently, Papua New Guinea set a great example on how to deal with China’s debt-trap diplomacy. The small island nation- where the infamous Chinese company Huawei had built a National Data Centre with the loan of 53 million dollars from the Export-Import Bank of China – is refusing to pay back the loans as China was using this data centre to spy on the affairs Papua New Guinea.

Timothy Masiu, who handles the Communications as well as the Information Technology ministry in Papua New Guinea accused China of deliberately building a faulty data centre. “If you buy something from a shop and it does not work, you return it and get your money back,” Mr Masiu told The Australian Financial Review, the premier Business daily of Australia. “We are struggling to repay our other debts, why should we repay this loan?” he added.

Anti-China sentiment is on the rise within Papua New Guinea over China’s debt-trap diplomacy and the latest Chinese vaccine controversy might actually prove to be the final straw. Meanwhile, the backlash against China within the Island country is allowing Australia to make deep inroads and kick Beijing out of the Oceania.

It is important to keep in mind that Papua New Guinea has a poor health indrastcyure and till now, Papua New Guinea had dodged the Chinese virus. But it seems that China plans to reduce the country into a playground for testing the efficacy of its substandard vaccine products. While the world tries to battle out of the Pandemic, China is trying to create a new one.

China already does not enjoy a lot of goodwill in Papua New Guinea and the vaccine incident might completely jeopardise Chinese interests in the small Island country. Within this part of the Indo-Pacific therefore Canberra has gained a huge advantage over Beijing.