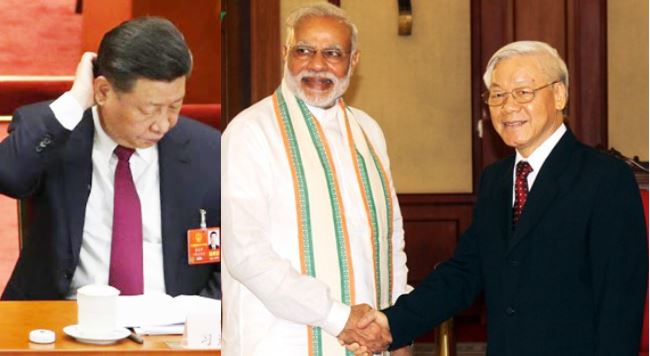 The communist state of the People Republic of China’s madmen ruler Xi Jinping knows no boundaries when it comes to his thirst for expansionism. Beijing is now making fluttering splashes in the sovereign waters of Vietnam and the South-East Asian country has turned to India to help it wade through the menace of China.

According to a report in TOI, Vietnam’s ambassador to India Pham Sanh Chau met Indian foreign secretary Harsh Shringla and briefed him about the deteriorating security situation in the South China Sea (SCS) and asked help from the Indian counterparts.

Although it was described as a routine diplomatic visit but reading through the lines, one can easily decipher that Hanoi wants New Delhi’s help desperately.

The reason Vietnam had to turn to India is that China deployed its H-6J bomber earlier this month to the Woody Island, the largest of the disputed Paracel Islands.

CCP’s mouthpiece termed the movement of the PLA troops to the region as a move to suppress the increasing US military activities in the region.

The Paracel Islands lie over 180 kilometres away from the closest Chinese territory, yet, being the absurd nation that China is, the dragon claims the islands as its own.

Since July 1, China’s military is conducting aggressive exercises in and around these Islands and has cautioned all parties, saying, “during the period (of the exercise), no vessel shall be allowed to navigate (in the large training area and) all vessels have to follow the guidance of the commanding ship on site.”

The Paracel Islands are rightfully claimed by Vietnam, and they are naturally furious with China’s aggressive posturing. Vietnam said that China’s misadventures didn’t just violate its sovereignty but also “jeopardized” the situation in the area.

Secretary of State Mike Pompeo had ruffled some feathers when he in June had announced that American troops were being taken out of Germany to station in the South China Sea to nip in the bud any threat of nefarious China. US Warships have been present in the region and China is on its toes.

Beijing thinks it can bully a small country like Vietnam but with India in its corner, China might want to reconsider its vile manoeuvres.

For a long term solution, Vietnam has sought a greater role for India in exploring oil and gas blocks off its coast in the South China Sea, despite opposition from China, saying that the area falls in its exclusive economic zone.

If India indeed takes up this proposal then the authoritarian regime of Xi Jinping will be dealt a huge blow. The sole reason China undertakes such encroachment drives in the South China Sea is because of its rich, hydrocarbon landed seabed. China has over-exploited the resources in its country and now wants to gobble up other country’s natural resources.

While Vietnam has turned towards India to drag it out of the mess China has created in the region— the Philippines, another country in the vicinity of the Paracel Island has assumed a much firmer stance.

Reported by TFI earlier, Teodoro Locsin, theForeign Secretary of Philippines had issued a warning to Beijing when he released a statement that read:

“Should the exercises spill over to Philippine territory, then China is forewarned that it will be met with the severest response, diplomatic and whatever else is appropriate.”

Late last month, In the 36th ASEAN summit held in Hanoi, Vietnam, the leaders of Vietnam and the Philippines sent a tough message against the “bullying behaviour” of China. They argued that some rogue nations, which do not abide by international rules, has increased activity in the South China Sea.

India and its Andaman & Nicobar Islands strategy to choke China

China’s agitation in the region is palpable because India along with Japan, Australia and the USA is tightening the noose around its hegemony in the area.

India has signed a Mutual Logistics Support Agreement under which both countries can use each other military bases for much efficient patrolling of the Indo-Pacific region. The recent naval exercise by the Quad in the region had further sent shudders across the politburo of Beijing.

To further pile on China’s misery, India has started militarizing the strategically important Andaman & Nicobar Islands in the Bay of Bengal to create a chokepoint for China which is eyeing the ‘Strait of Malacca” with deceitful intentions.

The Union government has provided Rs 5,650 crores to develop military infrastructure in the region. As a result, the naval air stations INS Kohassa in Shibpur and INS Baaz in Campbell Bay are reportedly having their runways extended.

PM Narendra Modi took the plans of militarizing a notch above when he announced that India is considering to investing Rs. 10,000 crore for building a trans-shipment port in the Great Nicobar Islands.

Militarising Andaman and the Nicobar Islands has sent a stern message to China that if it tries to move through the Northwest of the Strait of Malacca then New Delhi will be tracking its every single step.

80 per cent of China’s oil supplies pass through the South China Sea via the Strait of Malacca, and growing Indian presence in its very close proximity can easily hamper China’s hydrocarbons supply from the Middle East bringing the Middle Kingdom to its knees.

Vietnam has seen how India has handled China on the LAC and previously in Doklam and consequently it had no iota of doubt when it turned to New Delhi to bail it out.

The Union Government should go two steps ahead and help Vietnam and ultimately show the world that it had metamorphized itself into a superpower.