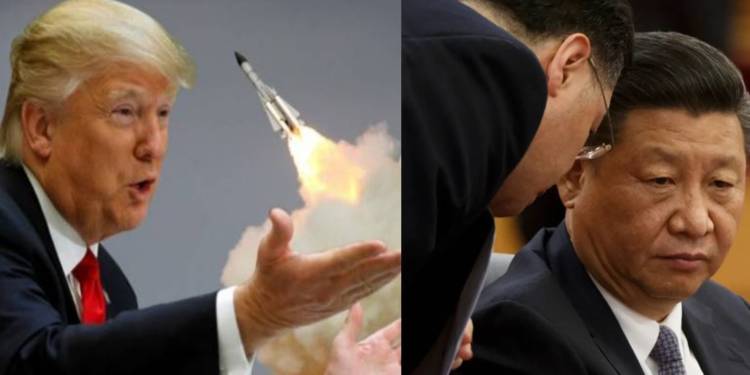 The United States is scaring the living daylights out of China with its plans to deploy Intermediate-range ballistic missiles in China’s backyard in Asia. Beijing’s blood is running cold with fear and therefore, the Chinese Foreign Ministry is threatening the Indo-Pacific countries to avoid hosting Washington’s Intermediate Missiles.

Recently, the US Special Presidential Representative for arms control Marshall Billingslea was quoted as saying that the new mid-range, non-nuclear, ground-launched cruise missile being developed by the US is “exactly the kind of defensive capability that countries such as Japan will want and will need for the future.” Washington’s plans to deploy these lethal weapons has caused a massive meltdown in Beijing’s strategic circles.

According to TASS, Russia’s largest news agency, the Chinese Foreign Ministry has stated, “If the US side goes ahead with its plans (for deploying intermediate-range missiles in the Asia-Pacific Region – TASS), China will take the necessary countermeasures to protect its interests in the field of security.”

Chinese Foreign Ministry spokesperson Zhao Lijian also issued a threat to other Asian countries and said, “China is calling upon the Asia-Pacific countries to realize the real purpose of US actions and their grave effects and to avoid pulling chestnuts out of the fire for others.”

Beijing has once again raised its bogey of a new Cold War and the Chinese Foreign Ministry has also stated, “The US attempt to deploy land-based, medium-range missiles is consistent with its increasing military presence in the Asia Pacific and so-called ‘Indo-Pacific strategy’ over the past years, is a typical demonstration of its Cold War mentality.”

The epic meltdown following the American proposal to deploy the intermediate missiles has also prompted Zhao to say, “We also call on countries in the Asia Pacific region to be soberly aware of the true intention behind and severe consequences of the US move, and refrain from acting as a pawn for the US.”

The Global Times, an extension of the Chinese Foreign Ministry and CCP mouthpiece has also been roped in to scare away Japan from hosting the American intermediate-range missiles. The Global Times report titled, “Deploying aggressive US weapons will damage Japan’s security situation,” also featured a caricature of a Japanese Sumo wrestler struggling to walk a tightrope with the shadow of an Eagle in the backdrop.

The panic in China’s Foreign Ministry is understandable because Beijing has suddenly come to realise that Washington’s move to unilaterally exit the Intermediate-Range Nuclear Forces (INF) Treaty with Russia last year was actually aimed at China and not Moscow.

The INF Treaty was the first arms-control mechanism wherein the US and the erstwhile Soviet Union agreed to completely eliminate their Intermediate-range and short-range land-based missiles that could carry nuclear warheads. When the US pulled out of the Treaty, many believed that the move was aimed at Russia, but now Beijing’s meltdown speaks for itself.

Trump actually doesn’t view Russia as the biggest threat right now. He knows that a sanctions-ravaged Russia is much easier to negotiate with when compared to a gigantic China. Therefore, most of his strategic redeployments are generally aimed at counteracting the growing Chinese threat.

Washington is very smartly surrounding China with its latest weaponry. China itself has been looking to augment its own Nuclear arsenal and looking to increase the number of its Dongfeng-41, Chinese road-mobile Intercontinental Ballistic Missiles (ICBMs) having a range of 12,000-15,000 kilometres, with an aim of targeting the Continental United States.

Since China is augmenting its own Nuclear firepower, the US is planning to deploy ballistic missiles in the region that have a capacity of around 3,000–5,500 km that falls broadly in between an ICMB and a medium-range ballistic missile. As for Beijing, it knows that many countries in the Indo-Pacific might eventually end up hosting the Intermediate-range missiles.

Last year, South Korea and Australia had said that they were not considering the deployment of the American Intermediate-range missiles. But now times have changed and countries like Japan, Australia and South Korea now view China as a potential security threat. They might be a lot more eager to let the US use their soil for countering the Chinese threat from Japan to South Korea, and the South China Sea to Australia.

Ultimately, the American Intermediate-range missiles could also get armed with Nuclear capability once they are deployed in the Indo-Pacific.

China is feeling the real fear of the US weaponizing China’s many conflicts in the Indo-Pacific. Only recently, for example, China had objected to the replacement of old THAAD (Terminal High Altitude Area Defence) interceptor missiles with new ones at the US base in South Korea.

The Trump administration has grown aware of the growing Chinese Nuclear threat and is, therefore, looking to base its strategic weaponry in China’s backyard. Beijing is, therefore, panicking in fear as Washington starts building a new Asian military policy of sorts.