Middle Eastern Caravan of Trump: His predecessors ravaged the land. He is restoring it 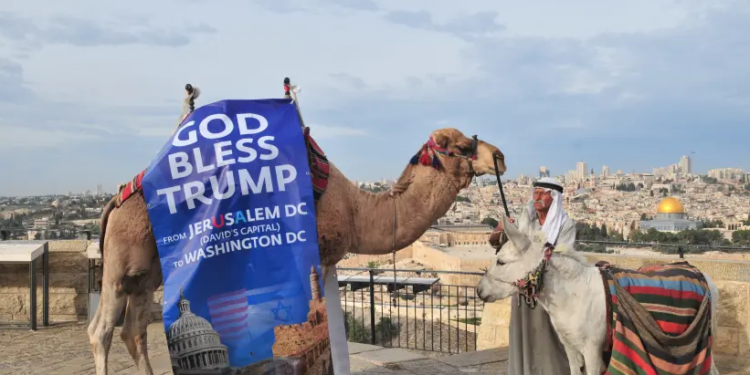 Trump is the first American President in ages who has departed from the White House policy of military intervention and regime change wars in the Middle East. While his past two predecessors ended their Presidential terms with war-torn countries like Libya, Iraq and Syria, Trump is going to end his first term with fewer troops in West Asia and the UAE-Israel Abraham Accord that makes the region much more peaceful than it ever was in recent memory.

Since the US-led invasion of Iraq in 2003, the American policy in the Middle East had only gone from bad to worse. Hilary Clinton, Trump’s rival during the 2016 Presidential polls, had also voted in favour of George W. Bush administration’s decision to use military force in Iraq and bring down Saddam Hussein.

Such interventions, of course, do not help the Middle East or the US. Washington, for example, could not gain a foothold in the country despite the assassination of Saddam Hussein. Similarly, the Obama administration’s decision in favour of military intervention in Libya on Clinton’s insistence in 2011 has led to a fractured Libyan polity that remains embroiled in conflict and wars till date.

Obama’s Syria strategy of ousting Bashar al-Assad and hasty withdrawal of troops from Iraq despite Bush’s warning against a precipitous exit created a void that was eventually filled with the likes of the ISIS that gripped both Iraq and Syria. It took Donald Trump to correct the gross policy errors that his predecessors were making.

Trump started speaking up against the Democrats’ interventionist policy when he campaigning for 2016 Presidential polls. Trump criticised the military interventions in Iraq and Libya. He had said, “I mean, look at Libya. Look at Iraq. Iraq used to be no terrorists. He (Hussein) would kill the terrorists immediately, which is like now it’s the Harvard of terrorism.”

Trump also said, “If you look at Iraq from years ago, I’m not saying he was a nice guy, he was a horrible guy, but it was a lot better than it is right now. Right now, Iraq is a training ground for terrorists.”

Throughout his tenure of four years, Trump has stood up to his promise of not harming American interests and bringing the men back home. He has ensured the withdrawal of troops from Syria, including the Kurdish-held areas and Afghanistan after making a deal with the regional powers to ensure that American interests go unharmed.

Similarly, the US has refrained from dictating terms in the Yemen war and has rather allowed Saudi Arabia and the UAE to deal with the Iran-backed Houthi rebels in the war-ravaged country. Trump’s priorities are clear- he doesn’t want the US military troops to continue spending the bulk of their lives in military barracks far away from the United States of America.

And then, of course, the White House has been able to broker a historic peace deal between Israel and the UAE for “full normalisation of relations” between the two countries. The peace deal has effectively ended the Arab-Israel conflict by making Palestine a secondary issue and ending one of the most contentious issues that have kept the Middle East on the boil for decades.

Now, other Arab/ Arab-majority nations like Sudan, Lebanon and Bahrain could sign similar peace deals with Israel, Washington’s closest ally in the region. The fact that Arab countries are giving Trump such a major foreign policy win ahead of the November 3 Presidential polls makes it clear that they want Trump to stay in power because he has driven the Middle East towards peace and prosperity.

Trump himself is ready to reward Arab countries for making peace with Israel. The UAE is getting American F-35 fighter jets and Lebanon would get economic aid. Other countries also get to be in the good books of the White House.

The US President is therefore not only pulling American troops out of the Middle East but also persuading the regional powers to end their decades-old conflict. Trump should, therefore, come back for a second term in power, for the Middle East to remain peaceful.

Now that a bigger bully is in town, China wants everyone to play by the rules in South China Sea