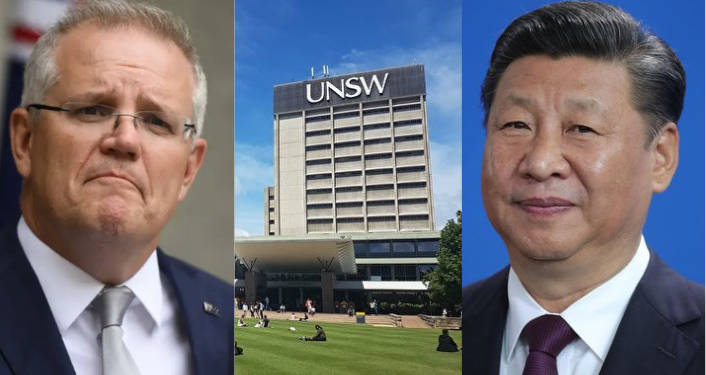 China cannot stop behaving like a dacoit-State, one that sends spies into the academic circles and varsities of the free world robbing them of their intellectual property and research funded by taxpayers. After the Trump administration arrested several Chinese spies in the US masquerading as research scholars, the spotlight has shifted to Australia.

China is using its Thousand Talents Plan (TTP) — a CCP initiative to recruit some of the best and brightest science and technology experts around the world, for zeroing in on some of the best brains in Australia’s academic circles. The CCP is constantly trying to access technological advancements and innovations taking place in Australia on Australian taxpayers’ money. The robbed technological know-how is being essentially used by Beijing for military and economic gains under Xi Jinping’s civil-military fusion.

Beijing often weaponizes the dependence of Australian Universities on Chinese students. Take the example of Drew Pavlou, a student activist who organised an on-campus pro-Hong Kong rally last year and has also been critical of University of Queensland’s links to Chinese government bodies. He was recently suspended by the University for two years.

Similarly, Chinese students went up in protest recently, forcing the University of New South Wales (NSW) to remove a tweet quoting a Director of Human Rights Watch that was China’s human rights abuses. Vice-Chancellor of the University, Professor Ian Jacobs, has now apologised for his University deleting the said tweet.

Chinese student groups have been a strong influence on the University campuses in Australia and they have the direct backing of the CCP and China’s Foreign Ministry. This has allowed Beijing to make deep inroads into the top Australian research scholars, professors and academicians, which are now being exploited for illegitimate military gains.

Security experts remain concerned because they feel that China has started using the TTP to buy out technology and inventions paid for by the Australian taxpayers. Australian Strategic Policy Institute analyst Alex Joske published a report titled The China Defence Universities Tracker. According to the said report, China’s Nuclear Weapons Agency too is recruiting overseas talent through the TTP.

According to a report published by The Australian, China recruits scientists/ academicians through their colleagues, seniors or even LinkedIn. The TTP is too hard a temptation to resist- Beijing offers a second-salary of more than 1,50,000 US dollars per annum, along with hefty research funds. All this comes on top of the money that academicians already make in their home Universities.

Of course, China wouldn’t use every single academician/ Professor recruited through TTP for illegitimate military gains. Some academicians are chosen for TTP without any secrecy and many of those who get to participate with the consent of their Universities are proud of their association with the Chinese programme.

But then several academicians do not disclose their TTP affiliation to their home Universities, nor do they make their surreptitious Chinese association public.

In fact, in some cases, TTP contracts even bar the hired academicians from disclosing their participation to their very own governments. The Australian reports that these academicians keep working full-time for their Australian Universities and make frequent trips to China under the concerned Thousand Talent Plan.

Such academicians continue to rely on Australian grants and thus new inventions funded by Australian taxpayers end up in CCP hands, often getting patented in China. China could use these technological advancements for commercial gains, or even worse, for military/ Nuclear weapons purposes.

Executive Director of the Australian Strategic Policy Institute Peter Jennings said, “A lot of this work is essentially being militarised by Ji Xinping, taking the work of Chinese institutions and applying it to the interest of the PLA and China’s intelligence services so what was perhaps acceptable in the 90s and early 2000s now becomes a big strategic problem in the 2020s because of how China is treating those researchers and using that information.”

TTP remains dangerous for the free world, as the CCP has also used it for stealing the American Intellectual Property (IP). FBI Director Christopher Wray described it as “economic espionage”.

This is rather dangerous at a time when China and Australia have emerged as sworn enemies of each other. China has been trying to punish Australia by imposing reckless tariffs on Australian meat and barley and exploiting its influence in Australian political circles, power sector infrastructure and even water resources.

Australian PM Scott Morrison himself considers China a strategic threat and is looking to bolster his country’s military firepower with a 40 per cent hike in defence budget which will involve hypersonic weapons, anti-ship cruise missiles and submarines. However, the CCP could use TTP to steal the defence upgrades that Australia will be making.

The level of secrecy involved with the TTP makes it doubly dangerous. When academicians themselves do not disclose their association with the Chinese Plan, the Australian Universities and the Scott Morrison government will have a hard time when it comes to insulating Australian academic circles from China.

China is thus stealing Australian tech innovations like a dacoit and Scott Morrison must crackdown before it gets too late.

Now that a bigger bully is in town, China wants everyone to play by the rules in South China Sea