That’s out of the park 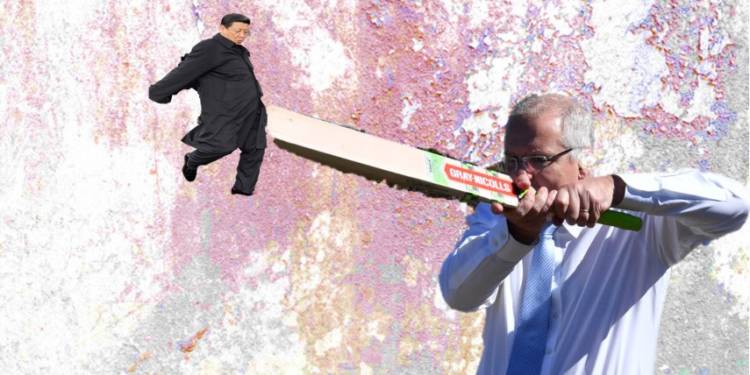 Australian Prime Minister Scott Morrison is taking the China challenge head on. The Scott Morrison government has announced that it is bringing a Foreign Relations Bill, which would give Australia’s Federal government the power to review, prevent or terminate all agreements signed by the State and Territory governments, Local Councils and even Public Universities with foreign governments.

This legislative move is targeted directly at the Australian state of Victoria’s $107 billion BRI project Memorandum of Understanding (MoU) with China signed last year. But the effect of the legislation will go far beyond Victoria. Morrison is trying to weed out Chinese influence throughout his country from State/Territory governments to Universities and even Local bodies.

BREAKING – the Australian government announces it is legislating new powers to review and cancel agreements that state and territory governments, local councils and public universities make with foreign governments. Likely to spell the end of Victoria's BRI MoU with China. pic.twitter.com/YYqD9Q7QCt

A Media Release from the Office of the Prime Minister of Australia titled, “Ensuring a Consistent Australian Foreign Policy” has stated, “The Morrison Government will introduce new legislation to ensure the arrangements states, territories, councils and universities have with foreign governments are consistent with Australian foreign policy.”

The Media Release also states, “Under the reforms, the Foreign Minister will have the power to review any existing and prospective arrangements between state and territory governments and all foreign governments.” It adds, “Arrangements that adversely affect Australia’s foreign relations or are inconsistent with our foreign policy could be prevented from proceeding or terminated.”

Finally, the Media Release concludes, “The Morrison Government looks forward to working closely with state and territory governments, councils and universities and providing all Australians with the certainty that all levels of government are aligned to ensure a consistent approach to managing Australia’s foreign relations.”

Scott Morrison has thus admittedly taken the Australian Foreign policy completely in his own hands. Till now, the Australian State/Territory governments were free to enter into foreign arrangements “without having to inform the Commonwealth.” And China has exploited this system unapologetically, a case in point being the state of Victoria.

Ever since, Australia started confronting the Chinese authoritarianism, there were demands within the country that Victoria should scrap the BRI project that it had signed with Beijing. But the Victorian Premier Daniel Andrews has been reluctant despite his own party’s (Labour) opposition to the BRI. Andrews still supports the Chinese infrastructure project claiming that Victoria will be able to attract Foreign Direct Investment (FDI).

Another Chinese infrastructure project which the Morrison government wants to get rid of is the Darwin port located in the Northern Territory. In 2015, the Northern Territory government had decided to lease the Darwin Port to a Chinese company for 99 years. This was a strategic blunder given that the Communist Party of China (CCP) now dubs it as a part of the controversial and expansionist Belt and Road Initiative.

The port is strategically located on the southern flank of the US operations in the Pacific in close vicinity to Southeast Asian nations like Indonesia. This has repercussions on the potential flashpoints between Beijing and Washington in the South China Sea. Darwin is Asia’s gateway to Australia, which is the reason why the United States felt “blind-sided” by its ally Australia.

Today, the Opposition Labor Party is in power in Northern Territory and according to Australian media reports, Michael Gunner– a Labor leader and the Chief Minister of Northern Territory is unwilling to buy back the Darwin Port from China.

Chinese influence runs deep in Australia’s political circles and there are certain voices that remain sympathetic to the Communist-authoritarian nation. Recently, Labor MP and the shadow Agricultural Minister, Joel Fitzgibbon questioned Australia’s diplomatic offensive against China. Fitzgibbon said, “Of course, we need an inquiry but the way in which our Prime Minister went about that was offensive to the Chinese. They did believe they were being targeted.”

And not just the Australian political circles or state governments, the Chinese influence also runs deep into Australia’s academic circles. Chinese students account for more than 10 per cent of the total revenue at many Australian Universities, and more than 20 per cent at the University of Sydney and UNSW.

However, now Morrison is looking to give the final fatal blow to China down under with the Foreign Relations Bill. He is fighting a strategic and ideological battle with China, and the Australian PM will not let China export its authoritarian characteristics to the democratic Commonwealth of Australia.

Therefore, any Australian agreement with a foreign power, particularly China, becomes subject to the scrutiny of the Australian Foreign Ministry and Federal government. Chinese influence in Australia is soon going to become a thing of the past.