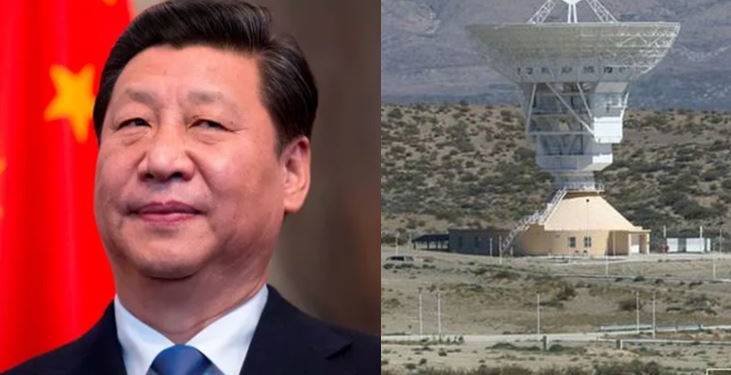 The People Republic of China and its pugnaciousness knows no boundaries and now the South American country of Argentina is worried that the authoritarian regime of Xi Jinping has built an espionage centre in its backyard.

According to a report in Express, Beijing has built a powerful 16-story antenna in the Patagonian region of the South American country. The space centre has been in operation since April 2019 and 30 employees live and work on the site. All of the employees are Chinese and no local or that matter any Argentinian is involved in the daily day-to-day operations of the facility.

However, this is where things start to get interesting when Argentina agreed to let China build the facility. It had asked the station to be of civilian purposes only, but, the 500-acre Patagonian deep space station now sits behind an eight-foot barbed wire fence, and visits to the facility are by appointment only.

The Patagonian station is managed by the China Satellite Launch and Tracking Control General (CLTC), which reports directly to the PLA’s Strategic Support Force. PLA, in layman terms, can be described as Xi Jinping’s private militia which has the sole aim to expedite Xi’s expansionism dreams.

The centre has caused unease among local residents, the Argentine government and Donald Trump’s administration, not least due to the restriction of access, but also because its ties with the Chinese military.

“The Patagonia ground station, agreed to in secret by a corrupt and financially vulnerable government a decade ago is another example of opaque and predatory Chinese dealings that undermine the sovereignty of host nations,” said Garrett Marquis, spokesman for the White House National Security Council.

In 2014, Argentine President Cristina Kirchner’s administration had signed a secretive agreement for China to establish the said facility.

Argentina’s former foreign minister, Susana Malcorra, claimed that the government has no physical oversight of the station’s operations and four years ago she revisited the deal to include a stipulation that it be for civilian use only. But so far, nothing concrete has come out of it as the base remains behind the limit of government and locals.

Chinese president Xi Jinping’s government insists the programme is for “peaceful purposes” and its foreign ministry stressed that the Argentine station is for civilian use only and is open to the public.

Among the wilder conspiracy theories doing the rounds amongst the locals is that the base was being used to build a nuclear bomb. While some experts have even said the 35-metre disk could eavesdrop on foreign satellites.

The opaqueness of the station’s operations and the reluctance of Argentine officials to talk about it make it hard to determine who exactly has visited the compound. According to a Reuters report, the last time some journalists toured the facility was in February 2017, months before the opening of the base.

China is losing its favour in the region and if it continues to operate with such imperviousness then it very well might lose this facility in the coming times as the US continues to mount pressure.