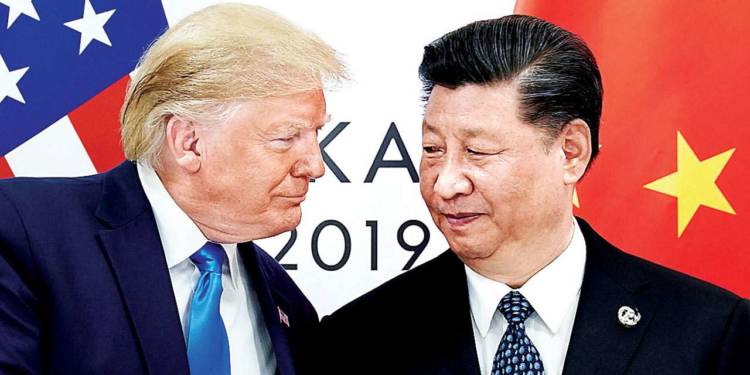 As the US-China rivalry in the South China Sea intensifies, the US President Donald Trump has now started hitting China where it hurts the most- Xi Jinping’s flagship Belt and Road Initiative (BRI). The United States has now started targeting the lifeline of the BRI- the infamous China Communications Construction Company (CCCC), which has a confessed portfolio of 700 projects in more than 100 countries with overseas investments worth 170 billion US dollars.

The latest pushback from the US comes amidst heightened Sino-American tensions in the South China Sea. First, the US spy planes flew into the Chinese airspace for two days in a row during live-fire drills and then Beijing fired four missiles into the contested waterways. Trump has responded by sanctioning 24 Chinese companies for helping China build “military islands in the South China Sea.” These companies include CCCC subsidiaries and the sanctions have caused a severe jolt to Xi Jinping’s BRI.

US Commerce Secretary Wilbur Ross said, “The United States, China’s neighbours, and the international community have rebuked the CCP’s sovereignty claims to the South China Sea and have condemned the building of artificial islands for the Chinese military.”

He further added, “The entities designated today have played a significant role in China’s provocative construction of these artificial islands and must be held accountable.”

The move to impose visa and trade restrictions on the CCCC subsidiaries is a statement of intent from the Trump administration. It is showing how it can cause irreparable damage to Xi Jinping’s BRI- a trillion Dollars project to establish Chinese hegemony in every corner of the world from Latin America to West Asia and Africa, and from Europe to Asia-Pacific.

As such, the CCCC forms the fulcrum of China’s BRI ambitions. It is the largest infrastructure provider in entire China in terms of the contract value. Highways, Expressways, airports, seaports, industrial parks, subways, property development and rail-road projects, the China Communications Construction Company builds everything that you can imagine.

CCCC has a massive global footprint to power its ambitions with a total of 60 subsidiaries and 240 branches, research institutes and service hubs spread across a total of 118 countries and regions. CCCC has a presence in every part of the world, including Europe, the Indian Ocean Region, Southeast Asia, the Middle East and the Americas. It doesn’t, therefore, come as a surprise that the company holds a major portion of the trillion-Dollar BRI project.

Now, by sanctioning some of the CCCC subsidiaries, the Trump administration is showing the ample scope that Washington has in hurting Beijing’s global interests by targeting the Beijing-based infrastructure company. The US reserves the right to strategically choose the CCCC subsidiaries involved in BRI projects around the world and sanction them at a breakneck speed.

Moreover, Trump also has a legitimate excuse to banish the CCCC units, as the Infrastructure Company has been “enabling the People’s Republic of China to reclaim and militarize disputed outposts in the South China Sea.”

Meanwhile, ominous signs for the China Communications Construction CO. are also coming from the US Secretary of State Mike Pompeo himself. In a statement, he said, “Today, the Department of State will begin imposing visa restrictions on People’s Republic of China (PRC) individuals responsible for, or complicit in, either the large-scale reclamation, construction, or militarization of disputed outposts in the South China Sea, or the PRC’s use of coercion against Southeast Asian claimants to inhibit their access to offshore resources,”

A senior US State Department official also described the visa restrictions as a “mere start” of what more action the US could take against China for its reclamation work in the disputed South China Sea.

Moreover, it is going to be a cakewalk for Trump to sanction even the CCCC as a whole, even apart from the South China Sea. The gigantic Chinese infrastructure company is rather infamous for several reasons, including fraud, corruption, price collusion and even kickbacks.

CCCC does have a troubled past. In 2009, the World Bank blacklisted it for eight years over allegations of fraudulent bidding practices by the CCCC road-building subsidiary in a Philippines Highway project. In 2009 itself, the same CCCC road-building subsidiary also faced allegations of paying a kickback of 19 million US dollars to the Equitorial Guinea President’s son to win a highway project. It continued to face allegations of corruption and substandard quality in subsequent years in countries like Australia and Malaysia.

Clearly, the China Communications Construction Co. is not the most reputed of conglomerates which is also self-explanatory given that CCCC is a Chinese State-owned infrastructure provider. The Trump administration has thus found a stick to beat Beijing in the form of CCCC. The BRI will be cut to size if the US decides to go for the jugular against this company and it seems that Trump might have already started by weaponizing the Chinese infrastructure giant’s role in militarisation of the South China Sea.