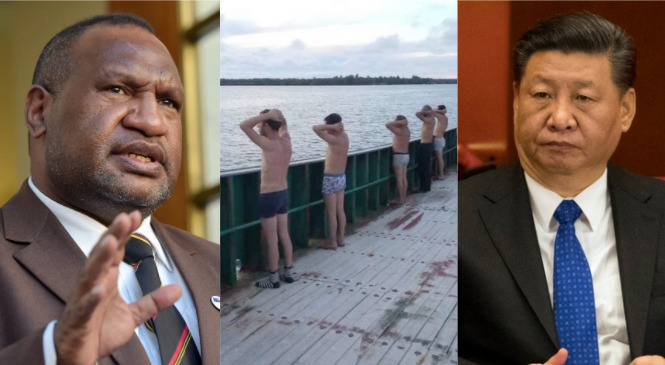 Australia is winning the Pacific battle against China. The strategically located Papua New Guinea- an island country just to the North of Australia that serves as an outpost in the Western Pacific is fast turning against China. Some back-to-back developments clearly suggest impending fallout between Beijing and Port Moresby.

Earlier this week, Papua New Guinea (PNG) Defence Force’s Maritime element intercepted what has come to be described as a suspected Chinese vessel. The unregistered ship was operating illegally in PNG waters between Kavieng and the strategically located Manus Island where the US and Australia are developing the joint Lombrum Naval Base to contain Chinese influence in the Pacific.

According to EMTV, PNG’s oldest television station, sources from the Lombrun Naval base said that eight crew members of the Chinese vessel have been detained and one of them is undergoing treatment at the Kavieng General Hospital after receiving gunshot wounds.

EMTV has further stated that as per a source, the aggressive action by the PNG Navy was taken only after non-compliance from the vessel crew who refused to allow the PNG Navy to board the ship. Interestingly, the same vessel was also intercepted in 2017 in Milne Bay waters, when cocaine was seized from it.

The crew refused boarding, after which one Chinese crew member was shot. In 2017, the same vessel was intercepted in Milne Bay carrying cocaine.
Via @Tavurvur pic.twitter.com/K96koXINYM

Presently, the eight crew members detained by Papua New Guinea are undergoing interrogation with assistance from the Australia Federal Police.

But this is certainly not the first time that the small island country of Papua New Guinea has directly stood up to Chinese aggression. Only a few days ago, there was a major controversy after a Chinese state-owned company, the  China Metallurgical Group Corporation (MCC), which controls a major nickel mine in Papua New Guinea said that 48 staffers who returned from China earlier this month may test positive for COVID-19 because they have been vaccinated.

No COVID-19 vaccine has been found till now and therefore it became clear that Beijing was using the Pacific island country as a laboratory for live testing of its substandard vaccines. Till now, Papua New Guinea has managed to keep the Chinese virus at bay and therefore the vaccine controversy came as a major provocation.

PNG, however, reacted sharply and Papua New Guinea’s Pandemic tsar David Manning told AFP that he demanded an answer from China and also blocked a Chinese flight carrying 150 workers on board due in Port Moresby.

Even before the vaccine controversy, the PNG-China relations had started falling apart. Last year, an Australia-funded study ordered by Papua New Guinea’s National Cyber Security Centre had revealed that the National Data Centre in PNG built by the infamous Chinese tech major Huawei with a loan of 53 million dollars from the Export-Import Bank of China had major cybersecurity flaws.

Now, the PNG government is refusing to pay back the loans as China was using this data centre to spy on the affairs of Papua New Guinea. This was the first sign of major fallout between China and PNG that has now accelerated further.

The Scott Morrison government in Australia has played its cards really well. Of late, China has emerged as a real ideological and strategic threat to Canberra. And it isn’t a good idea to have your adversary gain foothold in your strategic backyard. As an early China hawk, Morrison saw that China is gaining a strategic advantage in the poor island nation by lending millions of dollars.

Moreover, the lack of transparency in China’s influential PNG plans necessitated a pushback from Australia.

The geographic location of Papua New Guinea is such that it forms Canberra’s strategic backyard in different ways. Firstly, it is located very close to Australia in Oceania- the natural sphere of Canberra’s maritime influence. And secondly, Australia and the United States are jointly developing the Lombrum naval base at PNG’s Manus Island that will augment the maritime capabilities when it comes to containing China in the Western Pacific.

When developed, the Lombrum naval base will be only the second American military base, after Guam, to be located just outside the “first island “chain that extends from Japan to the Philippines and Indonesia, thereby encircling China in its backyard and reducing it into a green-water Navy. Moreover, unlike Guam, Lombrum will be outside the PLA’s strike capabilities and therefore become a threat to China beyond its reach.

Australia cannot afford to lose PNG and therefore Morrison is making all attempts to orchestrate an irreconcilable rift between the Beijing and Port Moresby. As such Morrison seems to be succeeding thus far as the small Pacific Island country of Papua New Guinea continues to confront China.