‘Economy of Pakistan will be destroyed,’ Imran Khan cries out as India gets set to reveal money trail of Pulwama attack to FATF 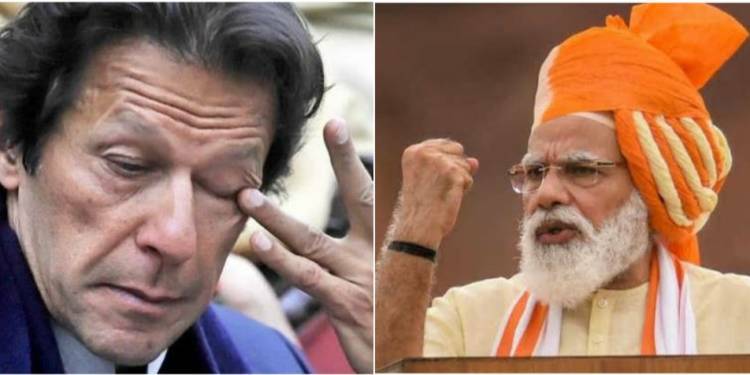 Pakistan’s woes know no end and are all set to be augmented with the Financial Action Task Force’s (FATF) review of the terror nation’s performance in fulfilling the 27-point action plan. The Islamic country is on the verge of being blacklisted by the international watchdog against terror financing and money laundering during its plenary session in October, wherein a final decision on the blacklisting of Pakistan will be taken. For the past two years, the terror state has failed at fulfilling the 27-point action plan of the FATF, leading to its clubbing in the “dark grey” list, a move which is already severely battering the Pakistani economy.

Now, with India’s National Investigative Agency (NIA) filing a charge sheet in the Pulwama terror attack case, Pakistan’s hopes of getting some degree of respite from the FATF stand obliterated. The reason being, India is all set to nail Pakistan at the FATF for the money trail which has been uncovered in the case, implicating JeM Chief Masood Azhar and Pakistani banks no less, even as the government of Pakistan did nothing to prevent the blatant terror financing.

According to a report by TOI, the money trail worth Rs 10.43 lakh of cash deposits made by Pakistan-based Jaish-e-Mohammed (JeM) masterminds into the bank account of Pulwama attacker Mohammad Umar Farooq for the purpose of financing the February 14 suicide attack is all set to make India’s case stronger for getting Pakistan “blacklisted” at the FATF plenary in October. By submitting the financing details of the terror attack to the FATF, India is well poised to make life for Imran Khan a living hell and is all set to prove how fragrantly the terror state has failed to honour its commitment in putting a curb on jihad emanating from its soil.

While having an expected meltdown, Pakistan’s dummy Prime Minister went on to rant over how the already battered economy of Pakistan will be further pounded if India’s aims of getting his country blacklisted by the FATF succeed. “It will impact the Pakistani Rupee and when Rupee starts to fall, we do not know how much it will fall. We do not have foreign reserves to save the Rupee. When rupee falls, everything will become costly–electricity, gas and Oil. Once we are on the blacklist, our entire economy will be destroyed due to inflation,” Imran Khan said during an interview.

Meanwhile, India’s foreign minister, Dr. S Jaishankar while indicating that Pakistan was forced to take cosmetic steps in the direction of acknowledging the presence of terrorists on its soil and sanctioning them, said, “As we have seen last week, sustained pressure through international mechanisms to prevent the movement of funds for terror groups and their front agencies can work. It has eventually compelled a state complicit in aiding, abetting, training and directing terror groups and associated criminal syndicates to grudgingly acknowledge the presence of wanted terrorists and organised crime leaders on its territory.”

As reported by TFI earlier, the US too will not be sparing Pakistan for its deeds at the FATF. Pakistani nationals were found to be allying with the Islamic State Khorasan Province (ISKP), in order to sabotage the US-Taliban peace deal. This will definitely go a long way in denting Pakistan’s prospects of evading a blacklisting by the FATF.

The clincher, however, remains India exposing before the FATF Pakistan’s elaborate network of financing terror in Kashmir, by no less than placing irrefutable evidence at the plenary about an attack which claimed the lives of over 40 Indian security personnel last year. It must be remembered that in another cosmetic attempt at evading the tag of being declared a global financial criminal, Imran Khan had sought to pass two legislations through the country’s parliament, which were however struck down by the opposition in the ‘senate’.

the opposition ldrs have become desperate to save their corrupt money by trying to prevent parliament from functioning; by seeking to undermine govt's effective Covid 19 strategy – a recognised global success story – & now by trying to sabotage Pak efforts to exit FATF grey list.

It is highly unlikely that Pakistan manages to scrape through FATF blacklisting this time around. With the terror nation’s godfather and sponsor – China itself facing global backlash due to the CoVID-19 pandemic, there is no saviour awaiting Pakistan at the FATF plenary in October.

Taro Aso could be Japan’s next PM after Shinzo Abe. But worry not, as he hates China and loves India