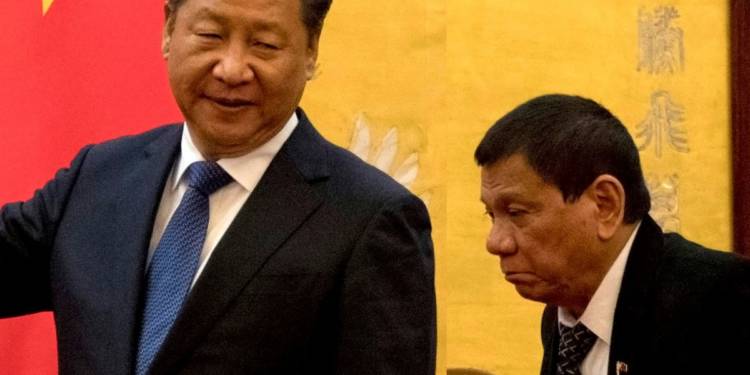 The Philippines President Rodrigo Duterte will call in the US Navy if China makes a move in the South China Sea. We are not claiming this, it is the Philippine Foreign Secretary Teodoro Locsin Jnr who has threatened to invoke its defence agreement with Washington if China attacks Filipino naval assets in the disputed waterways. The latest decision comes amidst growing Chinese aggression against the Philippines in the contested waterways.

Teodoro’s remarks mark a new chapter in the South China Sea dispute. For the first time, Manila has expressly announced that it would turn to the Pentagon for aid if things get down to the wire. This also marks a complete transformation in the Filipino foreign policy. Manila is therefore going back to its pro-US and anti-China roots by declaring that it has chosen the US over China.

The Philippines President Duterte has been blatantly pro-China in his approach since he took over the Southeast Asian country in the year 2016. In October 2016 itself, Duterte had announced that he had “separated” from the US to be “dependent” on China “for a long time”.

Duterte’s proximity to Beijing came at the expense of Washington-Manila ties. Recently, the Filipino President had announced that the Philippines would pull out of the visiting forces agreement with the United States, a two-decades-old military pact between the two countries. But Manila has suspended plans to pull out of the military pact owing to ‘political developments in the region.’

Now, the Philippines has once again snubbed Beijing to become a traditional US ally. But while earlier, the Philippines was only seeking rapprochement with the US, now Manila is saying that it would completely align with Washington.

The Philippines Foreign Secretary also said that Manila would continue its air patrols over the South China Sea despite Beijing describing them as  “illegal provocations”. Teodoro said, “They can call it illegal provocations, you can’t change their minds. They already lost the arbitral award.” From making the Arbitration award a secondary issue, the Duterte administration is weaponizing it now.

Teodoro added, “[But if] something happens that is beyond incursion but is, in fact, an attack on say a Filipino naval vessel … [that] means then I call up Washington DC.”

And the Philippines is not even letting the security threat that China is facing from the reinvigorated Filipino-American alliance. In fact, the Philippines Foreign Secretary has also refused to go into specifics about when the Philippines would call in the US Navy for help. He said, “I will not discuss that because the essence of deterrence theory is uncertainty.”

Duterte has shocked Beijing by reneging on what was being called a ‘pivot’ towards China. Till not very long ago, it was being believed that China had successfully stolen the US ally- Manila.

However, Duterte is clearly irked by Chinese transgressions. The fact remains that China hasn’t been able to pour in the kind of investments which the Philippines President was expecting at the start of his tenure. Moreover, China still maintains artificial islands in the Philippines’ EEZ backed by asymmetric military power in the Dragon’s favour.

What the Philippines has now done by choosing the US is that it has set a precedent against China. Remember, the Philippines is not the only country facing Chinese aggression in the contested waters. A number of Southeast Asian countries including Malaysia, Vietnam, Indonesia and Brunei are facing similar belligerence from China. Beijing continues to claim the territorial waters as far as 2,000 km away from its baseline by applying the “nine-dash line” theory.

The Philippines is the first country to join a prospective US alliance in Southeast Asia. When other ASEAN countries also face the difficult choice of choosing between the US and China, they are likely to go with the former. The ASEAN remains the biggest trade partner of Beijing, but the Southeast Asian nations are finding it increasingly difficult to resist the option of an American alliance in the face of unstoppable Chinese transgressions.

As such the Philippines has given a loud and clear message- stop cozying up to China, or else the mighty Dragon will gobble you up too. And this message is going to resonate loudly in Southeast Asia.