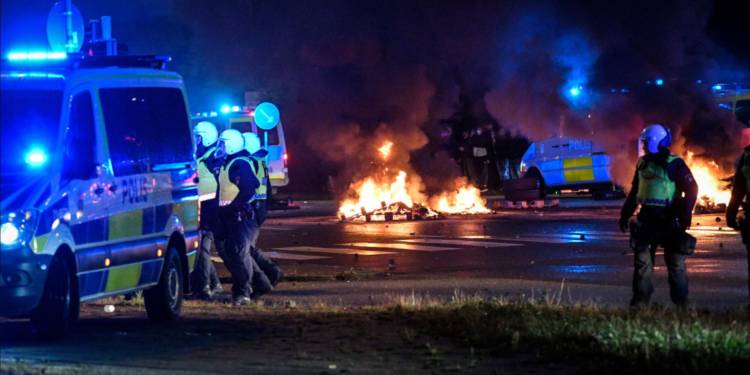 What India saw happen in Delhi at the beginning of the year and in Bangalore last week, the European country of Sweden saw it yesterday. Riots erupted in the city of Malmo where radical Islamists went on a rampage and razed public property, destroyed police cars, and pelted stones on the law and order officers.

It all started when Rasmus Paludan, who leads the far-right Danish anti-immigration party Hard Line (Stram Kur) was denied entry into Malmo to hold a meeting about “Islamization in the Nordic countries” where it was rumored that the Quran would be burned.

But authorities pre-empted Paludan’s arrival by announcing he had been banned from entering Sweden for two years and was later arrested near Malmo. His arrest sparked outrage among his followers who then went ahead with the rally and set a copy of the Quran ablaze.

However, by night, angry Muslim mobs started hitting the streets and shouted chants of ‘Allah hu Akbar’ while setting tyres on fire.

The incident triggered radical Islamists to take to the streets and unleash violence. While the rioters first protested against the actions of the group, they soon resorted to burning tyres and pelting rocks at the police.

The rioters akin to the Delhi-Bangalore manual of rioting started pelting rocks at vehicles and police personnel who were trying to maintain the law and order situation in the city. Several police officers were injured during the exchange of rocks from the hostile Muslim mob.

In a statement, the police have informed that they are trying to restore the law and order situation in Malmo. “We don’t have this under control but we are working actively to take control. We see a connection between what is happening now and what happened earlier today,” a police spokesperson, Calle Persson, was quoted as saying.

The actions of ‘Hard-Line’ Party were absolutely condemnable but the reactionary response of radical Islamists was equally ghoulish. Off late, it has become a trend where Islamist mobs take the law and order in their hands and go on a rampage.

A customary look at the events that have been unfurling across Europe for the last several years will be enough to paint a picture that Islamist mobocracy is on an upward incline.

Islam is the fastest-growing major religion in Europe, primarily due to immigration and higher fertility rates among Muslims. With the middle east and the African continent in a constant state of turmoil, immigrants from Muslim countries like Syria and Libya have started to appear in numbers in Western Europe, especially in Germany, France, and Belgium.

These demographic shifts have already led to political and social upheavals in many European countries, especially in the wake of the recent arrival of millions of asylum seekers, many of whom are Muslims.

After accepting the Muslim refugees with open hands and seeing the effect it had on the French society, Emanuel Macron—the French President has taken a 180 degree flip on his stance

“We must never accept that the laws of religion can be superior to those of the Republic.” Macron had said in February earlier this year in a powerful speech at Mulhouse.

Since the Charlie Hebdo attacks in January 2015, the country has been in an almost constant state of alert. It has experienced massive attacks, like the November 2015 Paris attacks and the July 2016 Nice truck ramming, and an almost monthly slew of low-intensity acts of violence often perpetrated by individuals linked to or simply inspired by the Islamic State.

The EU’s headquarter is in the country of Belgium and Islam has become the second-largest religion in the country after Christianity. The effects of radicalization are already being seen by Brussels. In 2016, Belgium had more “foreign fighter” travelers per capita than any other Western nation.

In 2019, the State Security Service listed 100 organizations in Belgium that promoted Salafist ideology including mosques, community centers and educational establishments. These Salafist institutions claiming to be representing the Muslims disregarded the Belgian rule of law and tried to promote the Sharia law in the country.

The deadliest terrorist attacks in Belgium’s history–the Brussels bombing on the morning of 22 March 2016 also had the connection of ISIS.

And its not always about terrorism when the debate of Islamic radicalization props up. The concerns about Islamism go well beyond terrorism. A pattern has emerged where nonviolent Islamist groups, wh­ile largely operating within the boundaries of the law, propagate an interpretation of Islam that drives a wedge between Muslims and non-Muslims, contributing to polarization and harming integration.

‘Kaafir’ as the Muslims like to call the non-Muslims are dubbed inferior in the eyes of Islam and some interpretations of Muslim preachers even argue that Kaafirs are subjected to be ruled over by the Muslim world.

In Germany, the King Fahd Academy sponsored by Saudi Arabia had to be forcefully closed down after news reports emerged stating that the centre was a hub for extremists and attracted Islamists to the country. The Wahhabi ideology has spread wide and far in Germany where Muslims now make up nearly 6 percent of the population.

The examples are aplenty, one Muslim preacher had even called for converting Buckingham Palace into a Mosque with dome and Minarets. The conversion of the Byzantine era church into a Mosque by another radical Islamist regime of Recep Tayyip Erdogan should be enough to point out that extremist Islamist ideology only looks to annihilate the non-Muslim identity. A disturbing trend is emerging in Europe and if the countries still sit back and do nothing than incidents like Malmo will be a regular feature.

Of Islamists and riots: What the rest of Europe needs to learn from Poland