‘Build a fortress, attack Buddhism,’ China is afraid of losing Tibet as India, US, Taiwan stand with the Dalai Lama

Tibet is now a major concern for Xi Jinping 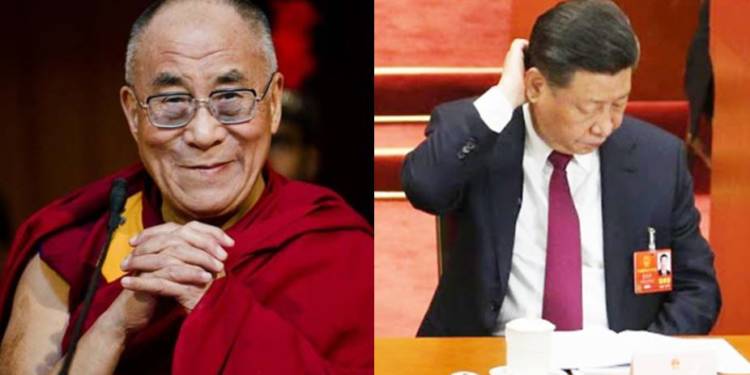 As the judgment day comes close for Beijing, it is busy tying up its loose ends and as it turns out there are far too many of them. Now, the Xi Jinping is busy preparing for an upcoming global assault that it is going to face over its illegal occupation of Tibet, an ancient Buddhist kingdom that was illegally invaded by China in the year 1951 when the US was busy fighting the Korean War. After Xinjiang and Hong Kong, Tibet is on the mind of the Western world when it comes to holding China accountable.

Tibet has to be the trump card for Beijing’s enemies like India and the United States. Therefore, as per SCMP, Chinese President Xi Jinping has asked the Communist nation’s highest-level meeting on Tibet to educate Tibetan public about fighting against separatism to “form an impregnable fortress in maintaining stability”. Xi also told the highest Chinese body on Tibet to focus on border security.

Jinping was speaking at the seventh Central Symposium on Tibet Work. It is China’s most important forum for its Tibet policy and has been organised for the first time since 2015. The timing of the seventh Central Symposium that consisted of military officials, law enforcement agencies, judges and local officials, is crucial as New Delhi and Washington have already started weaponizing Chinese occupation of Tibet.

Earlier this month, Chinese Foreign Minister Wang Yi had also paid a rare visit to the Tibetan region and had said that Tibet was of great importance to China’s overall development.

China is actually panicking due to the latest American offensive. In July this year, the US had said that it would issue visa restrictions against Chinese officials who are involved in “human rights abuses” and blocking diplomatic access to the Himalayan region.

The United States Agency for International Development (USAID) has given a grant of almost $1 million to the Central Tibetan Administration operating out of India, to “strengthen the financial and cultural resilience of the Tibetan people and contribute towards a sustained resilience of the Tibetan people’s economic and cultural identity.” And American lawmaker Scott Perry introduced a Bill which seeks to recognise Tibet as an independent country.

Moreover, the head of the Tibetan Buddhist culture, the Dalai Lama, has been getting more and more support from the outside world. Last year, the US Ambassador at Large for International Religious Freedom Samuel Brownback had rejected the Chinese claim on deciding the Dalai Lama’s successor and had said, “There are many people who follow the Dalai Lama and don’t live in China. He is a well-known spiritual leader throughout the world and deserves respect and deserves the succession process picked by his faith community…”

Recently, on his birthday, the Dalai Lama also received vocal support from China’s other arch-enemy, the Taiwanese government. In his birthday message to Taiwanese supporters, the Dalai Lama had said, “As the political scenario changes, it may be that I’ll be able to visit you in Taiwan again. I hope so. Whatever happens I’ll remain with you in spirit.”

The Dalai Lama’s remarks were well-received and Taiwan’s Foreign Minister Joanne Ou had said, “We will, in accordance with the principle of mutual respect and at a time of convenience for both sides, welcome the Dalai Lama to come to Taiwan again to propagate Buddhist teachings.”

In fact, the Tibetan cause is resonating even in countries like Slovakia. In the month of May, a group of 22 Slovak lawmakers issued a joint statement condemning the illegal detention of the Panchen Lama by China. The statement read, “It is a tragic milestone evincing the continuous crime being perpetrated by China not only against Gedhun Choekyi Nyima and his family but also against all the Tibetans.”

Back in the Himalayas, China is facing a stiff pushback from India on the Tibet issue. New Delhi is, of course, the most immediately affected stakeholder when it comes to Chinese occupation of Tibet. India has been hosting the Dalai Lama and the Tibetan government in exile since 1959. And Tibet has come at the forefront of Sino-India rivalry all over again because of the ongoing military confrontation in Eastern Ladakh.

Tibet would be the most strategic location under Chinese occupation in case of Sino-India hostilities as the PLA Air Force fighter aircrafts are supposed to take off from this region. New Delhi is therefore growing more vocal about Tibet after the Galwan Valley bloodbath in Ladakh on June 15 this year that resulted in 20 casualties on India’s side and much more, undisclosed casualties on China’s side.

It was after the Galwan Valley face-off that Prasar Bharati, the state-run public broadcaster, posted a tweet urging people to listen to the Tibetan World Service offered by All India Radio (AIR).

Things have however gone even further with the arrest of a Chinese spy from Majnu ka Tila in Delhi- a hub of Tibetan exiles in India’s National Capital. The spy was involved in a hawala racket worth Rs. 1,000 crores (approximately 136.7 million US dollars). Central Tibetan Administration (CTA) deputy spokesperson said, “The Chinese had come here for trade but were involved in spying over the Dalai Lama and was involved in illegal activities in India. We are already alert about Chinese spies. Whenever we organise a programme, Chinese spies come in the form of media personnel.”

India is thus bringing out China’s dirty Tibetan games out in the open. New Delhi is telling the world how China continues to violate Tibet at a time when the Himalayan region is becoming strategically crucial with rising military tensions between India and China.

China knows that India and the US will not let its continued occupation of Tibet go unpunished and therefore Xi Jinping is asking his men to buckle up and somehow save things from going out of Beijing’s hands in the occupied country.